Way back in 1703, French settlers in Mobile, Alabama – at the time, the capital of French Louisiana and not much more than a tiny settlement attached to Fort Louis de la Mobile – decided to celebrate Shrove Tuesday with a feast and a party. Over the next few years, the celebrations grew more elaborate, with the first known parade taking place in 1711: the Boeuf Gras (“fatted ox”) society put together a large papier mache cow’s head and rolled it through town on a cart, which I’m sure made a lot of sense at the time.

(It is at this point that native Mobilians, like myself, like to point out that New Orleans wasn’t even founded until 1718, and that New Orleans’ oldest continually-parading organization, the Mistick Krewe of Comus, was founded by six guys from Mobile. Ahem.)

And so today we celebrate Fat Tuesday – the last hurrah before Lent – by dressing up in funny clothes, drinking to excess, dancing in the streets, and hurling moonpies at each other. To celebrate, I thought I’d share an interesting symbol and recommend an excellent documentary film on Mobile Mardi Gras, director Margaret Brown’s The Order of Myths. 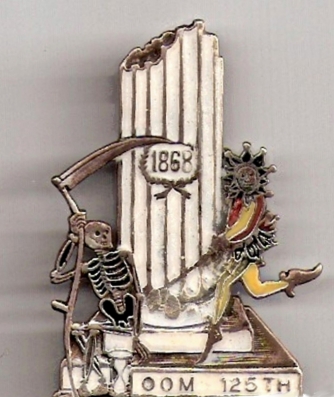 What we have here is Folly chasing Death around a broken Ionic column, while whacking Death with gilded pig bladders; seeing as how during Mardi Gras the normal social order is overturned, why not the natural order as well? Here’s a similar image from a float: 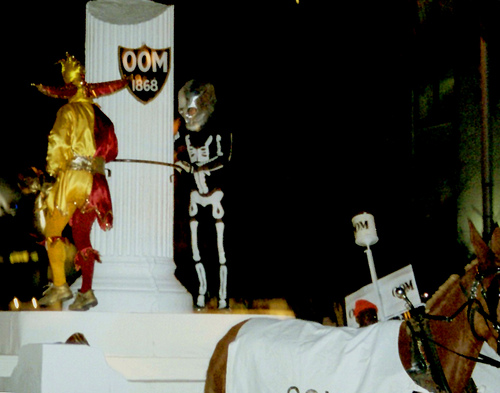 To me, these images sum up a lot of what’s great about Mardi Gras: it’s a finger in the eye of mortality and a celebration of a kind of genial lunacy. But what about that Ionic column? Well, the decoding gets a little stickier there.

I’ve heard a couple of different explanations: one is that the column represents time, the other that it represents the Confederacy or the Old South more generally. It gets a little more complicated when you look at it in context: this particular image is the emblem float of the Order of Myths, and is pulled by mules and lit by gaslight lamps – which are carried by young African-American men – in the same manner it has been since the founding of the organization shortly after the Civil War. Mobile’s mystic societies, you see, remain firmly segregated, which brings me to Margaret Brown’s excellent film.

Brown – whose first full-length documentary, Be Here To Love Me, is an excellent if crushingly depressing film about Texas songwriter Townes Van Zandt – is a fellow Mobile expat, and her film examines the complexities of race, class, and collective memory in Mobile as embodied in the 2007 Mardi Gras season. She focuses primarily on the two parallel Mardi Gras courts and documents some tentative steps toward integrating the two. I won’t say much more, for fear of spoiling the film for you, except to remark that the past is very much present in the film, in ways that both William Faulkner and Pierre Bourdieu would appreciate. And I’d also add that Brown eschews a heavy-handed or didactic approach in favor of laying the situation out for the viewer and letting them draw their own conclusions, with a few subtle editorial decisions and one late-in-the-game revelation that throws much of the previous hour and a half into a new and intriguing light. Here’s a trailer for the film:

My only real criticism of The Order of Myths is that Brown focuses primarily on the Mardi Gras elite – a little of Joe Cain Day (held the Sunday before Fat Tuesday and known as “the People’s Parade” because pretty much anybody can be in it if they can get a slot) would have gone a long way: class in Mobile is not quite coterminous with race, after all. There’s a lot more to Mobile Mardi Gras than the royal courts, and we don’t really get to see much of that. Similarly, the school featured in the film is more integrated than you’d think, as are the crowds along the parade routes, given what’s shown in the film.

But these are relatively minor points – by and large, Brown tackles the subject with a keen and incisive eye, and I’d highly recommend it to anyone teaching a class on race in the United States.

For the record, the title of the post translates as “time flies, remember you are mortal, party on.”

I'd like to point out, completely unsociologically and pointlessly, that both "Tempus Fugit" and "Memento Mori" are names of X-files episodes. And I was really excited about that for a moment.

Heh - I totally missed that. I nicked it from an album of murder ballads. And, I guess, Bill and Ted's Excellent Adventure.

Mules, not donkeys, they are different you know.

Um...yeah...see...uh...Oh, I've got it: since the OoM parade is the last one on Fat Tuesday, it's fairly impressive that I don't remember them as pink Shetland ponies.

But thanks for the correction! Gwen, could you fix that in the post? I'll mail you a moonpie.

Hey, I'm glad someone posted something about Mardi Gras. There is so much you could say about it from a sociological perspective. For example, Muses, the famous all-women Krewe uses a stiletto heeled shoe as its symbol. Zulu, the all-Black Krewe uses the coconut and rides in black-face. But there are reasons behind these traditions, so if taken out of the context of history they can lose their meaning.

Here are my pictures of New Orleans Mardi Gras: http://heatherleila3.blogspot.com/2009/02/mardi-gras-2009.html

Indeed. Mardi Gras is (at least to me) endlessly sociologically fascinating. The downside, of course, is that many aspects of it become a lot less fun if you look at them critically or analytically.

(Also, you really haven't breached a norm until you've said something critical about Mardi Gras in front of a local. You're not only throwing yourself up against "History!" and "Tradition!" but the deeply held, widely shared - dare I say institutionalized - sense that "It's a party, stupid!" which means its understood to be pretty much out of bounds and tasteless, even, to look critically at it. Ah, taboos.)

There's also another documentary, which I haven't seen yet, Mardi Gras: Made in China, which concerns the globalized commodity chain that brings beads from factories in China to American parades. I hear it's excellent.

What a rad jam at the end of that video! I keep replying the last 30 sec. just to hear the band. Anyone know anything about the movie soundtrack? Also props on the X-Files catch Jasmine!

It's a high school marching band from somewhere around there - if I'd had more school spirit in high school, I could tell you. (I can only say it's not the Murphy Panthers, 'cause we were blue and gold.) I think they say in the movie, or maybe their sign is visible, but I don't know about a soundtrack.

They really are great, though, aren't they? Also, keep in mind they're marching for *miles* lugging all that brass and all those drums.

Thanks this design is very good..,

Thank you! I liked the article! I love how you write beautifully.,

what gives you that idea?,

Thanks for your insights

However, if we are talking simply about the sensuous differentiation of one kind of subjectivity from another, bats from those without a sonar modality, sighted humans from ones that are blind at birth, it's hard to see how the blank wall isn't there from the start and forever. ,

Claims of historical or religious ties of Jews with Palestine are incompatible with the facts of history and the true conception of what constitutes statehood. ,