Have a Conversation Over Dinner, Risk Obesity

The Active Life Movement has produced these ads as part of their campaign against childhood obesity: 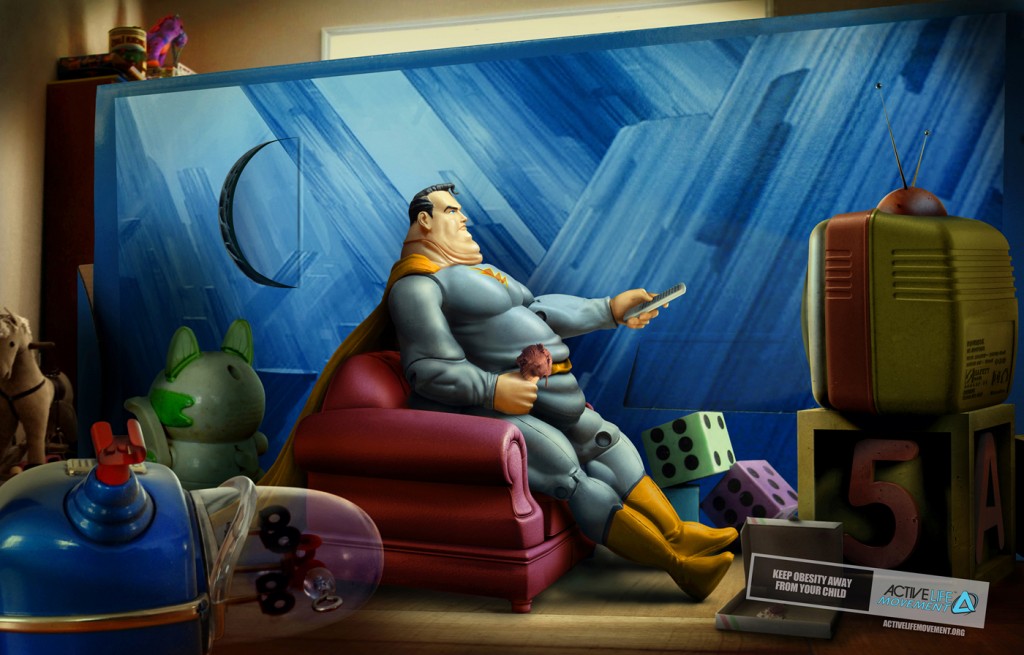 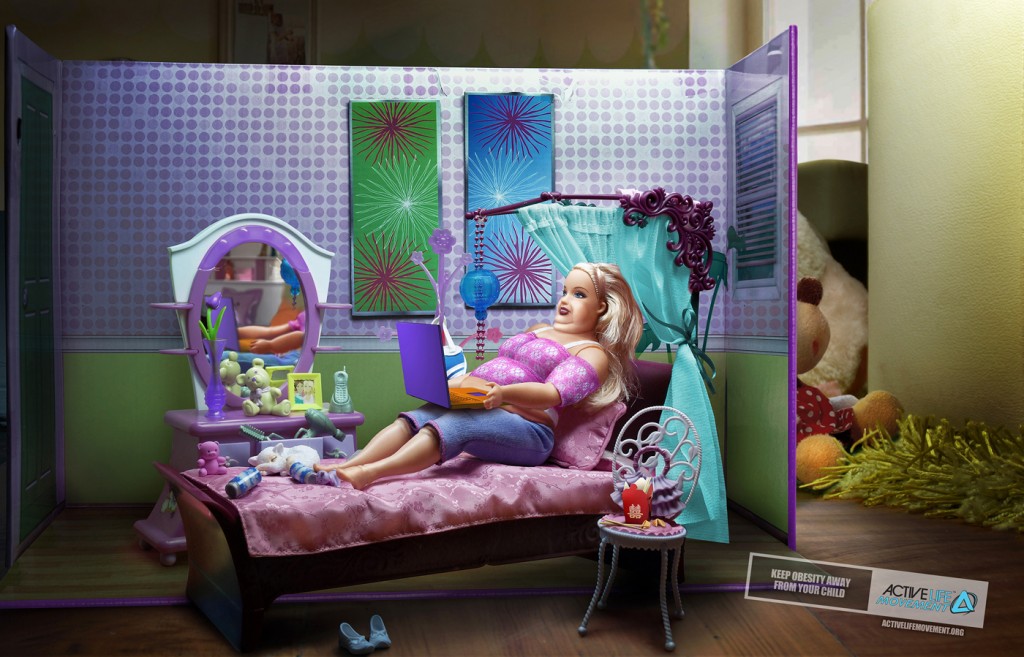 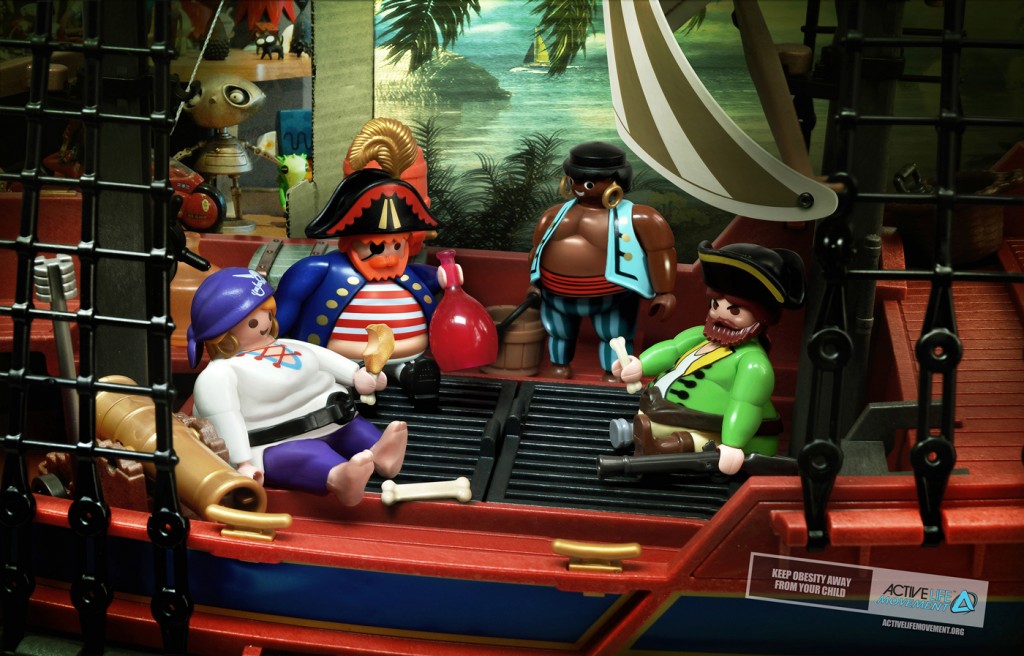 What irks me about this ad campaign is the negative message (i.e., the implicit “don’t”).  The message is: Don’t look like this.  And, maybe secondarily: Don’t eat a lot, watch TV, use your computer, or have conversations (?).   It’s ultimately restrictive and shaming.

The message could be a positive one (i.e., an implicit “do”): Do go outside, play, learn to dance, enjoy nature!  All of those would (presumably) accomplish the goals of the Active Life Movement without shaming people who don’t look like Barbie, Superman, or Legos (?) and who like to eat food, watch TV, be on the computer, and sit down sometimes.

Ultimately, then, instead of promoting the behaviors the organization likes, the advertisers resorted to reinforcing fat phobia/hatred and the stereotype that fat people just sit around and eat.

I am the exact same pose as the Barbie figure right now. What annoys me about these adverts is that you could read them as saying that if your child doesn't know about fat people, they won't become fat ('keep obseity away from your child'), a sort of 'protection' of children from the world which has also lead to this sort of thing.

Also, in follow-up to the (?) in your post, I'm fairly sure that the toys in the third image are Playmobil.

@Am-Chau That's terrible. I know how heartbreaking it is to scare kids unintentionally (I have a beard). She really doesn't need these horrible "concerned" parents making it worse.

Kids need to see as many different-looking people as possible as early as possible. These concerned parents are an excellent example of what happens if they don't.

"All of those would (presumably) accomplish the goals of the Active Life Movement..."
The thing is, if the 'aim' of the movement is really to reduce/eliminate fat people, they wouldn't. Granted, movement, healthy food, etc, would certainly benefit everyone's health, but they certainly wouldn't turn naturally fat kids into thin ones.

The third picture is Playmobil, incidentally.

There's an article up at Wiretap magazine that talks about this advertising and its relationship to childhood obesity among Latino youth.

I thought the same thing, Chuk, so I wrote one:
http://disstud.blogspot.com/2009/02/cerrie-burnells-arm.html

How is the ad saying "watch TV, use your computer, or have conversations (?). "? It is just showing overweight people in situations that are easily related to obesity (sendetary behavior). It doesn't campaign against watching tv, or anything specific, it campaigns against sedentarity.

I mean, who the hell would run an ad against conversations or computers? Makes no sense. The ad is just a way of saying "don't do this all day or you'll end up like that".

I really don't think these are so bad. I mean, this is the Active Life Movement, and it seems to me that they are about campaigning against sedentary lifestyles generally. Using toys and colourful imagery would more likely appeal to kids which may encourage a discussion with their parents.

I really don't think this is trying to scare kids - look at the tone of the message! There is nothing threatening or scary about it!

I find it interesting that they used toys that model very strict gender body ideals. Barbie as we all know is impossibly proportioned and Superman has become over the years truly a super man in the size of his muscles (biceps, shoulders, etc.).
Why did the advertisers choose to use these particular two models that represent unrealistic body types, then make them fat to even further reinforce the idea that if you are not this body type, you are unacceptable.

The more fundamental problem with this campaign, along with others targeted to childhood obesity, is that it's an example of 'blaming the victim.' The hegemonic ideology in our society is to focus always on individuals rather than social structures -- if kids are obese, it's THEIR problem because they are eating the wrong foods and playing on computers etc rather than exercising. So the solution is to target their "awareness" of their wrong choices.

But if we take one step back from these failed individuals, we find a gigantic corporate structure asking them if they want fries with that and offering to supersize their sugary drinks. Even at this level, I can't understand how hanging a few posters or running the occasional psa showing kids how bad these choices are is supposed to counteract this multibillion dollar advertizing campaign enticing kids to eat poorly?

But ultimately, even the corporations are not to blame here -- we need to look at the larger structures that create situations were kids are age segregated all day,no longer part of an extended family, let alone brought up by 'the village'. But nobody wants to talk about work-family conflict, or post-industrial structures in advanced monopoly capitalism, when you can just point at a fat kid and say, "Just say no!"

[...] Sociological Images » HAVE A CONVERSATION OVER DINNER, RISK OBESITY [...]

Oh, there is so much going on here. First of all, people who are fat or "obese" aren't necessarily less healthy, more prone to disease, or at risk to die earlier. Correlation is not causation. A classic sociology example is that just because robberies go up when people eat more ice cream doesn't mean that ice cream causes robberies. It's summer. Even if fat people do tend to be less healthy, why would that be? The automatic assumption is that it's because of the fat...or it's because of the sedentary/overeating life that they obviously lead because they are fat. So the idea is that sedentary lifestyle causes both fatness and "unhealth". But hello, that ignores a million other factors that a) could cause fatness and b) that could cause "unhealth". Fat people's health is affected by the stigma and discrimination they face, and this stuff is documented in the literature. Shaming, which fat people generally face on a daily basis, is connected with a lower likelihood to engage in "healthy" behaviors. Doctors give fat people a lower quality of health care. Fat people don't go in for preventative care. Do these things not affect health outcomes? Can we have an accurate model without including these factors (and others)? I mean, it's all so ridiculous. Latino/as tend to be poorer proportionally, as do African Americans. If you're working two jobs, when do you have time to work out? Can you afford to put your kids in sports? Do you have time to deal with that? Is your community safe enough to let your children play? What kinds of foods are most affordable? Hmn, and with fat people of color we have added stigma that is ALSO known to have an effect on health, both on the micro and macro levels. And I'm not even getting into the various proposed causes of fatness, which are many, many beyond "sedentary/overeating".

And finally, this isn't scary or harmful? How about to the fat kids who see themselves in these pictures because that's what their bodies look like and the message is that their bodies are bad and horrible and no one should want to be that way? And unless they can escape those bodies they are bad and horrible? And at the same time we ignore eating disorders among minorities because we assume they do not exist, since they are mostly a bunch of fatties and could stand to lose the weight. I mean, really. Not to mention that then kids will look at my body and judge me. Don't worry, they are getting the message.

So the health in fat people is damage by other people's reactions, they are not to blame for anything at all and trying to campaign against unhealthy lifestyles is bad because it hurts people's feelings?

I understand that there are many things that can contribute to a person being overweight, but that doesn't mean a person is clear of responsability.

"First of all, people who are fat or “obese” aren’t necessarily less healthy, more prone to disease, or at risk to die earlier"

That might be what sociologists believe. Medical doctors, who actually treat diseases, disagree. I know who I believe on this issue.