Does Being “Overweight” Contribute to Premature Death

Much of the discourse around the benefits of being thin revolves around the assumption that extra pounds are harmful to health.  Ampersand at Alas A Blog posted about a study in the New England Journal of Medicine (citation below) that shows that  those who are overweight (according to the BMI scale) are not at a higher risk of premature death than those who are deemed of “normal” weight.   The boxes in red are categories in which the risk for premature death is equal to or less than the reference group (normal weight people). 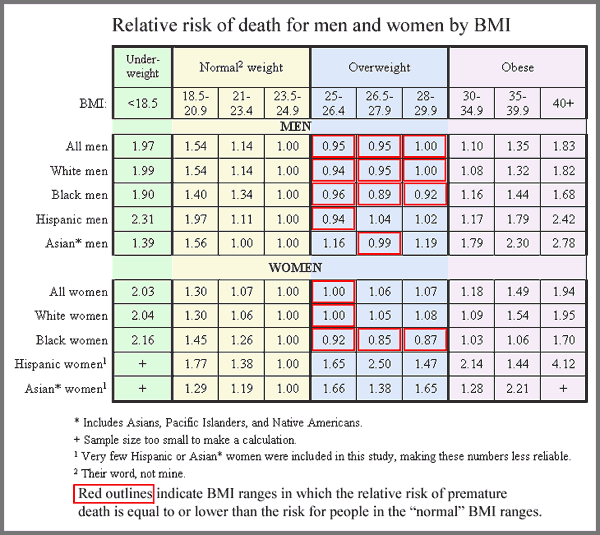 This is Ampersand’s conclusion (and his table, too).

The authors of the study, as commenter A.C. pointed out,  come to the opposite conclusion.  They argue, after looking at the data in different ways, say that overweight persons are at a higher risk for death.

Ampersand doesn’t buy it.  He offers a critique here where, among other things, he points out:

This might be a great way to discuss how methods and statistics never speak for themselves.

Relatedly, this post offers a really great visual critique of the BMI scale.

[...] that his medical opinion is discredited by his preoccupation with cultural weight norms and their exaggerated health implications. I recognize that he may be right, and I will research it. But his delivery was nothing short of [...]

What I think is the most fascinating is that the "normal" and underweight mortality seems to be HIGHER than that of the overweight-- for women, for example, those at the high end of the "overweight" scale have 1.07, whereas those at the low end of the "normal" scale are at 1.30. And for most men, all the "overweight" weights are healthier than the normal/underweight categories.

Two things: I am not a medical professional, but I looked up the Adams et al. study from 2006, and the table above is NOT from the original article. It may be a composite that the author of Alas, a Blog, put together based on the study findings -- but this should be made more clear. Also: the conclusion of the NEJM study (from the abstract) is as follows: "Excess body weight during midlife, including overweight, is associated with an increased risk of death." The authors' conclusion, whether or not it is scientifically sound (and there were serious questions about the methodology in the letter responses to the article), is the opposite of what you are reporting. Please take another look at the original study.

I checked it out and did a revision on the post.

When thinking about BMI, it's important to remember that healthy people with a lot of muscle mass are in the overweight category.

BMI is usually just an approximation that we use along with a detailed patient history to make predictions. Naturally, with the help of the media, people have gotten fixated on it and obsess about their BMI to the point of unhealthiness.

As an aside, I wonder what the confidence intervals and statistical significance of those numbers are.

Back to the earlier point...no one really uses BMI as a sensitive predictor of mortality. What's more reflective of that is a combination of activity levels, nutrition and genetics.

[...] has been discussed on this blog, and excellently at Shapely Prose, BMI does not translate directly into “health.”  But Nicolé did a great job offering some additional analysis of this policy.  She wrote: [...]

I find it especially interesting that the risk for death while being "underweight" is higher than the entire 40+ BMI category. I bet society doesn't tell you THAT when they flip about about the "obesity epidemic" and tell (white?) women that being skinny as a rail (but with big breasts!) is beautiful.

That observation goes against my entire experience as growing up as a white, middle-class female American from the midwest regions! "Skinny" has always been equated to "healthy," and yet these charts seem to show differently.

This is a fascinating chart, especially combined with historical charts (the "normal" or "healthy" weight recommendations have decreased since actuaries first started compiling them).

I have to wonder if these data are the result of a too small sample size. Otherwise, why does one group of overweight Asian men have lower mortality, but the younger and older groups show relatively higher mortality rates. I honestly don't think that this table tells us anything: mortality is a complex issue and comparing total mortality rates based on weight blindly isn't going to be very informative.