Women as Tools of Economic Development

In From Motherhood to Citizenship, Nitza Berkovich traces a global shift.  Sometime during the 20th century, nation-states became convinced that women could boost national economies and foster development.  Accordingly, states began thinking of their women as potential productive workers instead of reproductive mothers.  It was this economic argument, not necessarily a feminist one, that led to women’s incorporation into the public sphere as citizens (workers, voters, etc).

I was reminded of Berkovitch’s book by a short video sent in by Fran.  The video, produced by a non-profit called Girl Effect*, argues that if you get girls into school and give them cows, the world will be a better place.  As Fran puts it:  “Apparently, girls are only worth supporting if they improve the economy!” Here is an image from the website: 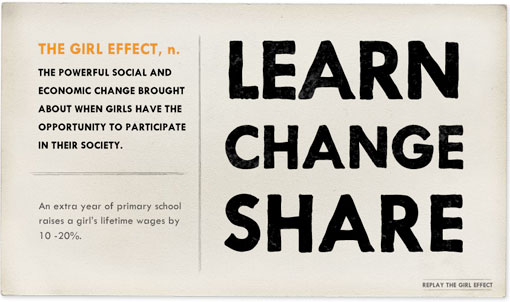 “Girl Effect” is defined as:

The powerful social and economic change brought about when girls have the opportunity to participate in their society.

The logic is not that girls deserve education or the opportunity to sustain their livelihoods (a feminist argument); the logic is that we should invest in girls because it is good for the world (a global improvement or humanist argument or something).  I’m not arguing that the former is better or worse than the latter, only pointing out that it’s interesting that feminist initiatives (helping girls) can be supported with non-feminist logics.

*  As an aside, I always think it’s interesting when and how people choose to use the word “girl” as opposed to “woman.”  In this case, I suspect the activists think girls are more sympathetic than women.  Kids always pull at the heart purse strings moreso than adults.  I suppose this is because we ascribe to children a sort of innocence.  That, in itself (though socially constructed), doesn’t seem troublesome… but, if we can give the benefit of the doubt, we can also take it away.  I always wonder, for example: When do boys growing up in poverty transition from innocent victims of circumstance to potential criminals?  When do their sisters transition to welfare queens?  When do we decide to retract our generous offering of benevolence and replace it with malevolence?  These are just things I wonder.

What? "Deserve" is a bad argument for change, especially against the resistant. Heck yeah, give some bare, selfish reasons why women should be treated equally.

[...] –articles, images, videos–, and they published some of it, adding their analysis: Women as Tools of Economic Development, On Being Genderqueer, Gender-Ambiguous People as Incomplete, the new Diagnostic and Statistical [...]

I doubt a feminist argument will have much of an impact or raise enough money/awareness - at least, not like an economic argument would. This is the best way to get many folks on board with helping women. Otherwise many people may and probably will resort to the cultural relativism claim ("but it's part of THE CULTURE for women to be uneducated baby-makers owned by their husbands! That's how they've done it for thousands of years, obviously it can't be that bad.")

I think sidestepping the feminist argument is an explicit goal of the people who produced the video. The most direct route to empowering women in the majority of the world in which women remain subclass citizens is to not engage directly with cultural views about girls and women, but to encourage education of girls because it has such powerful economic effects.

It is also the most effective way to improve the quality of life of women and girls in developing countries. Which is, imho, a valid feminist goal.

And "girl" rather than "woman" is important, because it is girls who are removed from school and have their education cut short. The education of girls impacts the women they become. Interventions geared towards girls have a much bigger bang for the buck. Although it is a short-term/long-term tradeoff.

A further quote from
http://www.cfr.org/publication.html?id=6947

I think the emphasis is on girls because it is easier to convince a family to give basic services to a girl before she is married off, than to convince the same family that the mother needs enough time and autonomy to get the same basic services. It's easier to keep a girl in school one more year than to teach her mother to read.

I don't mean that's good, but utilitarian, in the context of the campaign.

I just assumed they used the word "girl" to denote a child who would be "going to school". It seems like their talking about training young people. But perhaps 'young women' would be a better phrase.

i feel like maybe part of the reason they use "girls" as opposed to "women" is that we are more comfortable with the thought of educating young people, especially children. GOD KNOWS, after all, adults can never benefit from access to education. And when they try, we always make fun of them. I am on a college campus right now, and I don't think we've had a single standup comedian give a show that hasn't a joke of the "non-traditional students are all middle-aged women who ask too many questions" variety.

this reminds me of Prop 8, the musical, in which the argument is made that if gays can marry, limo drivers and cake bakers will make more money! yay, capitalism!

In From Motherhood to Citizenship, Nitza Berkovich traces a global shift. Sometime during the 20th century, nation-states became convinced that women could boost national economies and foster development. Accordingly, states began thinking of their women as potential productive workers instead of reproductive mothers. It was this economic argument, not necessarily a feminist one, that led to women’s incorporation into the public sphere as citizens (workers, voters, etc).

Ol Nitza is totally full of crap. Come on, people! This isn't sociological research! This is PC speculation based on paranoia and logical fallacies. If this is contemporary Sociology, we've got problems bigger than calling young women "girls" (which is what they are, by the way. It's not like calling a black person a nigger)

Always thought it was interesting that things that are stereotyped as being "feminine" (flowers, pink, handbags) are called "girly, while things considered "masculine" (trucks, blue, meat) are called "manly".

I don't think it's over-reaching to question society's apparent need for infantizing women.