Social psychologists have devised a genuis way to measure our implicit biases; that is, they have found a way to tap into those biases that we hold unconsciously and/or know better than to reveal in mixed company.  You can learn all about it and take all kinds of tests to reveal your own biases here.

One thing these investigations have revealed is that many of us internalize biases against the groups we belong to.  So, women can be sexist and people of color can be racist.  Even if people consciously reject these biases, they often sink in anyway and lead to a kind of self-dislike.

Someone sent in a postcard to PostSecret this week that illustrates just this phenomenon: 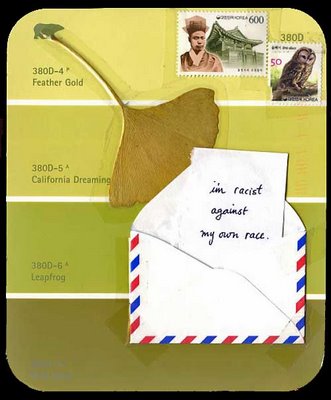 Very interesting. I'm a white, bisexual female; my results suggested that I was slightly biased against gay people and strongly biased towards black people and Barack Obama (the Obama part is certainly true).

Wouldn't you get 'better' at these tests with practice, though? And surely you could subconsciously skew them to get the result you wanted. Is it possible I scored 'more highly' on the election test because I'm more self-conscious about my attitude to race, and I'm more relaxed when it comes to sexuality? I'm not suggesting that's the case, but if it were wouldn't that affect the outcome?

FizzyGood, I'm not sure it would be so easy to alter the outcomes consciously. I'm queer and I try hard not to be heterophobic, but when I did the sexuality bias test, I just couldn't associate "gay" with negative words! I practically had to force my hand to press the correct button. The outcome? Bias towards gay people.

But I know the ugly face of internalized bias only too well; I used to be homophobic and transphobic, which made it hard to accept myself. That's probably what makes the suicide rates for LGBT youth so high.

Hmm.... "Your data suggest a slight automatic association between System and Justified." I'm not sure whether that's a good thing or a bad thing. I wonder if it stems from my engineering background.

I'm a bit concerned they may be biasing the results a bit by showing the cultural association first (at least in the tests I've taken so far) which is considered to be more racist/ageist/prejudiced. For example, on the ageism one, you first categorize old and young and good and bad. Then, after that, old and bad are on the same key, and good and young are on the same key. When they switch it to old and good and so on, of course I make more mistakes because I now have to juggle several concepts quickly and give up the associations I had before when I was learning it.

It'd be interesting to see how the results would turn out if they switched it around so that the less common association came first. I've also read that the logical part of the human mind can only keep 7 or less concepts in conscious thought at once, and this test has you juggle four categories, two keys, and a photo all at the same time. I wonder if maybe that was what they intentionally set out for, as I found I couldn't really do it quickly enough unless I went ahead and made the associations between the two words bound to a key.

I agree, Tim. I also think that the probability of your finger slipping and skewing the result is pretty high.

genderkid, I said SUBconsciously - given that the test is supposed to measure your knee-jerk responses, which originate in the subconscious, I think this is perfectly possible.

From what I know about these tests (which admittedly isn't much), they DO take into account the difficulty of switching fingers.

I took a couple and got different results. I tried to think less on the second. In the first, I strongly favoured whites, but in the latter, I didn't distinguish. I favoured McCain over Obama, which is false (I'm pretty sure).

Which brought me to the part that made me feel unsettled: the "I'm pretty sure." After the race one, it asked me a bunch of things about what I thought about the survey and whether I thought I had learned anything from it. I had a sense that I was supposed to, that the measures were effective, but I was disturbed because I couldn't think of any reason to think this other than the fact that the people conducting the survey were explicitly telling me it was--i.e. authority. I have no clue if I learned anything--I ask myself all the time whether I'm prejudiced, and try to work from there. Not sure if this test helps with that.

IAT is very interesting, but think it has an inherent flaw. While I do think there is some credibility, the problem is how we store words in our minds. For example, there was a paper about IAT and the close mental relationship between "Apes" and "African Americans." What I think this type of research reveals is that these ideas are stored close in our minds if you believe that our mind is a type of cognitive network with certain ideas tied more closely together. What this suggests is that America has tied Apes and African Americans via stereotypes. This is revealing. But making the case that we actually prefer or think of African Americans this way is a stretch. Instead, it suggests to me that these ideas are closely related in our minds -- even if you do not find this association valid or true at all. We know of this stereotype, and so are programed to place these ideas close in our mind. Like we may associate black/bad & white/good because of these same type of socialization. (or vice versa, if your socialization has been different).

That is my critique of the method. I am not saying there is no racism/sexism/heterosexism -- just a problem with this method of testing it.

A late comer (through various internal links)... but something nobody mentioned so far is the linguistic aspect of it all.
I have done the first one, with the weapons, where it suggested I am slightly more likely to associate black Americans with weapons. I somehow feel kinda dodgy about it, especually since many of the weapons shown weren't the ones associated in the media with 'thug media', but alright, I'll accept some unconscious link might be in action.
Then, being Israeli, a former student of Arabic and Islam, and generally with many concerns and dilemmas on the whole subject, I thought I'll try the Arab-Muslim name quiz. I stopped in the middle, because as a non-native English speaker, it's simply harder for me to read and process the words, and I think it harms the testing. When you need to take a mental step before you realise that 'terrific' and 'terrible' are 'good' and 'bad' respectively (I'm not sure if they use the word 'terrific', actually), it is no longer fully unconscious.

So, this test is in fact biased towards English-speakers.
They should have stuck with pictures, rather than verbal concepts.

[...] psychologists have shown, robustly, that any given member of a society, even those who are the target of negative stereotypes, will hold pre-conscious stereotypical beliefs common in that society.  (If you’d like to [...]

This study is bad science, plain and simple. I laud them for the attempt, and if it's helped people look a bit more deeply at their internal associations, and question themselves, that's wonderful. But the system itself is inherently flawed.

If you were to use association of blue and red with triangle and circle, and offered a monetary reward if the player performed well, the first time, it's very likely the spread would be similar. The reasons here are stress mixed with keymapping.

It's not the switching of fingers that's the big deal, it's the fast switching of associations. The fun thing about this system is it's likely to produce a higher bias in relation to anything the user of the system feels strongly about, regardless of which way they actually feel strongly about it. So if they were to precisely switch the order, the same people would likely score similarly, only in reverse.

It has to do with muscle memory and fast twitch responses. Humans are very good at finding patterns and responding to them quickly, and modern humans have trained very heavily in fast association and response patterns. This association is likely to be faster but more flawed if, on some level, there is something 'at stake'. Hence their results that women come across as actually more biased against women, etc.

They do switch the order in which the elements show up, as they state. But they do not, so far as I can tell, switch the order in which elements are -associated-. Each time I took it, the keyword association is first to the association that is 'most common', and then to the other. At the pace of the test, this means there is a quick link formed to associate the concepts, that the brain has trouble undoing quickly enough to score well on the second half of the test.

So, I'm sorry to say, I wasn't impressed.