Only Hearts Club Dolls: Alternatives to Barbie and Bratz 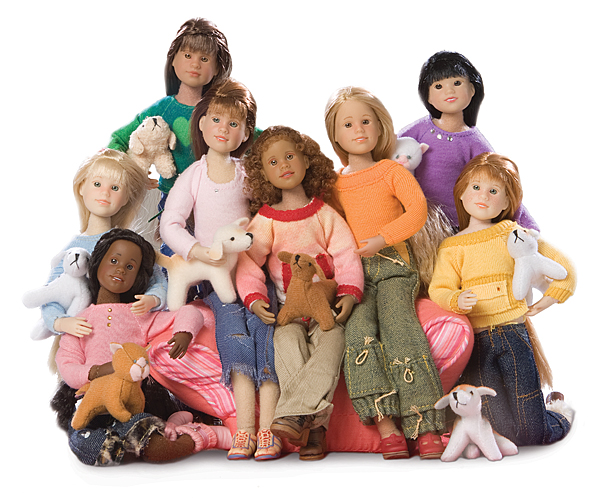 Because Barbies and Bratz dolls are so popular with young children, the products regularly get flak for revealing, sexualized clothing. [The Black Canary Barbie, for example, provoked outcry, which we covered in a previous post.] Old Hearts Club Dolls consciously set themselves in opposition to Barbies and Bratz. The About page on OHC’s Web site states:

Unlike any other doll, Only Hearts Club™ dolls combine detailed and realistic facial features with soft, fully-poseable bodies. The dolls bodies and clothing actually look like those of the young girls they are intended to be. The dolls’ fashions are hip, based upon what real girls are wearing, and are also age-appropriate.

“Realistic facial features” are in contrast those of Barbies and Bratz, who feature stylized, large eyes and lips. The “soft” bodies of OHC dolls are explicitly different from the hard plastic used to make fashion dolls. Finally, “age-appropriate” is code for “non-sexualized, non-revealing.”

While other alternatives to the popular fashion dolls have tried and failed to get off the ground [see August 15, 1991 New York Times article about the Happy To Be Me doll], OHC dolls have been going strong since 2004. For example, I have seen them in independent toy stores around the Boston area; toy stores have even sold out of them, much to my frustration when I want to purchase one.  You could use the story of these dolls in a conversation about portrayals of femininity in toys or current debates about “modesty” in fashion.

Wow, I immediately fell in love with those dolls. They, unlike many other dolls (i.e. barbie and bratz) look friendly, instead of just having a pretty face. My first thought was: " Wow, I'd like to have one of those as my friend."

I'm glad to see a doll that looks realistic, without being ugly (realistic dolls often look much older than they're supposed to be), and I am also happy to see all the different skin and hair types/colors. Obviously they have put a lot of effort into their image.

Those look like some really wondeful dolls! If I had a child, I'd definitely get one.

They should really make some boy dolls to go along with these, so that children can explore/act out gender roles in their play. Maybe it could help break the 'boys aren't allowed to play with dolls' barrier.

These remind me a lot of the "American Girl doll" line of dolls, formerly made by the Pleasant Company, but bought out by Mattel awhile back. American Girl focuses on historical time periods though, with a doll to represent different points in time (there's one living during American involvement in WWII, a pioneer, a girl living at the time of the Revolutionary war, a girl from a freed slave family, etc.)

I have to admit, to my eyes these dolls look rather frumpy and bland. Do you really think girls who are attracted to the Bratz-type dolls are going to find these acceptable substitutes?

The faces are also kind of creepy -- they're approaching the uncanny valley. Plus, despite the skin color differences, the lack of diversity is pretty obvious -- they all have the same (very European) nose, for instance. (These are problems brought up by making the faces "realistic" instead of cartoony.)

I like the Groovy Girls line, myself. They're not as sexualized at Bratz, but their clothes are funky and fun. My nieces like them -- but not as much as they like Barbie, alas.

I feel like everyone who writes on this blog is just looking for things to get their panties in a bunch about (oh, no! please write a blog about how I'm oppressing my own gender). Aren't there bigger things to worry about than advertising and literally DIGGING and REACHING for reasons to pin people with the tags of Racist, Sexiest, etc. etc.

This whole blog talks a lot about stereotypes. So here's one for you..

All of the stay at home moms whom produce this blog, you need to get jobs and start making a real difference in the world instead of sheltering your poor children. Oh, and stop gossiping about your neighbors at church, too.

I was thinking these dolls aren't particularly representative of the spectrum of children. The above commenters made some good points (Rebecca aside that is), but missed one I think is important: they all have the same bodies. Last time I checked kids came in all shapes and sizes.

I was also bothered by the fact that, when I saw the dolls in standing poses on the website, it is clear that most/all are much thinner than even 'average' girls, let alone acknowledging that there are many fat girls who are in even more desperate need of positive toy and media representations of themselves. (I can speak to the damage done by this lacuna in my own upbringing.)
And Rebecca, way to take pride in your ignorance of cultural analysis and to insult the scholars who write this blog.

Most little girls don't want to play with dolls that are supposed to be their own age. The entire thing about Barbies and Bratz is that they're adults, and with them little girls can pretend to do all the things they can't - have their own house and job, drive a car, go on adventures, get married, etc. What's fun about playing with dolls your own age? There's nothing they can do that you can't.

(Yeah, I claim expertise on this area :) I was a little girl who played Barbies with lots and lots of other little girls for a very long time, and now I babysit even MORE little girls who play with both Bratz and Barbies.)

Not another line of products that shows that there's only one type of "Asian" girl -- the shy one who skates. (see the profiles on the dolls)

yall is some ugly ass dollz

It surprises me how people fail to note that 5/10 of these dolls are labeled "Caucasian American," that none are biracial (or at least labeled that way. Even the light-skinned, curly-haired, tan-skinned doll is labeled "African American" on the site.) All dolls are labeled "-American," but what about friends from different countries, who may not fall into neat racial or citizenship-based categories?

Clicking around the site reveals that there some collections which only feature the blonde Caucasian dolls, who are also featured in almost every advertisement. Some collections, such as those that are princess-themed and music-themed, only feature the Caucasian dolls. The princess, mermaid, ballerina, fairy, wedding, veterinarian, swimwear, and rockstar theme outfits are all made for and modeled by the blonde Caucasian doll... while non-Caucasian dolls remain cute ethnic side-characters who are not shown wearing any of these outfits. The rockstar one is especially ironic, given that rock music was first created by African Americans...

Maybe it's because of the market these dolls are targeting: well-to-do Caucasians who want to feel that they are promoting racial tolerance. However, these dolls might not be the best way to do that: the way these dolls are labeled also buys into common Caucasian-American prejudices against minorities. For one, the idea that people are only one race or the other, and that "mixing" doesn't exist. And the fact that people need to conform to suburban middle-class values in order to be accepted (are the African American dolls listening to hip hop? No way! But the Caucasian dolls listen to rock music...) Then there are the ethnic prejudices: the "Hispanic American" likes nothing else except cooking for others, the Asian American doll is "shy" yet "accomplished" in competitive sports like ice-skating, and the African American is "modest" but artistic (she makes fashions for her friends.) Why modest? Because anything else would be holding a "unearned entitlement," according to one reviewer on the Testimonials page.

The non-Caucasian dolls are always portrayed as good for being modest, serving others, and for "teamwork," but are not shown as leaders or visionaries--- that's left for the Caucasian dolls (the book of the founding of the Only Hearts Club is all about a blonde Caucasian doll.)

Alternative to Barbie? I don't think so.

bratz i love bratz can you send this bratz to

Can kids actually buy these dolls???

It is impossible to connect with this company (Only Hearts Club) either by phone or by email. Customer service is definitely not on their radar.

Sadly I can say I addressed the possibility of having a new girl join the club with a chubbier body. I also asked about a few boys with manners, feelings and morals. I was told by the company rep IN NO UNCERTAIN terms the company had zero plans to introduce ANY males! In addition the dolls were to represent a healthy lifestyle, NOT whith some fatty pathetic doll. Well alrighty then! I truly adore these dolls with their realistic DIFFERENT faces and noses, wonderful hair and clean modest styles. The garment are very well made and cute. A pocket is really a pocket, imagine! They have underwear! They do not look like Street Walkers or the "ladies" strolling downtown. Tragically, in 2015, in spite of awards, rave reviews by educators and a solid, quality product, they have ceased production. Well I will continue to snap them up, along with outfits, little sisters and all. Just because Mighty Mattel has set a path to lower and yet lower quality, class and realism doesn't mean you have to accept that! Mattel has managed to get rid of ALL competition thus far, and YOU have allowed it! Their dolls are super nasty! Ken is more feminine than Midge. The accessories, furniture, clothing is bottom basement cheap junk. Bratz look like Insects, give me a break! I really wonder if they're deliberately seeking destruction. I wouldn't allow my daughter to have them in the 1980's!!! Then they rolled over Hasbros lovely Maxie doll. Stop taking whatever is doping you. Are you not WOMEN? Quit eating the hay , alfalfa and pellets. Are you not MOTHERS? Don't follow the bleating crowds of imbeciles! Are you not CONSUMERS? Do you not work for your money, try to teach your child not to dress like Barbie, pinch each dime you get? Toys cost money! Wake up. Demand better. Expect more. Decline the rush to buy the silence of your kid by getting in that line to pay way too much for way too little, too tight, too short and with junky fabric! Women, Mothers, Sisters of the World...unite and insist on better for your family! Barbie/Ken clothes from the 1960's-70's look, fit and last longer than anything from 1995 on. Make it stop. Stop it now. Next they'll be making you think your girls are just playing happy family with those Bratz. R I g h t. Grow up. Or at least get real with yourself. You're welcome, dogsRbetter.oo