The Truth about Infected Cigars: Faith in Science

In case you thought the craze for sanitary or anti-bacterial products was new, here’s a Cremo cigar ad from the 1920s (found at the Microfilm Gallery) that scares consumers with the specter of cigars covered in “mites of malice”: 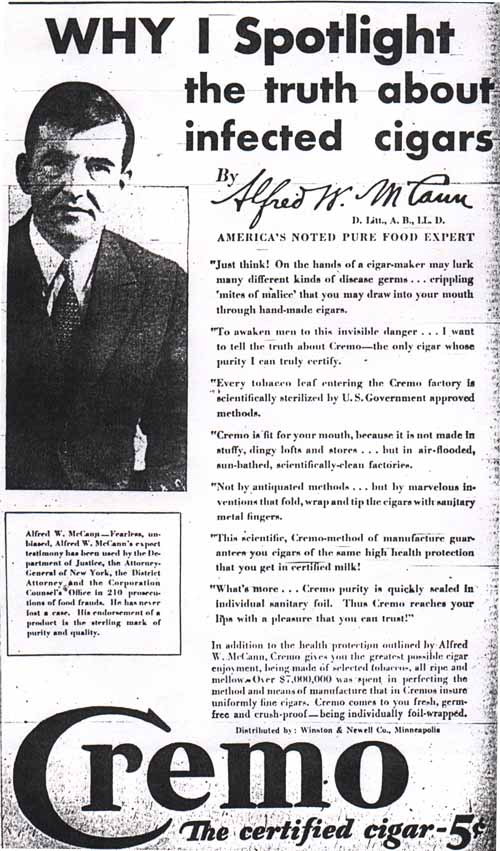 Just think! On the hands of a cigar-maker may lurk many different kinds of disease germs…crippling ‘mites of malice’ that you may draw into your mouth through hand-made cigars. To awaken men to this invisible danger…I want to tell the truth about Cremo–the only cigar whose purity I can truly certify. Every tobacco leaf entering the Cremo factory is scientifically sterilized by U.S. Government approved methods. Cremo is fit for you mouth, because it is not made in stuffy, dingy lofts and stores…but in air-flooded, sun-bathed, scientifically-clean factories. Not by antiquated methods…but by marvelous inventions that fold, wrap, and tip the cigars with sanitary metal fingers. This scientific, Cremo-method of manufacture guarantees you cigars of the same high health protection that you get in certified milk! What’s more…Cremo purity is quickly sealed in individual sanitary foil. Thus Cremo reaches your lips with a pleasure that you can trust!

What I like here is the total faith in technology and mass production. It’s safer! It’s innovative! It’s sanitary! It’s a striking contrast to the concerns often expressed about scientific innovations and their possible negative effects. It would also be a good example for talking about the way that perceptions of manufacturing methods have changed. In the 1920s, the idea of mass-produced cigars was exciting and modern. The fact that they were made with “metal fingers” was a selling point. Today, on the other hand, the techniques referred to in this ad as “antiquated” might be called “artisanal,” a word that connotes craftsmanship and quality. According to About.com,

The novice smoker may be tempted to start by trying those machine made brands sold in Drug Stores, such as Dutch Masters or El Producto. However, the aspiring connoisseur should consider spending a few more pennies and moving up to hand rolled cigars, which are sold online or at a local tobacconist.

We have friends who are farmers and they make and sell soap. It's great stuff.

One thing I didn't quite understand, why would someone care if the cigar was made in sanitary conditions? In the end if you are a cigar smoker than its going to get you ill whether it was made clean or not. I smoke cigars anyway and I sure love them. I usually get my cigars from http://www.gocubans.com/ for a good price, and I'm very sure they are sanitary.