Breck C. sent in this story in the Wall Street Journal about a study showing a link between geography and personality– that is, that different personality traits are dominant in different regions of the U.S. Personality traits were measured by answers to the Big Five Personality Test, which is widely used in psychology and other fields to determine a person’s dominant personality traits. The story was accompanied by maps showing where five traits (extraversion, agreeableness, conscientiousness, neuroticism, and openness) are dominant. According to the study, many stereotypes, such as the neurotic East Coaster, have a basis in reality.

Here is a screenshot of the map of conscientiousness: 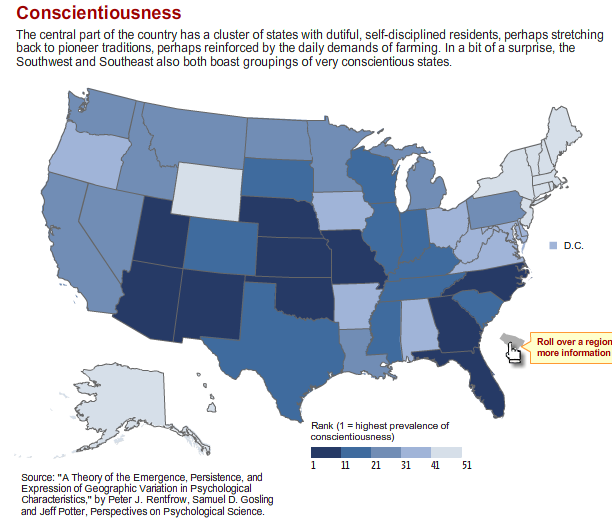 Leaving aside any questions about personality questionnaires, and whether people are very accurate at reporting their own personality traits, what I found interesting here is the explanation of this pattern in the caption above the map (which I’m assuming was written by someone at the WSJ and didn’t come from the study): perhaps the Great Plains region is conscientious because of “pioneer traditions” reinforced by “the daily demands of farming.” On the other hand, it’s “surprising” that people in the Southwest and Southeast would be conscientious.

This is a great example of a non-scientific explanation of data that relies more on stereotypes and assumptions than anything else. Why would pioneer traditions be any stronger in Kansas and Missouri than in Oregon or Montana (or a number of other states) that were also settled by “pioneers” (however you want to define that term)? I’m unclear whether the reference to farming is meant to describe the past or the present, but either way, it’s suspect. Lots of other states (including those surprisingly conscientious states in the Southwest and Southeast and many of the less conscientious states) have farming traditions, as well as important agricultural sectors today (like, say, Iowa and its corn). The vast majority of people in those conscientious states aren’t engaged in agriculture today. And for that matter, why would the “demands of farming” lead to conscientiousness in a way that other types of work wouldn’t? These seems to play on stereotypes of farmers (and rural folk more generally) as hard-working, honest, salt-of-the-earth types, compared to superficial, rude (but hipper) city dwellers.

It’s the type of unsophisticated, stereotypical interpretation of academic studies that I often see in the media, and I think this particular explanation of why these states would be conscientious is just silly.

Thanks for the link, Breck!

I have to wonder why it is surprising to the WSJ that the Southeast rates as conscientious. Is there a new stereotype I haven't heard about? I've always felt people in the Southeast think of themselves as very conscientious. But perhaps people outside of the region think of us in a different way.

Weren't all states in the union settled by pioneers? As you say, a rather silly way to interpret these things. Interesting, but silly.

There was a recent "Bad Science" column in the Guardian about a similar study in the UK that the papers made a big deal about. The catch ? The study itself said the results weren't statistically significant.

How much are we going to bet there's something similar at wok here ?

That observation seems particularly ironic, considering the associated article actually warns of just such a risk:

"The personality maps may reinforce stereotypes and tempt us to draw overly simplistic conclusions, said Toni Schmader, a psychologist at the University of Arizona. Knowing Arizona ranks low in neuroticism, Ms. Schmader said, she might conclude that sunny weather makes for sunny dispositions. But if the data had turned out the other way, the sun could just as easily be blamed for high neuroticism -- for driving Arizonans stir crazy by keeping them cooped up in air conditioning."

I'd like to note that the graphic depicts "rank" instead of any meaningful measure like the percentage of respondents that chose conscientiousness as an important quality. The difference between states may be big or so small as to be inside the range of standard deviation, we have no way to know... except by looking at the paper's result tables, if there are any.

I've got a PDF copy of the report, but I don't know statistics well enough to understand it.

The report has 7 tables, the largest being a comprehensive list of each state's rank and "z-score" if that will help.

Otherwise, a footnote states "Raw means and standard deviations for each state and factor are available
on request."
Contact info is on the lead researcher's home page.

Oh, and if it weren't obvious from the above comment, I can send you a copy of the file if you wanted to take a more in-depth look at the research.

Looking at the Wall Street article I get a kick out of how ambiguous these measures and theories are, so that even when you get the complete opposite effects of what you would expect, as in "extroversion," they're still able to come up with a viable explanation of why this is the case--and more importantly, how their operationalizations are 100% valid.

This sentiment is magnified by the fact that I figured this was going to be the case before I even leafed through the column.