In my post a few weeks back about stuff kids bring to college, I had a photo of a teddy bear lying atop a pile of belongings that included pink bed linens. Obviously, it belonged to a girl. (There was a purse in the picture, but even without it. . . .)

A couple of days later, Lisa at Sociological Images had a post reminding us that pink was once the color for boys. She linked to an article by Ben Goldacre in the Guardian.

The Sunday Sentinel in 1914 told American mothers: “If you like the colour note on the little one’s garments, use pink for the boy and blue for the girl, if you are a follower of convention.”

Goldacre uses this bit of history to debunk the claim recently made by evolutionary psychologists that girls’ preference for pink was an outcome of evolution.

But what about the teddy bear? Isn’t there something feminine, a maternal instinct perhaps, that leads girls to keep these soft, childhood objects? It is only girls, right?

Wait, now I remember seeing NYC sanitation trucks with a teddy bear mounted on the grill like a bowsprit mermaid. And Sebastian Flyte in Brideshead Revisited who takes his bear Aloysius with him to Oxford.

Now there’s a DVD* about a Teddy bear snapshot exhibition by Canadian Ydessa Hendeles – thousands of photos from the early twentieth century of people posing with their bears. And it’s not just girls. 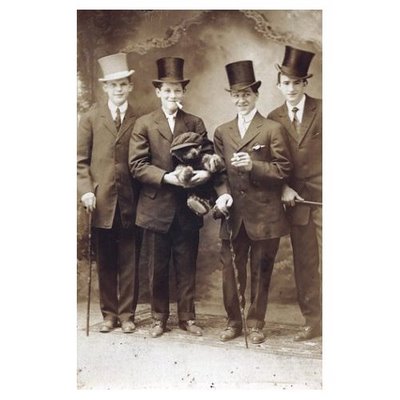 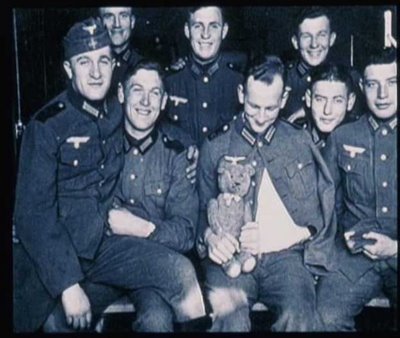 *The DVD is of a documentary film by Agnès Varda, who interviews the visitors to the exhibit.

It might be different regarding teddy bears in the UK. I have met many men that have kept hold of their childhood teddy bears.
My little brother still keeps hold of his "Pyjama Ted" and he is 24. My boyfriend has a threadbear panda that has no stuffing yet is still a prize possession.

Is keeping hold of a childhood possession seen as "unmasculine" in the USA?

In many cultures in the US it is only OK for men to show aggression. At the age of 10 I brought a stuffed animal to camp and quickly learned this was not a socially acceptable thing to do. Sentimentality, remorse and sensitivity are the things of chick-flicks. Attachment to childhood is to be forsaken as quickly as possible for males, while it is nurtured in females. The teddy bear backpacks in Clueless are a dated example of this. Being daddy's girl is fine, being mamma's boy is taboo. Males must be independent and looking towards the future, not dwelling on the glory days of apron strings.

I have nothing insightful to add, I just want to say that the last two pictures made my day!

I am extremely late in the game but: My dad is in his late 40s and collects teddy bears. I live in the US and nobody has given him any flak about keeping teddy bears.

Thanks for the hat tip! And long live the bears - let's free them in the wilderness...

The name "Teddy bear," as far as I can recall, came from Theodore (Teddy) Roosevelt, who was neither a woman nor a girl.