This, dear reader, is a pound of Kopi Luwak Arabica coffee, for sale here: 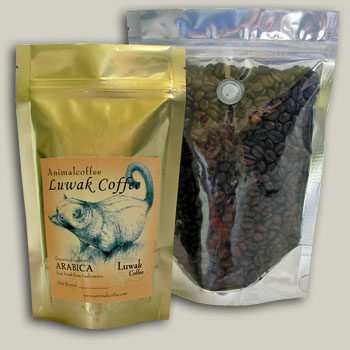 Now, you may be wondering, is it worth it? Should I spend so much for coffee? Luwakcoffee.com believes that it is:

Yes, the coffee is expensive, but so are all of the better things in life. You have to pay more for quality or uniqueness. This is a class issue: part of what you are paying for is exclusiveness, the knowledge that not everyone can afford a Chanel bag or Christian Louboutin shoes or Kopi Luwak coffee. Its inaccessibility to the masses is part of how you know it is worth having. And from this perspective, Kopi Luwak is quite desirable: at most 1,000 pounds or so make it to market each year, which makes it so expensive. It’s so desirable, it was included in the 2006 Emmy Awards gift bags for celebrities!

Now, at this point an ignorant but aspiring gourmand might ask, “What, pray tell, is so special about Kopi Luwak coffee? What is this ‘unusual phenomenon’? I’m so anxious to know!”

Why, my dear, the beans for your coffee were eaten by a civet and then handpicked out of its crap to be brewed into coffee for you! It’s terribly adventurous, isn’t it? 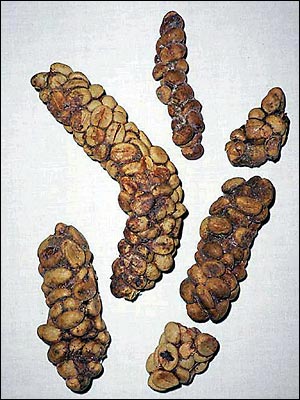 Delicious! If you’d prefer to buy it in this form (called “natural” coffee), you can buy it that way too. [For the record: I will never be able to eat a Payday candy bar again.]

In researching this topic for you, Reader, I found many properties ascribed to Kopi Luwak coffee. It is supposedly lower in caffeine than regular coffee because the civet’s stomach acids digest some of the caffeine. Or something. It’s supposedly less bitter and has less of some protein or other, and that’s why it tastes so much better. One researcher said it is “earthy, musty, syrupy, smooth and rich with jungle and chocolate undertones,” although I question how much better it can taste since “[though] certified blinded human tasters could find little difference in the overall flavour and aroma of the beans, an electronic nose machine could detect that the aroma of the civet coffee beans is also affected.” I’m glad a machine thinks they smell fantastic.

Why did I decide to post this on Soc Images? Well, one, the pure absurdity of it. However, there are some sociologically useful things you could use it for. One might be to discuss food and our cultural taboos on food. My guess is if you had students make lists of things they’d never, ever eat, no matter what, and then made them slowly pare them down based on the assumption that they were starving, people might give in and say, “Ok, I’d eat a slug,” but few people would say “Fine, I’d eat poop if I had to.” I could be wrong, but I think most people would see eating another animal’s fecal matter as beyond disgusting. And yet here we have an example of people doing it under no duress (that I can see) and considering it a delicacy.

I suspect that students would then express horror and shock at the idea of drinking such coffee, but you might then point out that many of them probably eat the product of an animal’s digestive tract somewhat regularly: honey. Bees digest pollen to turn it into honey. It could lead to a nice discussion of how we come to think of foods as normal or disgusting, and why we might continue to eat honey and think it’s just fine, since we’re used to it, but think people who eat beans picked out of civet poop are gross.

Of course, you could also use it as an example of how, if it is sufficiently expensive and difficult to find, anything can be labeled a delicacy and sold to upper-middle-class yuppies. Even wild cat* crap.

*Not really a cat, though it’s called the civet cat.

Thanks, this was awesome! Hilarious, astounding absurdity.

This was a nice touch too: "certified blinded human tasters could find little difference in the overall flavour and aroma of the beans." I wonder how much cost is added to the production of this "shitty" coffee by the difficulty of procuring human tasters who've been certifiably blinded? Perhaps these poor souls are another illegal export of the Taliban?

Did you just come out from under a rock? Who hasn't heard about this gag-novelty garbage? Articles on digg have been posted almost weekly for the past three years.

Get with the program...

Well, given how much time I've spent grading lately, yes, you could say I've been living under a rock lately. That said...

I didn't just hear about this, I just got around to posting about it. And people like us may think it's a "gag" or novelty gift, b/c the idea of it being a serious product seems insane, but it in fact was originally targeted to, and is still mostly limited to, people who think of themselves as coffee gourmands. I certainly found a couple of sites playing on the novelty element (showing a civet cat pooping into a coffee cup, for instance), but there are many "serious" gourmet-type magazines, websites, etc., that talk about it in a very, very different way, as did the researcher at the University of Guelph.

Oh, macon d--I think the "certified blinded" thing means "blinded" in a scientific way, meaning they certified the tasters didn't know which coffee was which when they tested them, to avoid bias, in the same way medical studies are often called "double-blind."

On the subject of foods who have squicky provenances, eggs come from a hen's cloaca, foie gras is a force-fed goose's diseased liver, caviar is salted raw sturgeon's eggs, blue cheeses like roquefort are moldy, and so on. And that's just normal Western cuisine, if you go for foreign delicacies you can find anything from huitlacoche (corn smut eaten in Mexico) to casu marzu (a Sardinian rotten cheese with live maggots), balut (a duck egg with a fully-formed embryo inside it eaten in Vietnam and Cambodia) and so on.

Personally, I think that the only thing that tops kopi luwak coffee in terms of both squickiness and poshness is ortolan, a thankfully very rare French speciality.

Thanks Gwen, I figured as much. I should've added an "end snark" tag at the end of my comment. And if makes you feel any better, your post was my first alert to this fine cup of merde.

but you might then point out that many of them probably eat the product of an animal’s digestive tract somewhat regularly: honey. Bees digest pollen to turn it into honey.
To quote Futurama:
Slurm Queen: "Honey comes from a bee's behind, milk comes from a cow's behind, and have you ever used toothpaste?"
Fry: "Whose behind does that come from?"
Slurm Queen: "You don't want to know!"

I can see the attacks coming at me already, but how do they get the civet to eat the coffee beans? If it naturally eats them then fine, but if there's a demand for this product, I'm hastened to believe that somewhere out there wild cats (civets) are being force-fed coffee beans just so rich people can eat their bean-poop.

If this is the case, this is more than disgusting. One could use this argument when discussing oppression and how that stems to humans oppressing animals. Or how humans use animals for profit, and believe that animals serve no other purpose than for our own needs and demands.

Civets naturally (or at least voluntarily) feed on coffee beans. They used to collect the beans from the wild, but now there are at least a couple of farms where they keep them and feed them to make collection easier.

Those are great points about human/animal interactions. In a very, very small way, the farming of civets is an example of how intensive agricultural production emerges (such as cattle feedlots and pork and poultry confinement operations) to make production quicker and more efficient (in the short-term, any way).

Imagine that! The best coffee in the world is from civet crap. As I mention in my blog, this is only edible because the inner bean of the berry is not even digested. But still, can you imagine telling your friends that you drank coffee from civet crap?

I heard a feature story on the radio once about foods that make Americans squirm. Civet coffee came in for a lot of attention. I understand that conterfeit beans are a huge problem--just as far more "Darjeeling" tea is sold than is produced in the Darjeeling region, many "Kopi Luwak" beans on offer have never, in point of fact, taken the scenic trip through a civet. The demand for coffee beans picked out of a civet's poop is just that great.

Who knows? Perhaps it is the most wonderful coffee in the world, and I'm depriving myself of a great pleasure.

I've ever tried Civet Coffee.
It's very nice and pure.
But I just surprised that it's very expensive.

Hi, If you want to know all about Kopi Luwak or want to try it, please visit: http://www.realkopiluwak.com There you can find a description of the Luwak animal, the process to obtain the Kopi Luwak, How to make a perfect cup of coffe, warnings about buying kopi luwak, description of this rare coffee, pics and video. You can also buy kopi luwak online. Thanks

Great post Gwen,
This coffee always calls to mind that great scene in Fight club where they hop the fence at the liposuction clinic to collect the fat vacuumed out of the rich and elite only to render it down and sell it back to them as overpriced soap.
There is delicious irony in the notion of those idiots who believe exclusivity by way of mere price somehow conveys class or value....while the smubly sip on this overpriced hum-drum coffee that has passed through the ass end of a civet.
One cannot help but wonder how broadly the Sumatrans smile as they collect "cat" crap from the forest floor to sell it to the crazy Japanese and Americans.

[...] other great examples, see these posts on soup for breakfast, spam, poop coffee, the rise and fall of aspic, and prunes (they’re for [...]