From AdGoodness come these three print ads for a new digital camera, the Nikon S60, which apparently has a feature that allows it to auto-detect and focus on faces. The three examples include a bunch of people rubber-necking at two young “porn lesbians” [the top one of which has a horribly Photoshopped head!], a bunch of people of color sneaking up on a white safari dude, and a bunch of ghosts looking at a woman in a hotel room.  Of all the possible examples that could be used to highlight this face-finding feature, who thought it was a good idea to use some hackneyed stereotypes about sexual orientation and race? 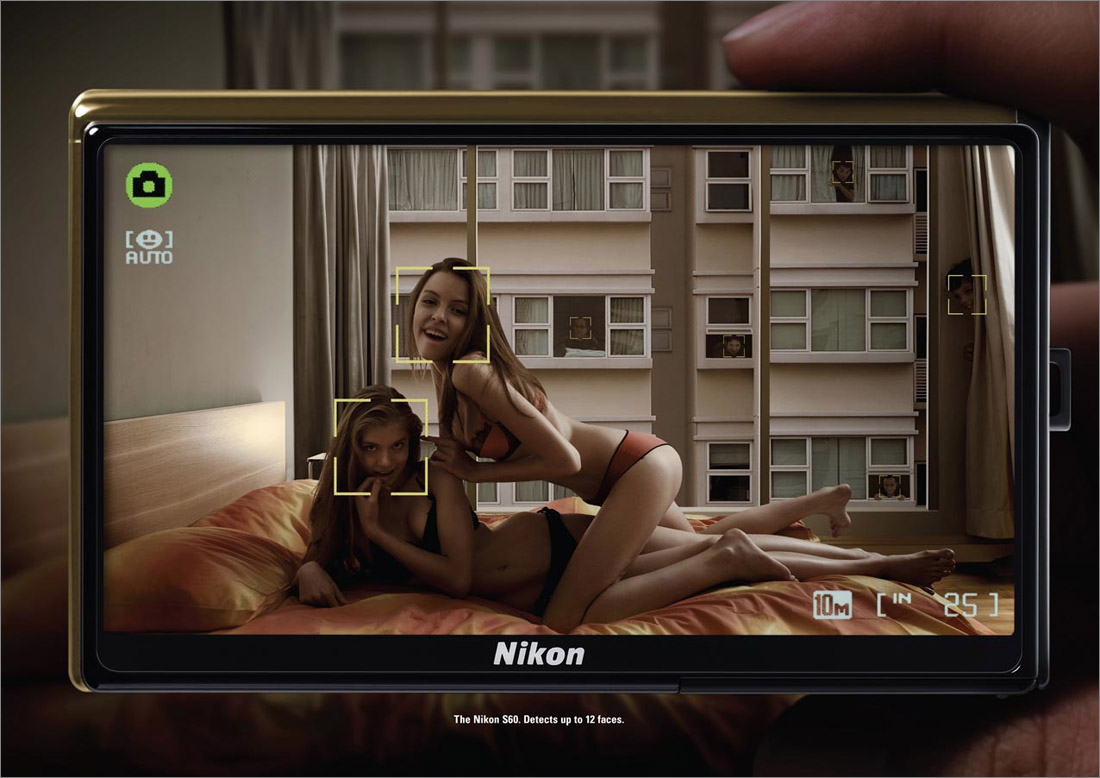 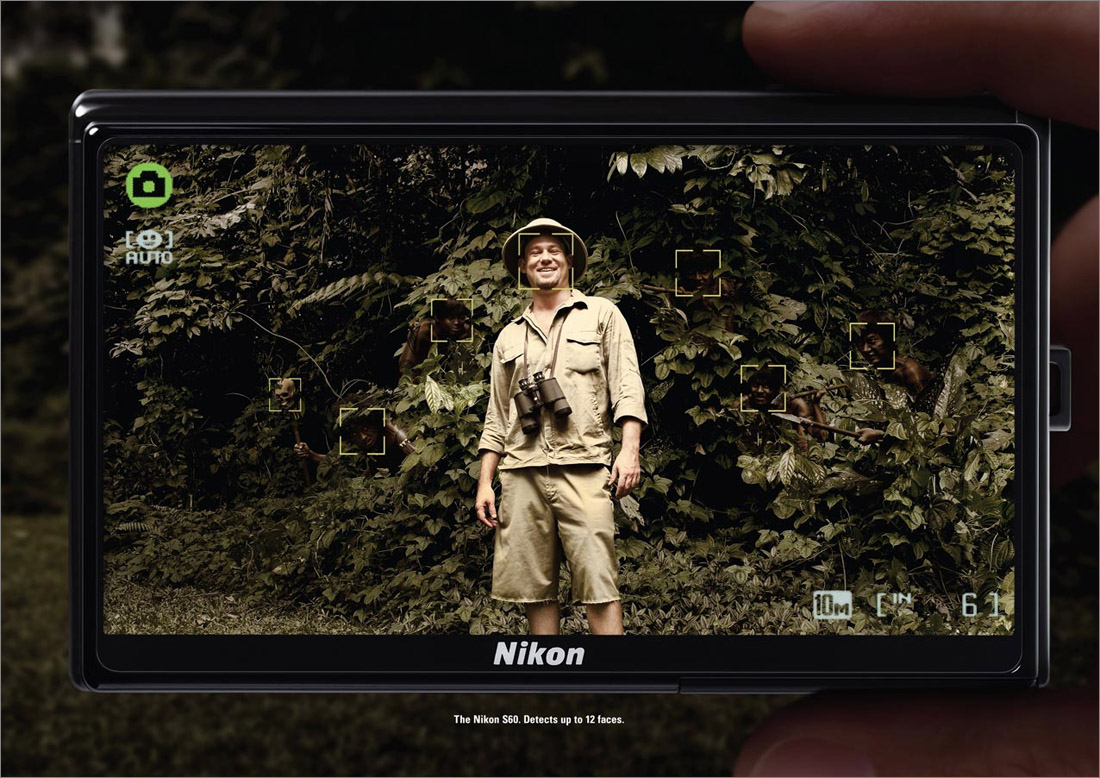 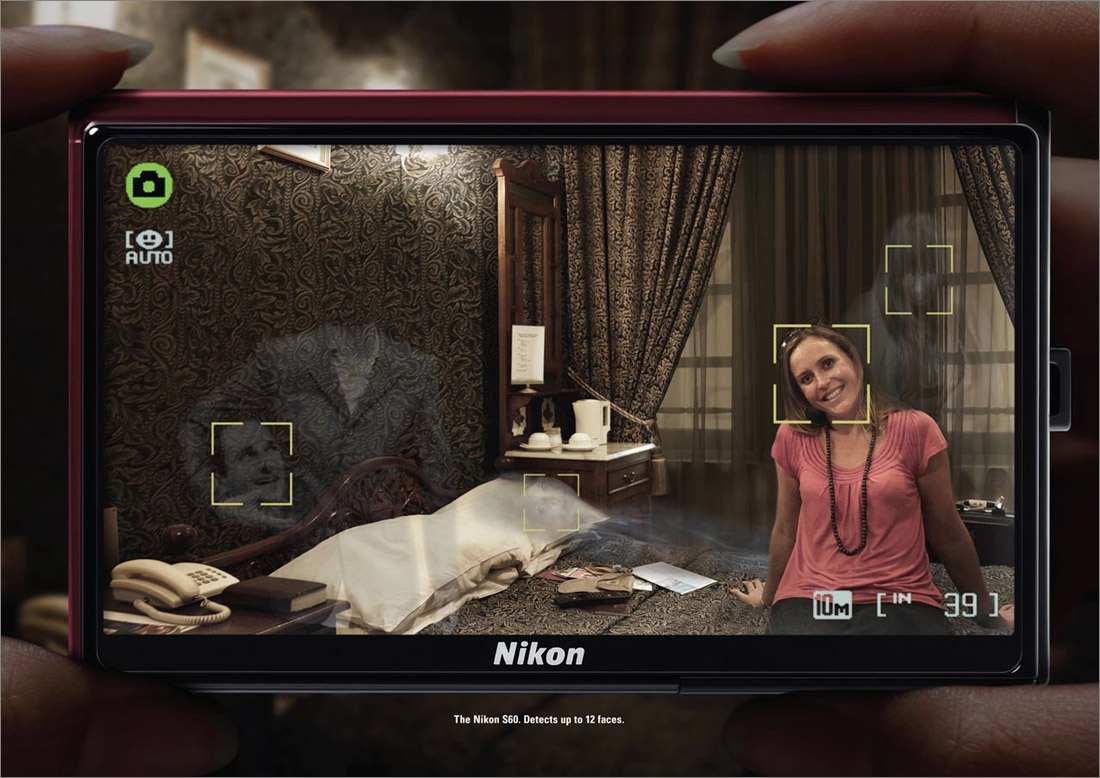 That last one is scary. Why would anyone want to advertise their product by insinuating that it will show you dead people? Reminds me of the ad campaign that showed actual people as if they looked like they did in photographs, such as the red-eye baby or the oversized-head dog... Olympus, it was.

Not defending the ads, again, but just observing that they are gross in a much more devious way.

these are definitely strange. sometimes i wonder about what went on in the meetings that led up to ads, and how the decisions were made to go forward with them.

i just found your site via Savage Minds. it's really interesting what you are doing here...keep up the great work.

"Not defending the ads, again, but just observing that they are gross in a much more devious way."

you have a good point.

Those girls look seriously underage. It also makes my wonder when and how we got to the point that the bodies they have would be immediately recognizable by a viewer of this ad as representing 'sexiness' -- they are *extremely* thin.

The second ad could have been made non-offensive by using animal faces in the bushes, but obviously a choice was made by the advertiser to instead reinscribe colonial/racist visual discourse.

The second ad could have been made non-offensive by using animal faces in the bushes, but obviously a choice was made by the advertiser to instead reinscribe colonial/racist visual discourse.

I don't know if that particular example works with the technology, but the point stands. The face finder could pick up people paintballing in camo if they wanted the "sneaky" look, for example ("haha, the guy's about to get toasted from behind by his buddys while he poses for the shot" kind of thing.)

Interesting. I wonder if the technology was adapted from military applications, like spotting hidden snipers. That'd be handy in places where those kinds of things are an issue.

The ads seem like a sly way of marketing the feature as something more than a way to get the sharpest focus on the faces of people we want to photograph since the primary subjects in the ads don't exactly need some new tech feature to help the photographer find their faces, and if they are near the center of the shot most cameras would auto-focus on the faces anyway.

Correction: I would've been more annoyed than freaked out about the face in the room since it was just pointed out to me that it looks like a kid, which I'd agree it does after I looked at the full-size version.

"Son, what did I tell you about bothering daddy when he's working?"

Damn feminists trying to be all political like. Get to the kitchen. Problem solved.