I just discovered the entirely excellent website Asian Nation, run by C.N. Le and full of great information about the Asian American community. Here are some tables showing what percent of various Asian American groups are married to spouses of the same or other groups, updated as of October 2007 using Census data (an explanation of the three columns follows): 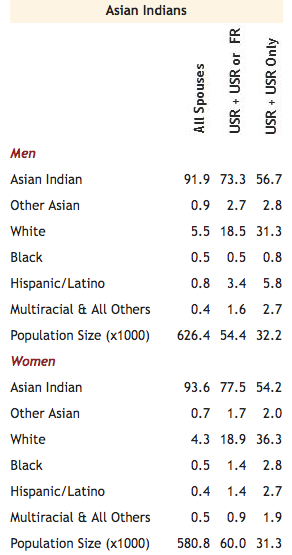 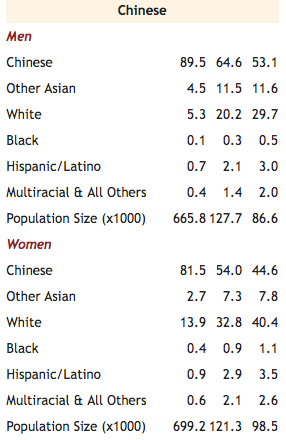 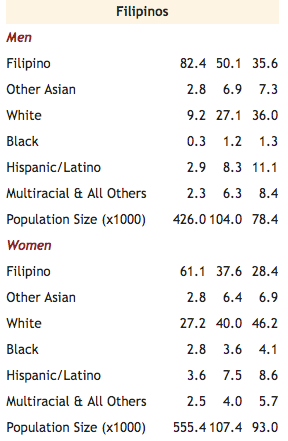 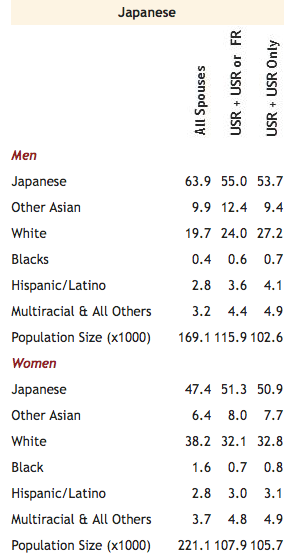 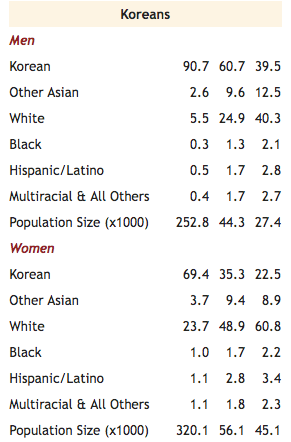 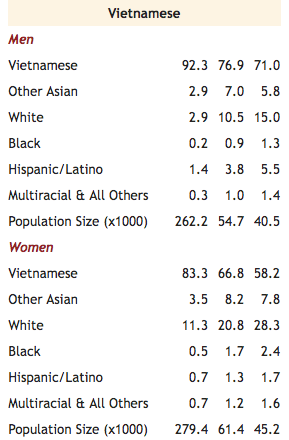 Ok, now to explain the three columns of numbers. The first one presents data for all marriages that include at least one Asian American spouse–this will include large numbers of immigrants who were married before they moved to the U.S. The second column includes only those marriages where at least one spouse was raised in the U.S., defined as either born here or moved here by age 13. The third column includes only those marriages where both spouses were raised in the U.S. According to Le, this group represents less than 25% of all marriages including an Asian partner, but “…has the advantage of including only those who were raised and socialized within American society and its racial dynamics. It is this U.S.-raised population that best represents young Asian Americans, since they are the ones who have the most exposure to prevailing American cultural images and media.”

Not surprisingly, endogamous (in-group) marriage rates drop off significantly among U.S.-raised Asian Americans. There are other interesting gender patterns as well. Notice, for instance, that Chinese, Vietnamese, Korean, and Filipina women are quite a bit more likely to be married to a White partner (the most common out-group spouses) than are men, and for the remaining groups, women are slightly more likely to be married to a White spouse. You might discuss the social and historical factors that might cause that pattern, and compare it to the trend in marriages with a Black and a White spouse, in which the gender pattern is usually reversed–Black men are more likely to be married to Whites than are Black women. It might also be worth noting that Korean and Filipina women are significantly less likely to marry endogamously than the other Asian American ethnic groups.

I was perplexed by the Vietnamese numbers - who do all those US born Vietnamese men marry, exactly, with such a huge discrepancy in the numbers of endogenous marriages between men and women, assuming near-parity in their percentage of the population?

Hmmm... http://www.navasa.org/html_stats/Marital_Status.htm
It would seem you're right (although the table doesn't make the distinction between US-born or not) - Vietnamese men are far more likely not to marry at all than women. That in itself is interesting, though I'm not sure why.

Couldn't you just as well have said "It seems that women tend to prefer to be the submissive partner in relationships..." or don't you criticize women?

Let me guess. The RACISM of men trumps their desire to DOMINATE women? LOL

The most staggering statistic in that whole table is the fact that 60% of Korean - American (american raised) marry a white partner and only 22% marry their own. How crazy is that.

[...] homogeneity may play a factor too, since interracial marriage is still uncommon and asymmetrical when it does occur.  Some counties have more disproportionate ratios of males and females, which may also [...]