Alcohol as a Tool in the Dating Game

I’ve never been able to find a picture of it, but when I was in graduate school (not so long ago) and living in Madison, Wisconsin, there was an ad for Bacardi on the side of a city bus that said: “Bacardi, the Ultimate Wingman.”  A wingman is a friend who helps you get laid, so the not-so-subtle message of the ad was: “get’er drunk and she’ll do ya!”

Here are two ads that have, essentially, the same message (the first was given to me by my student, Bo; the second was found here). 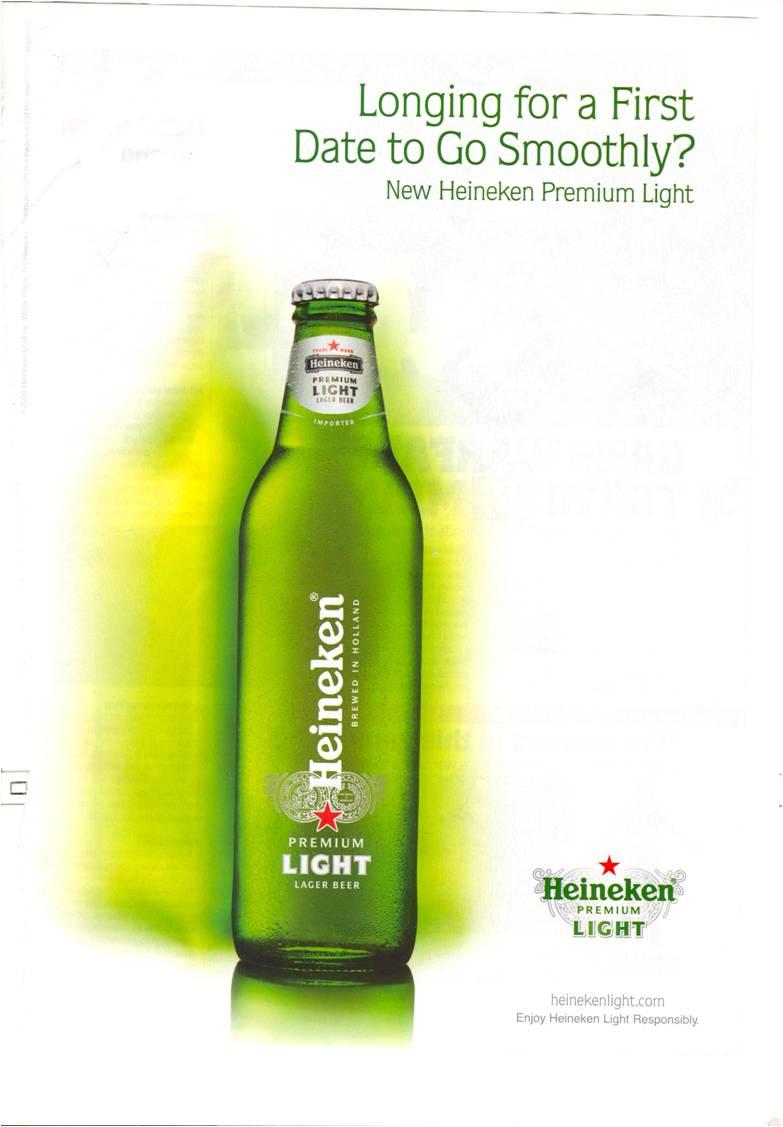 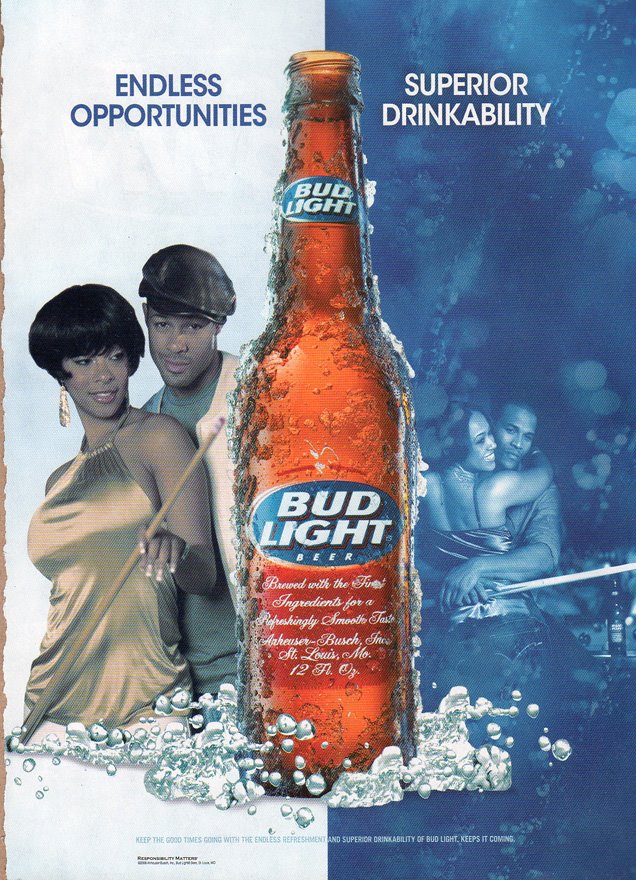 See also this ad for, ostensibly, a date rape drug.

An anonymous commenter pointed us to billboard below advertising Southern Comfort as a “liquid panty remover.”  Before we get our panties in a bunch, I should point out it’s a hoax (thanks, Vidya): 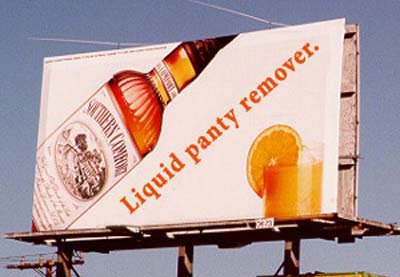 So this is a hoax.  It still trivializes trying to manipulate women by getting them drunk (at best) and date rape (at worst), but it could have been produced by any yahoo with a computer.  Yahoos with computers can do anything they like, I’d be more concerned if it was circulated by the company that markets Southern Comfort.

That said, in looking it up to discover it was a hoax, I discovered about a dozen recipes for mixed drinks called “Liquid Panty Remover.”  Here are some screen shots: 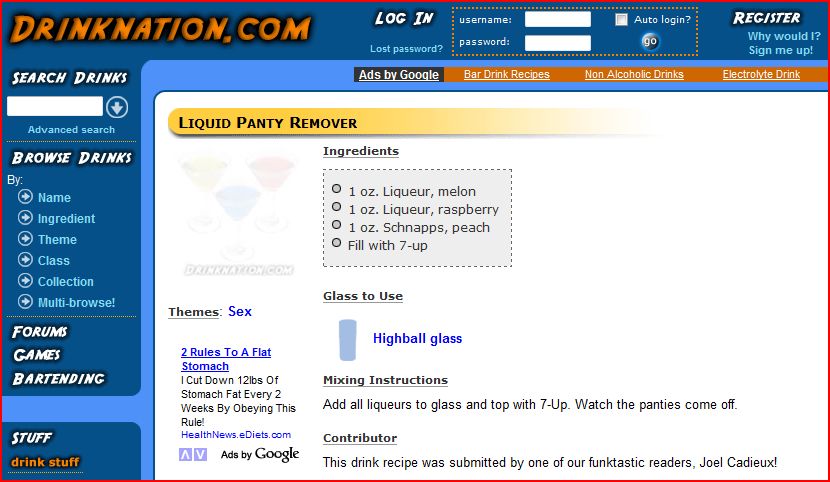 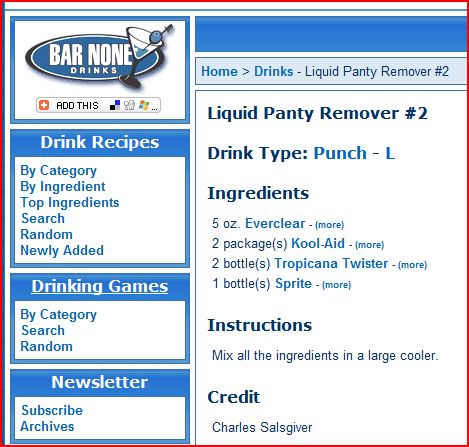 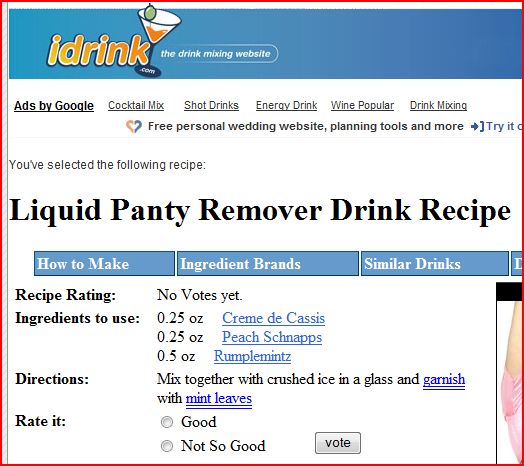 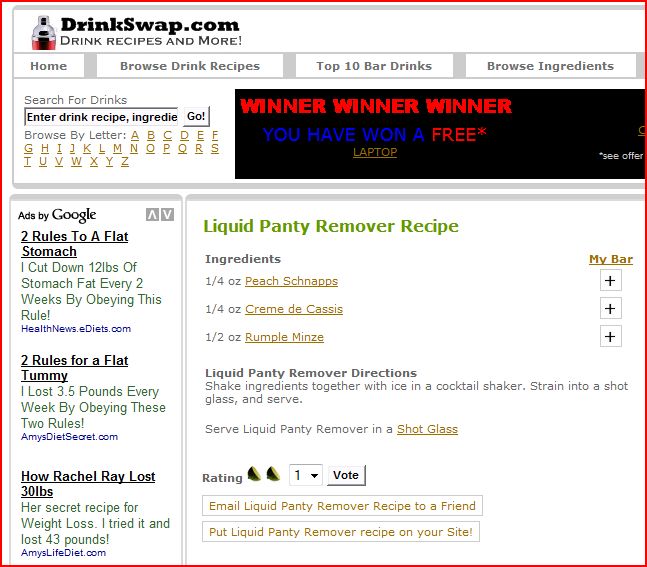 So I guess there was good news and bad news.

NEW! In this ad, sent in by HighJive of MultiCultClassics, the brandy is the “producer.”  The producer is the person who makes a film happen.  Thus the sexy scene that is about to ensue is attributed to the alcohol.  (Also notice the linking of the product with pornography.) 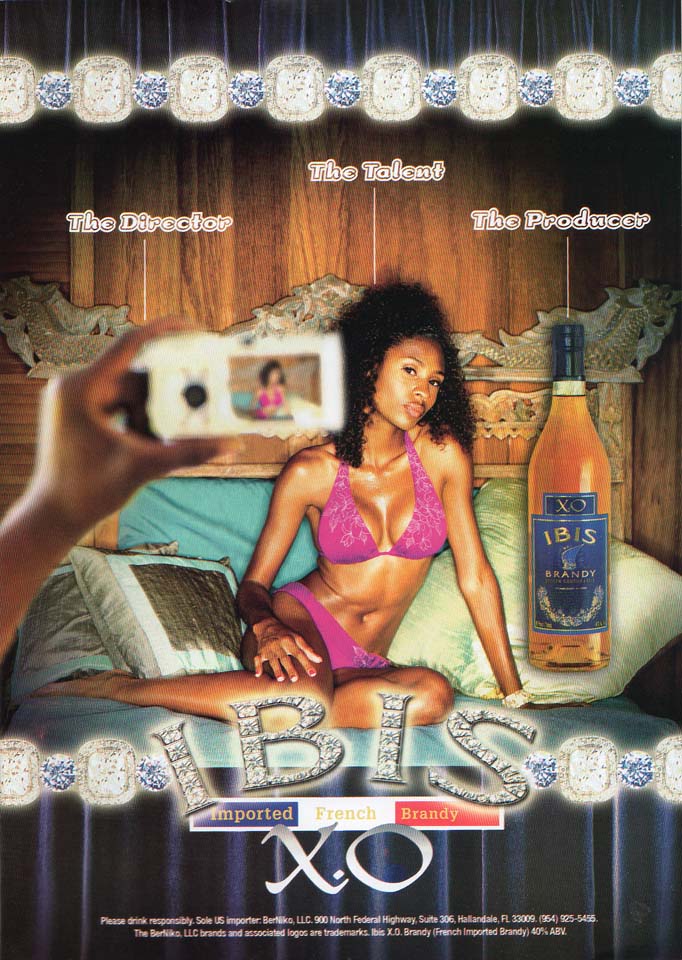 Nice phallic bottles, there. There's really no way you -- or, at least, your subconscious -- can miss the message.

drink a heineken. get drunk. that way, you'll have the courage to talk her into something...

drink a bud light and offer her one, too. there will be "endless opportunities" after closing time if you're both drink.

I agree with your reading of these adverts, but also think it's worth noting what the original intention might've been as part of the discussion. Both the beers are 'light' versions, so it might be saying that you can enjoy a (their) beer and still be sober/level-headed/self controlled enough for things to 'go smoothly'?

I don't know... the second ad is more overt in its sexual content.
but the first, it looks bright and clean. without even much sensual appeal.

the first thing that came to my mind wasn't "make her drunk and she'll do ya" but more aimed at the female public emphasizing the fact that it's light beer, something that, i guess, wouldn't get you drunk (sober enough for things to go smoothly, as Charli says) without making you look a nerd for not drinking alcool...

about the bottles being phallic... well... it seems a little too far fetched. these aren't much any phallic-er (eheh) than "normal" bottles. on this ground even bottled water would look like a rape drug...

[...] images has an overview of troubling advertisements here. Follow the links at the bottom for more examples, including this one. [...]

I guess my question is: Is it enough that they easily can be interpreted as promoting date rape? (A possibility that I am rather sure that the marketers were well aware of.)

I'm a college student, and my first reaction to these ads is that I relate. I go to a small liberal arts school, filled with very intelligent and AWKWARD students. There is absolutely no dating scene, people either hook-up or are in steady relationships, many of which begin with a hook-up. It gets to the point where if I like a guy, my first thought is "how can I be drinking near him?" There are obviously many negate connotations to this view of relationships - but it is also a very resonant one.
I'm not sure if these ads are really targeting men in particular. The first, as Marcello notes, is pretty asexual, and in the second BOTH seem to have a conspiratorial look. These ads are definitely condoning a certain outlook on dating, which I would say based on experience is a negative one, but not necessarily a dangerous one.

I do think you make a good point though, lisa. If someone can interperate the ad as condoning date rape, it really doesn't matter the intentions.

While I can definitely see your interpretation of both ads, my first impression of the Heineken ad was something more along the lines of "Longing for a beer that goes down smoothly?" Like you'd be "dating" the beer, and it has a smooth taste. Granted, the idea of it being a "first date" doesn't make much sense in that context, but it's still a different take on it.

I’m not sure if these ads are really targeting men in particular. The first, as Marcello notes, is pretty asexual, and in the second BOTH seem to have a conspiratorial look.

In the second one I'd say *he* is conspiring with the target audience, while she is conspiring... with the pool cue? Do they drink beer too? /tongue-in-cheek

In other words, she maybe looks conspiratory, but is not actively *conspiring* like he is. I wouldn't expect that guy to have eye-contact-of-shared-understanding the same way with a woman/female market. So yes, I think the second one is definitely aimed at men. Straight, young, black men, to be precise. :p

This billboard was up in my town last summer. It is an ad for Southern Comfort with the tagline "liquid panty remover" ick
http://www.lifeisajoke.com/pictures251_html.htm

[...] Law Professors points us to this collection of alcohol ads where they say the “not-so-subtle message of the ad was: ‘get’er drunk and she’ll [...]

The Southern Comfort ad linked to by the previous commenter is, of course, a well-known photoshopped parody, least anyone mistake it for the real thing!

Coincidentally, right now there is a magazine in front of me opened to an alcohol ad. It's for Sobieski Vodka. It's just a picture of a vodka bottle on a black background, and the copy says, "Sex may sell. But, it has nothing to do with making great vodka." I think I will pick up some Sobieski Vodka next time I am booze-shopping.

"Get your girl in the mood quicker, make your jimmy thicker. St. Ides malt liquor!"

Another way that these could be taken is that, while "she" (as it will inevitably be a woman - a man will rarely be portrayed as the object of a beer drinker's sexual desire) drinks a full strength or double strength drink.

The light beer drinker is only a little tipsy when the other party has been foolishly drinking anything other than that...

This really flips my stomach.