Last year, Fender Guitars unveiled the new Joe Strummer Signature Series ™, a pre-stressed replica of Strummer’s beloved guitar: a 1966 Fender Telecaster, which he played in the 101ers, the Clash, and with the Mescaleros from 1975 until his death in 2005. Here’s Strummer with his guitar: 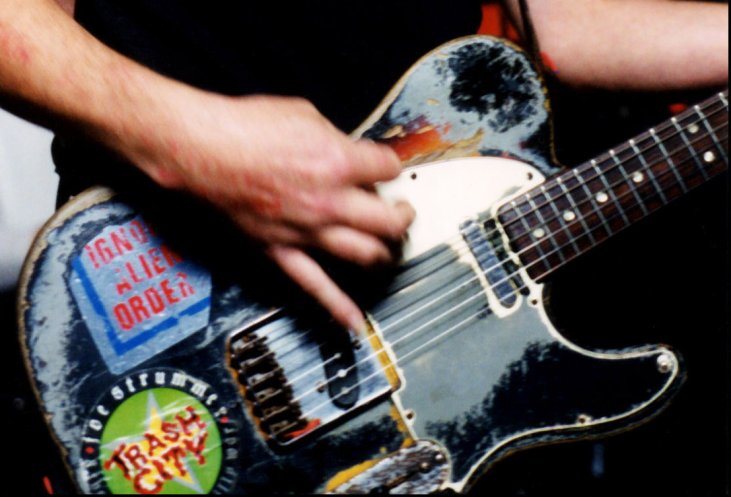 Here are some screenshots of the replica from the website: 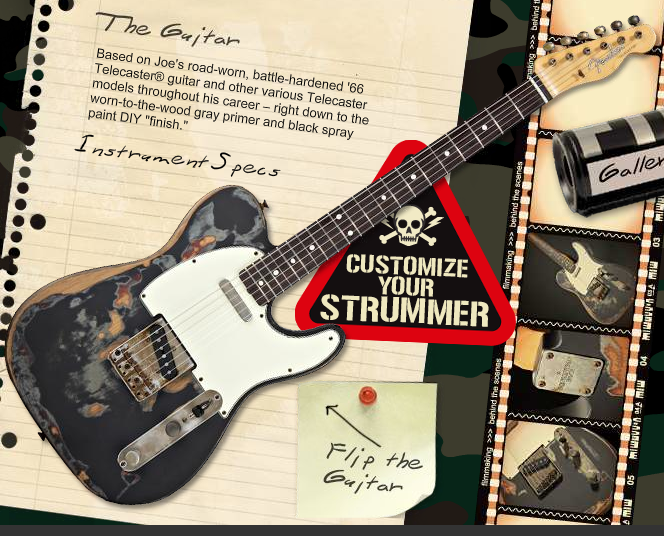 Some of the items available for customization: 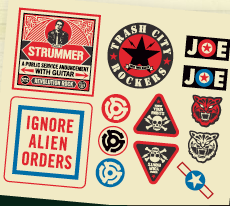 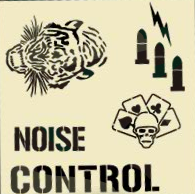 Let’s just pause for a moment and appreciate the irony of that one. (For those of you with little knowledge of the Clash, let’s just say that they were pretty much the exact opposite of this guitar, ideologically speaking.)

According to Fender’s write-up, this guitar is cool because “All his life, [Strummer] vigorously championed individuality, self-expression and change-tenets often reflected in the constantly altered look of his favorite instrument – his Telecaster” and this guitar was built “to celebrate Strummer’s fierce sense of individuality.” Buy the thing and you can champion individuality and self-expression just like Joe! Well. . .just like Joe and the 1,499 other folks who buy the limited edition with the stickers.

But perhaps a more interesting question is this: does any of this affect what you can actually do with it? The kinds of songs you could write with it? The kinds of shows you could play? It probably wouldn’t, or at least no more so than any other Telecaster would by virtue of its technical specifications. But put it in the context of a room full of other musicians, who tend to hold strong ideas about the art/commerce relationship, and you may find yourself the proud owner of a Fender Stigma-caster, depending on the room and the musicians.

On the other hand, Strummer – an artist whose work often wrangled around the intersection of art and commerce  – was by many accounts a complex person who disdained orthodoxy in all its forms. He might have been tickled pink by the tensions and artistic possibilities inherent in such a symbolically loaded guitar. The Clash did, after all, write songs about their recording contracts. (Also, the surviving Strummers have to eat and how they manage their husband’s/father’s estate is no business of mine.)

What else can we unpack from this guitar? Pretty much the history of modernity. You start with “the guitar” – an instrument traditionally produced by artisans called luthiers. But this particular style of guitar – the Fender Telecaster – is the first commercially successful mass-produced solidbody electric guitar. (Henry Ford:Driving::Leo Fender:Rocking.) Introduced in 1950 as the Esquire,* renamed after slight design changes and then a lawsuit re: the name Broadcaster being property of Gretsch Instruments, assembled on a factory line from mass-produced interchangeable parts, sold in stores and catalogs, heard most often via media and broadcast for most music consumers, the 1966 Fender Telecaster is truly a Modern guitar.

But this particular model of the genus Telecaster is Late Modernity to its elusive core:  a simulacrum of a particular instrument that trades on symbols of authenticity. With its “road worn” look, its namesake’s reputation and artistic output, and the genre of music it evokes, it’s a composite replica of the idea of the guitar wielded by a working musician known to most of us as mass-mediated collective representation. It’s also worth remembering that the idea of “Joe Strummer” is itself an elusive symbol, one of a number of names and personas adopted by John Graham Mellor over the course of his lifetime, that has now taken on a life of its own.

Sure, there are more properly postmodern guitars out there, but they all belong to Sonic Youth.

* Technically speaking, the Esquire and the Broadcaster/Telecaster are different guitars – the former has one pickup and the latter two, and there are some refinements to the design – basically, the Telecaster is the “finished” product. But to the average eye – and especially so when they debuted, given their shared differences from 99% of the other guitars out there at the time –  they’re pretty much the same guitar. [Editor’s note: Potts can really geek out sometimes, as evidenced in this footnote.]

Brady Potts is an entirely awesome sociologist specializing in soc of culture, co-editor of the book The Civic Life of American Religion, and the person we can always count on to geek out about “Buffy the Vampire Slayer” and the Drive-By Truckers.

For other examples of the commodification of sub- (counter?) cultures, see here and here.

I suspect that this guitar is marketed at the collector market, not the player market. There's a rather huge market of guitar collectors, who constantly buy, sell, and trade guitars at hugely inflated prices, which tends to screw things up for players, who aren't exactly flush with cash, but could actually do something with a nice vintage instrument.

I'd expect most of these reproductions to wind up either sitting in someone's den, or screwed to the wall in some Hard Rock Cafe-wannabe rock club.

I know there is a replication of the Eddie Van Halen guitar--complete with scuff marks!

If they find a willing, paying audience for counter-culture, then they're going to find a way to sell it to an even larger audience. Look at Insane Clown Posse, a metal group that tried its hardest to be as repulsive as possible. They got packaged with the faux-violence of wrestling and landed their spot on MTV. Voila. A bigger audience, no more sub-culture, but there was definitely someone who cashed out on them.

Subcultures are recycled everyday for mass consumers. Honestly, if ripped jeans can sell for hundreds of dollars, then Joe Strummer's old guitar can certainly be replicated to be "customized" with stickers.

HP: Actually, there was this whole excised part of the post where I used a variety of currency calculators to figure out the list price of Joe's guitar vs. the current price - I was expecting this to be much more expensive, relatively speaking, but it turned out to be about the same price.

(See Gwen? And you said that part was "amazingly boring".)

I'm not so sure they're aiming this at collectors, though - it's pretty cheap and not exceedingly well made. But you're absolutely right about the collectors market jacking up the price; I blame ebay for this as well, because it consolidated the market for vintage instruments big time. "Pawn shop specials" are getting harder and harder to find - I doubt the pretty-much-pristine 1940s Rickenbacher lap steel I found for $250 in Birmingham a few years back would go for anything like that now.

Tina: Oh yeah, I've seen those. And I mock, sure, but I've been kicking around the idea of picking up one of those square Bo Diddley guitars.

Chloe: I try not to look (or listen to) at ICP if I can help it, ever.
But you're correct, of course, that the commodification of subcultures is old hat by now...

(So much for value-free sociology, huh?)

Now, I think this *does* bring up an interesting point about normative critiques - but one too long to get into here, sadly. I'll simply say that you could argue that the relative autonomy of a field is being colonized by the market here in such a way as to give the members of the subculture from whence that aesthetic and political stance sprang a fairly legitimate gripe.

Any Bourdieu fans out there? Would this count as a form of symbolic violence, do you think?

Also, this whole discussion brings to mind a funny story I heard one about RL Burnside.

RL, rumor had it, was known for arriving in town for a performance without a guitar, stopping at the first pawn shop he saw and buying the cheapest piece of junk (but playable) guitar he saw. He would then proceed to the gig, wow the crowd with a few hours of North Mississippi Hill Country Blues, and then auction "his beloved guitar" off at the end of the show to gullible college kids.

I don't know if that story is true, but I sure hope it is.

i loved this post, and I look forward to more from Brady.

I tried to use this in class today, and pulled up the Fender site, in discussion of consumerism and commodity fetishism, but not one of my students in a visual communication class recognized Joe Strummer's name! Damn, did I feel old.

They found my examples of True Religion "destroyed" jeans for upwards of $200 from the Neiman Marcus site more compelling.

...Let’s just pause for a moment and appreciate the irony of that one...