Muriel M.M. brought my attention to the catalog for Galls, a company that makes equipment and uniforms for public safety officers (military, police, firefighting, etc.). Muriel, an EMT, says,

The thing about their products is they don’t change much. Over the ten years I’ve received the catalog I can pretty much tell you what’s going to be in it: guns, batons, handcuffs, clothing such as boots, coats, uniforms, etc. Medical equipment and fire equipment are sold such as sirens, lights, latex gloves, breathing equipment. The list goes on and on.

But the newest version of the catalog Muriel received has something new: handcuffs now come in colors, not just silver. The options are blue, brown, gray, orange, yellow, and pink (light and bright!): 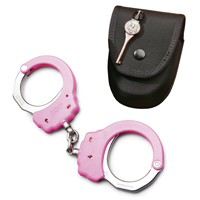 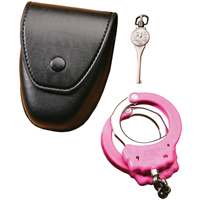 There are a couple of interesting things here. For one, it’s an attempt to provide a little (very limited) individualization to people who have to wear standard uniforms. Of course, it’s a superficial type of customization, similar to getting a cell phone of a particular color, but it provides at least some sense that the product reflects the personality or tastes of the user…something companies figured out long ago could boost sales (how many colors do cell phones come in these days?). Given that, I wonder how many police departments would allow officers to use brightly-colored handcuffs. Officers are allowed to buy customized items, but they can’t just go buy a different color of uniform; it may be that little personalized “touches” like this are allowed, though.

It’s also interesting to think about what the reaction might be to an officer who showed up at work with pink handcuffs. I wonder how many female officers would want to bring attention to their gender by using a product marked by the stereotypical feminine color. It also made me think of this post about cops in Thailand being punished by being forced to wear pink Hello Kitty armbands. I’m assuming a person would buy pink handcuffs to express their taste, but after looking at the old post, it made me wonder if anyone would ever put pink cuffs on male suspects just to try to annoy them. I bet one of my relatives who is a police officer would totally do that, except that it would require him to carry pink cuffs around all the time, which he would never, under any circumstances, do. He flipped out because his son liked a pink ball once.

NEW (Aug. ’10)! Garland Walton sent along these pink boxing accessories: gloves, tape, and a mouth guard.  All in pink! 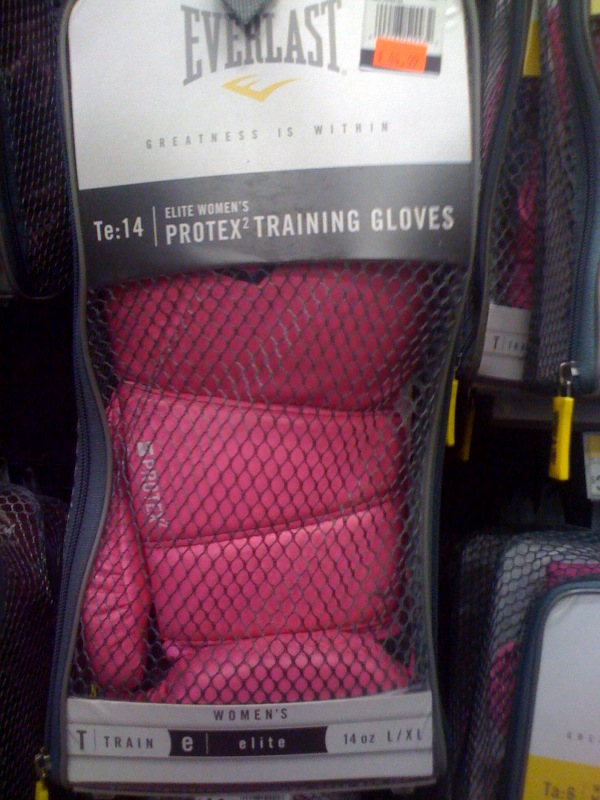 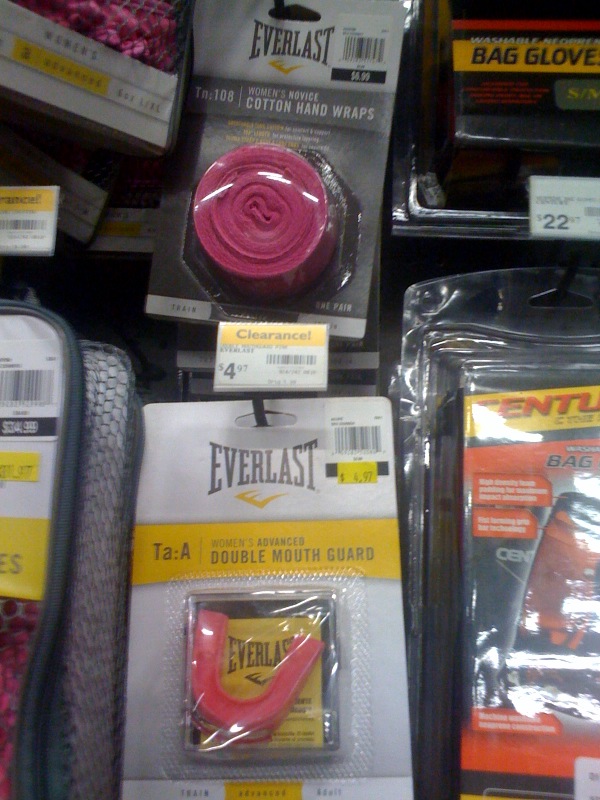 See also our post with a cartoon riffing on how people seem to think that pinkification is the answer to gender inequality.

I suspect that the 'market' for these pink handcuffs is not actually law enforcement, in spite of their availability through this catalogue...

That's exactly the thought that occurred to me when I saw pink handcuffs.

I wonder what prisoners would say if the newbie walked in with pink handcuffs on.

I noticed you used the word "policeman" instead of "police officer." Is there a particular reason?

EMS is part of the fire service not part of law enforcement though, of course, the three bleed together (pun intended) often. Firefighting is considered a brotherhood, a word which annoys me to no end. I often vocalize it's a siblinghood only to be ridiculed and isolated for voicing such an opinion. But I always make the arguement language is important and to prove my point I then call men who insist on using the words "brother" and "brotherhood" sister. It doesn't make me any friends but I get my point across.

I bet you're right about using the pink cuffs to humiliate suspects, but I wonder if there are also elements (in the conception of the product, not in the reasoning of the individual officers who would purchase these) of both a kind of dominatrix fantasy, and--maybe more likely--a "bring home the bacon and fry it up in a pan" kind of thing. There seems to be an admiration for and approval of women in traditionally male careers (or those that require a uniform) who still manage to somehow look "pretty" within the strictures of the uniform, perhaps through makeup or a manicure or tanning or whatever. It's like these little "touches" make the female employee more acceptable to the male gaze. Maybe the signifier that she still prioritizes her appearance makes her appear less threatening or more acceptably feminine; I'm not sure. As far as the woman who makes these choices, she may not be explicitly seeking male approval; maybe it's just nice to have some means of expressing your personality or femininity when everything else is uniform and prescribed. I can see these handcuffs being part of all of these things for women and men. I'm not saying any of it is conscious, even on the part of the manufacturer, but the fact that there are two colors of pink seems to indicate that something is going on.

Personally, I'd probably get green ones if they were allowed because it's one of my university's colors. When I ordered a Carhartt jacket to do field work for my last job, I got it in green.

Good catch, MMM--I'd used "officer" until I referred to my brother-in-law. And you are entirely right about the power of language (i.e., I managed to slip back into it, even though I was trying to avoid it).

The "brotherhood" thing is weird b/c it's used to both exclude women AND to exclude all "non-brothers," meaning that the rest of us can't possibly understand the stresses of the job (which, ok, no, we can't), but it's used as a justification for anything that happens on the job and to argue that outsiders have no right to try to regulate job procedures, behaviors, etc. At least that's how I've had relatives react when I've asked questions or, say, criticized a police officer related to me who used racist language to refer to suspects.

I worked for a building's security department for a couple of years, and we ordered from Galls on a regular basis.

Reading this, all I can picture is the guys in my office seeing the pink handcuffs in the catalog, cracking up over it, and joking to each other about which of the guys they should order them for.

The color pink as humiliation to men fascinates me to no end.

Spacd: the women I come into contact with downplay any sense of femininity they may have. The only real bit of femininity, besides their first name, is usually their hair, which of course, has to be kept back. But having short hair is just downplaying their gender for many.

Many of the women I have contact with tend to be very b risque in their manner, have strong handshakes, and attempt to be devoid of opinion and personality, qualities they believe their male colleagues have and desire in a female workmate.

Few are outspoken such as myself and many try to quiet me. I've made not a single female friend which I believe comes from wearing my scarlet F on my chest. Others try and silence me and often ridicule me, and certainly ostracize me because to support/agree with me will put them outside the circle of acceptance.

A science-teacher I know got tired of having her tools and supplies disappear. She was the only woman teacher, so she started buying or marking all her stuff in pink. She says it made her job a lot easier. And now they have other female science teachers, but pink is "her" color.

[...] Ben O. sent us a link to a company that makes pink protective gear for female construction workers.  We added it to our post featuring pink handcuffs for cops.   [...]

I have to say, I really like the pink boxing gear, maybe a little despite myself. Nearly of the rugby gear I own -- boots, undershorts, shorts, shirts -- is very specifically made for men (helloooo interesting slots in the crotch!), or I bought it in the men's clothing section. (The exception is my mouthguard, which is relatively gender-neutral.) This isn't some deep problem, but it must be really nice to at least have it recognized in *some* fashion that a person of your gender does a specific sport.

Having worked construction for a summer and been the only woman at three different sites I would be surprised that a company would make products specifically for what I would consider a tiny market. Also, as the only woman (and a young one- under 25 years old) I tried to blend in and not draw attention to myself. I have a feeling that an all pink construction worker outfit would not be a very popular choice for women in construction.

That's nothing. Here in NYC, they've started selling pink Statue of Liberty hats. You know, those foam things that look like Lady Liberty's crown? But in pink.

I dunno, in Asia a lot of guys like pink. I sorta think the idea of associating pink with girly is ridiculous... It`s a cultural point of view thing.

That being said, I don`t think police are allowed to use non-standard issue handcuffs....

I think this is far more indicative of the generations that was gendered via colour from the 70s onwards coming of age, and marketers seeing a nicely programmed market.
If I saw a woman with such pink accessories, I'd think less of her professionally and personally, laugh and mock the product reading a catalogue too, for highlighting them selves in such an absurd way.
The exception being the tools, I marked mine with my initials and title - one most definitely higher than others (in blue, cos it was the only sharpie I had).
I work in film, 12-16 hour days the norm, women I know (and hire) on day 14 after 6 hours sleep max a night, couldn't be arsed to pretty themselves up.... but even I have been known to throw on the basics of makeup when the stills photographers show up. There's a reason we all wear caps...