Markus G. alerted us to some of the coverage of Samantha Davies, one of the few women to ever compete in the Vendée Globe, an around the world non-stop sailing competition.

The coverage, in the Daily Mail, highlights her sexuality instead of her competence as a sailor.  Sexualizing women is problematic because it undermines any notion of her competence by reducing her to one purpose–fulfilling men’s lust–and erases, in doing so, her skills, work ethic, experience, and knowledge. 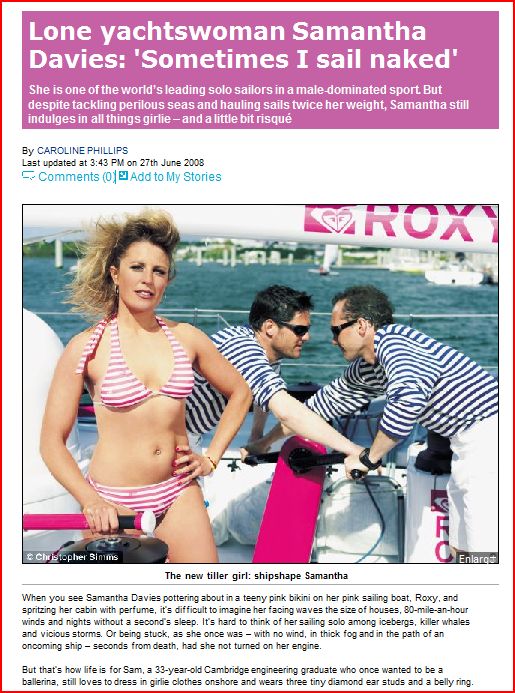 Text includes such doozies as:

When you see Samantha Davies pottering about in a teeny pink bikini on her pink sailing boat, Roxy, and spritzing her cabin with perfume, it’s difficult to imagine her facing waves the size of houses, 80-mile-an-hour winds and nights without a second’s sleep.

But that’s how life is for Sam, a 33-year-old Cambridge engineering graduate who once wanted to be a ballerina, still loves to dress in girlie clothes onshore and wears three tiny diamond ear studs and a belly ring.

Let’s get her sailing credentials out of the way – then we can move on to the important questions, such as: ‘How do you have skin that looks like a Clarins advert when you don’t sleep and your face gets ravaged by sun, salt and sea?’

‘In rough seas, sometimes it’s too dangerous to boil water, so you just eat freeze-dried food,’ she smiles. ‘But as I’m a girl, my nutritionist acknowledges that I have to eat chocolate each day!’

‘Don’t give me big muscles,’ Sam wails. ‘But you’ve got to pull up your mainsail, and you can’t do that without strong muscles,’ replies her trainer. ‘But my objective after the race,’ insists Sam, ‘is to have smaller, ladylike arms and shoulders!’

…she uses her sex to her advantage: ‘Whenever I don’t want to climb the mast to do a job at the top, I wear a short skirt so that I simply can’t get up there.’

Other pictures included in the news story: 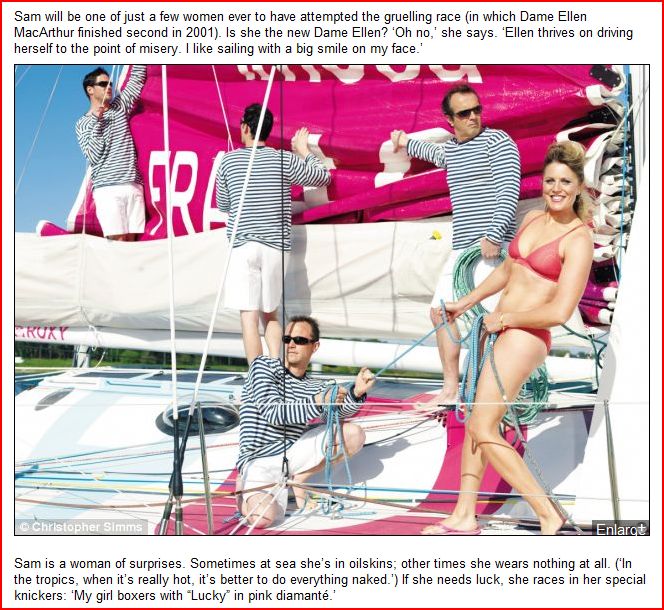 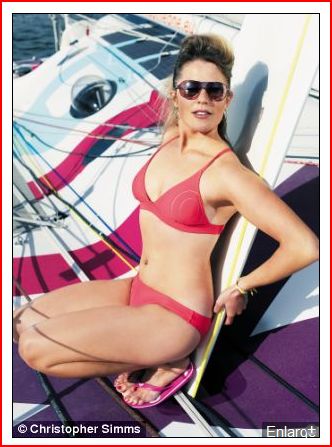 This is such a common narrative, especially in magazines targeted to a specific demographic: "ZOMG, woman is doing a man's job/hobby, but I still find her to be attractive!"

I feel slightly ill. I would love to know how they talked Ms Davies into this... and what the original interview sounded like before it was edited.

My mother-in-law reads this paper. It's usually pretty bad, but this is worse than usual.

This reminds me of that hegemonic masculinity video you guys put on your Youtube channel.
Pretty much, if a women should be seen at all, it should only be for her looks/sexuality (as a "groupie"). Anything else is somehow "masculine" territory, and a woman really has no place in it, unless she is fulfilling her role as a female.
So if a woman in a male-dominated field lacks the young, hot, sexy look, either she gets no attention at all, or she gets ridiculed and viewed as a threat to masculinity (like poor Hilary Clinton).
But if she does happen to look in the desired way, all the attention is on her looks, and she is seen as little more than a disposable sex toy.
Patriarchy exists. It doesn't get any clearer than this.

On the other hand, this is from the Daily Mail, which, I've heard, is about as respectable as the National Enquirer. So I guess it's not surprising that they'd put out this kind of garbage.

To Lazercat: It would be easy to write this off just as a cheap newpaper doing sexed-up puff pieces--if they devoted an equal amount of time to scantily-clad men doing their own "masculine" jobs. Or even feminine jobs. (Not that I'm saying you're dismissing the critique, just that the sexualization isn't even-handed or purely attributable to the quality of the paper.)

Bagelsan:
I guess I should have clarified my last post. I've heard many times that the Daily Mail is known for being extremely misogynistic (as well as homophobic, xenophobic, etc), so I wasn't surprised that this particularly overt display of sexism (and shitty writing) would come from them.
But I agree, it's still a reflection of a much greater cultural problem, as I had explained in my first post.

Update: after 60 days of sailing Sam is in fifth place. And here's a video update: http://www.vendeeglobe.org/fr/mediatheque/videos/play/802/

Sam Davies finished fourth out of the 30 sailors that started the competition after 95 days of sailing.