Sex Offender at this Residence

This Halloween, in Maryland, sex offenders who had been released from prison were required to put this sticker in a front window (news story here). 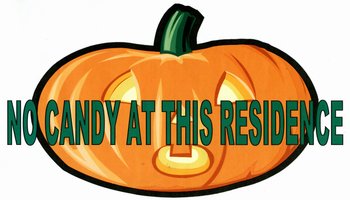 I can’t say it better than Gwen, so I quote her from this post:

I find the intense stigmatization of child sexual abuse, compared to other crimes, fascinating. With other crimes, once you finish the terms of probation, you’re pretty much done with the criminal justice system. Only with sex crimes (and generally only if they were against children) is there a requirement that the ex-felon register with law enforcement every time s/he moves even once probation is over, sometimes for a certain number of years, sometimes forever, depending on the state. I mean, you don’t have to do this if you murder someone, or even lots of people (or even if the victims were kids). Our culture currently defines child sexual abusers as unique, particularly horrific criminal who can never really be rehabilitated or reintegrated into society.

I wonder, though, to what degree this law makes children safer. It seems like a false sense of security–if you just know who the convicted sex abusers in your neighborhood are, you can protect your kids. Yet most child sexual abuse is committed by people known to the child and his/her family, not a stranger who just moved in to the neighborhood, and very often they have no criminal record, so these types of programs would be useless.

I am curious what the percentage of repeat offenders is between different types of crimes. If it is higher with sex offenders, then I guess it makes sense that one would have to tell all their neighbors. On the other hand, I think I would probably want to know if my neighbor had served time for murder too.

Even if 'Megan's law' only protects one child from being molested, it's worth it IMO.

If people care about their kids trick-or-treating, they should go with them. And since none of those Halloween stickers say what the sexual offenses were, it's all pretty pointless to have them up. Sure, that person could be a molester of toddlers. More likely, it's an adult male who raped an adult female. Or it's a teenager who had an underage girlfriend and her parents pressed charges in a state didn't have a "Romeo and Juliet" law. Or it's someone who went pee outdoors and got arrested for exposing himself. And by teaching kids to focus on the guy with the sticker in his window, they will easily assume that everyone else is safe.

If we want to protect children, we have to teach them to recognize forms of threat beyond the carefully labeled one. After all, we don't say, "You can drink out of any bottle that does not have a Mr Yuk sticker on it." I think Megan's Law and its related paraphernalia are bad for society at large, don't save children, and serve as superficial alternatives to dealing with the problem at a meaningful level.

Castrating adolescent pedophiles based on the evidence of mandatory penile plethysmography would probably prevent some child from being molested, but hardly seems like an ethical solution.

It's not unlike all the "parental protections" or whatever they put on TVs; having a responsible adult present makes it unnecessary, and is much more effective. (And that's leaving aside right-to-privacy infringements in the case of the TV thing, which definitely complicates the sticker example above.)

Sex laws have been built on misconceptions and myth.
The Supreme Court just ruled on sex offender laws where some factions of our government think by some inert reasoning that sex offender should be quarantined or executed. Video taken in another country shows where sex offenders were placed on a pole much like the Catholics use to use a pyramid shaped object and have them sit on it and spin, the pole travels through the body looking for the throat but if not found its ok because the sharpened end of the pole will come out somewhere to the delight of these very strange people who think such thoughts are a bit barbaric. The heritage of the act is in its self a brutal throwback to violent uneducated people who are so obsessed with any sex & the only way to deal with this kind of "hierarchy" of historic hysteria. A word taken from hysterectomy, hysteria is tied to castration, we are supposed to be the most advanced nation and we still have a death penalty when the rest of the world except for some nations we are still warring with/selling weapons too, while other nations went home our weapons dealers and torture lovers delighting in support for the death of people they don’t know or want to simply because they don’t know how to get money with out taking it from someone by force. Is that supposed to include mutilations? In my humble opinion this alone “is” terrorist activities as much as severed hands, ears, heads, or making a case with nothing more than an obsession justified by lies. The registry’s origin in the Jim Crow hang~um laws that brought disgrace to our nation allowing thieves and murderous societal bigots who have trashed any shot at making good of a program in its design to make money destroying our nation and its people. We can not survive using this behavior model because we are compounding the problem since the numbers are increasing to include the children they purport to protect.
The doctoring, castration/hysterectomy/health care/physic care of people through sex laws that have damaged everyone it has touched. What about the people who are being used by the Medicare programs that requires these mutilations for both men and woman after they take their means of support? Digging around in someone’s genitalia because you want what a weaker nation? Can't you see? You have created the model and it is worthless! Why don't we just indiscriminately kill people we don't know? That is statically the next sex offender, because over 90% of all new offences are committed by someone “not” on the sex offender registry and the numbers are increasing not decreasing so as a behavior model this is really worthless.
So what is the use of such laws as the sex offender registry other than to terrorize people? With the murder of so many sex offenders and the continued disregard for life by the use of the registry it will be no time at all before the federal government will be held liable for their deaths through federal court.

"Yet most child sexual abuse is committed by people known to the child and his/her family, not a stranger who just moved in to the neighborhood"

But this is the point of Meghan's Law. Meghan Kanka and her family knew the man who killed her as a neighbor, but didn't know he was a convicted sex offender. He asked her into her house, and she went. Had Meghan's family been aware of his arrest record, they probably would have instructed their daughter to never enter his house, and she'd be alive today.

It's like the person has leprosy and you're throwing stones at them. I agree that it is okay to tell people that a person is a sex offender but you can't simply decide that they won't learn from their mistakes. Maybe they could have a police officer with them when they give out candy or somthing, but that is better than ostracizing them.

Two thoughts: one that I really doubt that child molestation is any more common now than it used to be. We are, however, more aware of it.

two: Presuming that someone who would willingly molest a child is not sane, that being the kinder version (the other that they are willingly evil) can one guarantee that this person would become and remain sane? If such were to happen, wouldn't the realized gravity of their offense send them back to crisis?

So: In my view, the kindest thing to do with such a person is kill them. If they are innocent, the penalty devolves upon the killer. The then dead person, being innocent, is happy in their version of Valhalla. If they are guilty, then we know one thing: They will molest or kill no more children.

Theora: Obviously I don't know what kind of neighborhood you live in, so your state may be different, but in my mid-sized Midwestern town the majority of the registered sex offenders have abused children, not other adults. There is a website for my state that lets you type in your address and then see how many sex offenders are in the area, and it gives a very brief description (a phrase only) describing the charges. I have lived at two different residences here, and in both cases when I checked the website there were no registered offenders in the vicinity who were convicted of assaulting an adult. Every single person was convicted of assaulting a child, or there were a couple cases of statutory rape (and those are harder to decipher since the individuals' ages are unknown). Find out if your state has a similar system of reporting.

That doesn't, of course, mean that children shouldn't be supervised at all times, and of course sexual abuse can occur within the family. But if I were a parent, I would want to know who might be a potential threat to my child.

I'm not sure that acts such as this are saying that child sexual abusers are unique in that they can't be reintegrated into society; I think Megan's law and others like it are about punishing child molesters with social stigmatization because we consider the crime considerably more heinous. These sorts of measures act as a sort of permanent scarlet letter; no they may not actually prevent the majority of child molestation, but on some level criminal justice isn't just about prevention; it's also about the punishment of criminals, and to some degree, about the vengeance of victims. It may stand out to those of us who view prison time as a sort of token ethical economy wherein criminals pay their due and then supposed are clean, but it makes sense that child molestation would have these sorts of punitive and humiliating measures. As a society, we find murder justifiable, acceptable, or at least understandable in certain circumstances (e.g.: war, self-defense), even if in circumstances in which it is illegal (the crime of passion). We do not however, find any mitigating circumstances for the sexual molestation of children; there's no social context in which it is expected, accepted, or even understandable behavior. So no, signs such as the one posted above probably don't have a lot of efficacy as prevention, but as humiliation, they're effective, and I for one don't see a lot of evidence showing that forcing molesters to put "no candy" signs on their windows uses up all the political capital one could be devoting to trying to enact more substantive measures against sexual abuse.
-g.

Research shows that sex offenders, particularly when the attraction is towards children, have the highest rate of re-offence. That said, I agree that the "sex offender" label is thrown around too freely (as was pointed out, it can include a teen taking pictures of herself or public urination). I also wonder, did anyone check to see if the stickers went up? My experience in the justice system tells me that criminals rarely do what they're told, especially if it would inhibit their next crime. If I was a child abuser looking to harm a kid on Halloween, I wouldn't put the sticker up!