I found this Merrill Lynch ad in The New Yorker last week: 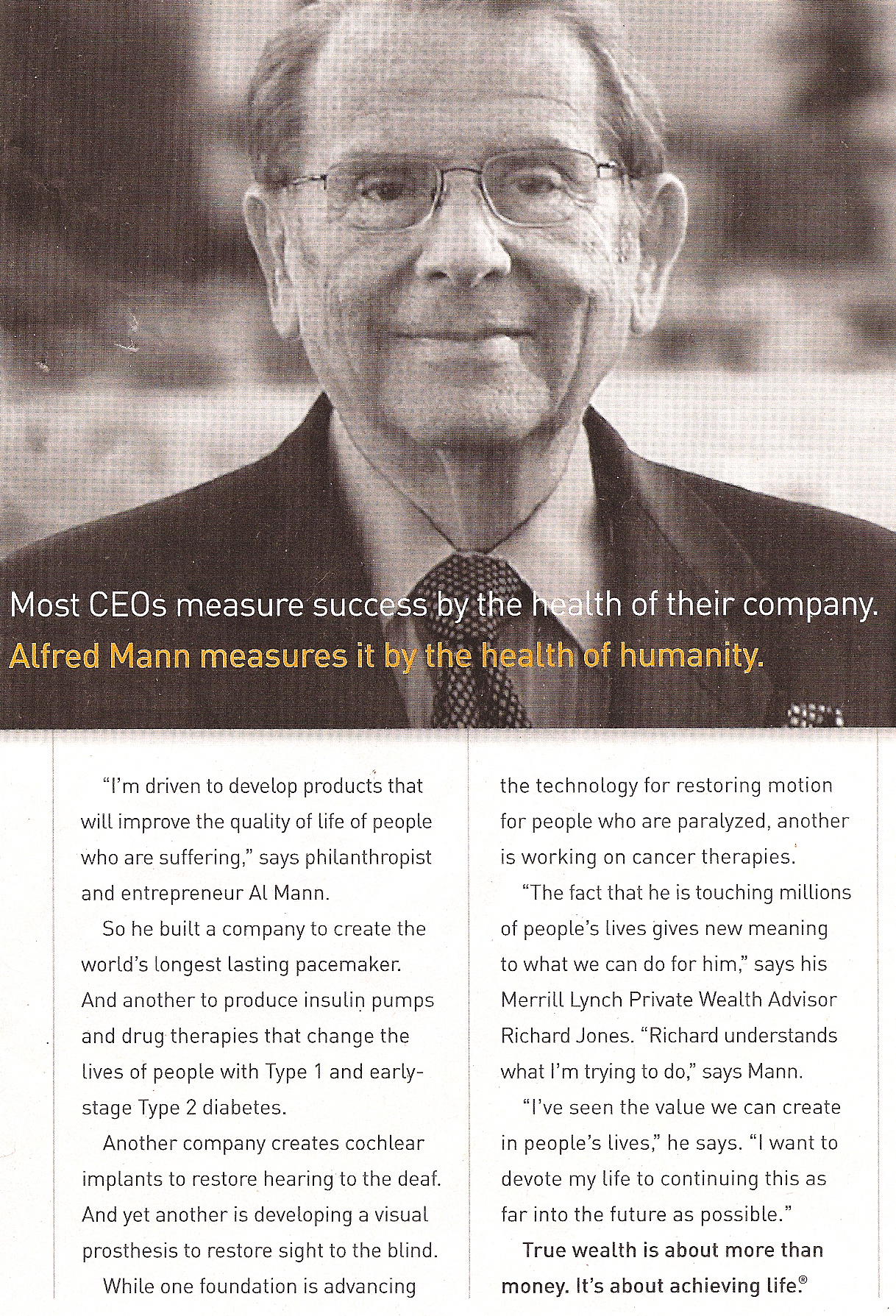 What I found interesting about it was the text, which is talking about how the guy in the photo is a philanthropist. Examples of his products to “…improve the quality of life of people who are suffering” include better pacemakers, insulin pumps, a visual prosthesis for the blind (who knew?), and cochlear implants for the deaf. The reason it drew my attention is that while (to my knowledge, anyway) pacemakers and insulin are generally accepted as useful technologies that improve people’s lives, cochlear implants have been the subject of controversy. Many people in the deaf community argue deafness is not a “disease” or a “disability,” but simply a state of being (or a subculture), and that efforts to “correct” deafness are offensive and even culturally oppressive (for an example of this perspective, see this discussion from the Drury University website). Thus, while most people would see efforts to treat diabetes as an unequivocal good, and few diabetics would oppose them, opinions about cochlear implants are much more divided, and those who would presumably be seen as the beneficiaries of this technology are not necessarily convinced they need it or that there is anything “wrong” with them that requires intervention. In fact, within the deaf community individuals may face peer pressure to reject implants and those who get them are sometimes stigmatized as sell-outs, basically.

It might be a useful image for sparking a discussion about the social construction and definition of medical problems. Who gets to decide whether a condition is a disease or is just a human characteristic (that is, perhaps uncommon but not automatically problematic)? What if the individuals who have the characteristic disagree with the wider public (or among themselves) about its interpretation? You might use it to spark a discussion about medical interventions and ethics–what are the implications of the increasing ability to use medical innovations to alter a wide variety of characteristics? Are innovations such as cochlear implants helping improve the lives of those who cannot hear, or are they simply reinforcing the idea that deafness isn’t “normal” and thus should be treated as a medical problem? And why does resistance to medical intervention arise surrounding some issues, such as deafness, but not others (for instance, as far as I know, there isn’t the same level of controversy surrounding blindness)?

I'm an interpreting major and there's a very good movie that talks about this as well as oppression related to Deafness called "Audism Unveiled." It's completely in sign with no captioning but sometimes they show the movie with interpreters voicing.

I remember seeing a presentation on CIs and although I can't remember the exact statistic, the majority of implanted people end up not using their CIs. Many also experience depression after implantation because their brains are not used to processing sound.

Also, there may be more controversy surrounding CIs and the Deaf community (as compared to Blind people and their technology) because they see it as a threat to their way of life. Inherent is the idea that for centuries Deaf people have been oppressed and have been forced to seem as "hearing" as possible. With this came the oppression of ASL and the development and spread of oralism. This is similar to the struggle the Aborigines, Native Americans and Irish had when the English came in and tried to oppress their language.

I think part of the confusion comes from the fact that many people don't realize that ASL is a separate language. Most people point to the blind and say "Well, they're not a culture." Well, they use a form of coded English. There ARE manually-coded forms of English, but that is NOT ASL. I have to explain how there's a different grammar structure, there idioms that exist in ASL that don't exist in English and that are words in ASL that don't exist in English and vice-versa. I have to explain that ASL is actually 60% French grammar. And THEN I have to explain how shared language is the basis of culture blah blah blah. Once people start realizing ASL is a true language, they'll start realize the fallacy of comparing it to blindness and they'll also realize how oralism and an attempt to make a person "hearing" can be seen as oppression.

So, Tracy, what you're saying is that Deaf culture is defined or facilitated by the participants use of ASL, which is a separate language. This helps me to understand the campaign to defend and preserve Deaf culture against oralism and "hearing" enforcement.

Interesting that "suffering" is linked to being blind or deaf. This, of course, rests on the old assumption that those who cannot or do not do something must be despairing their lack. But people who have disabilities don't necessarily suffer because they have disabilities; I've watched my sister, who has cerebral palsy, grow up, and I've determined that, at least in her case, more of her suffering was caused by people, institutions, architecture and general stupidity that did not easily accommodate her needs.

Nobody's forcing nobody to be treated. Innovations like the cochlear implant exist it is because there's a demand. So there must be people who's life are improved by it. It is not a matter of being normal or not, it is a matter of what the person wants. Someone wanting to hear doesn't turn deaf people into freaks.

I could be wrong here, but don't some people also lose their hearing through accidents, diseases, etc? I would understand the problem with forcing children who had never heard before to use the device, but if someone had been used to hearing for most of their life suddenly lost this ability I would guess that cochlear implants would be very useful to them, especially if they had no prior experience with ASL.

Theo, yes. Hearing impairment does not define a uniform class of people. Capital-D Deaf people are part of Deaf culture and use a manual language as their primary language (ASL in the U.S.). Lower-case-d deaf people are part of a hearing culture, and their primary language will be a spoken one. Some deaf people had hearing loss after they acquired a spoken language; others simply never had much/any opportunity to become part of a manual-language community.

One's position on whether the inability to hear is a disability is predicated quite strongly on whether you're deaf or Deaf.

So, if someone refuses an option to experience more of the world because of peer pressure, fear of the unknown etc., it's unpossible to tell how that reflects on his/her freedom and life. It's a manifestation of freedom and a loss of it at the same time.

I should mention that there are also requirements for the CI; not everybody can get them. For example, both of my parents are ineligible. My father lost his hearing before learning English so it would be impossible to learn it now at 70 years old, and my mother's hearing is not bad enough, even though she's entirely deaf in one ear and only has a little left in the other. When they implant people it completely destroys whatever hearing that person has left so they don't want to do it if you've even got a little bit of hearing left.

There's a conundrum here: Doctors have to implant early so that the child learns English, if they wait too long it becomes impossible. But if you implant early, you're basically taking the choice away from the child when he or she may not want to be implanted at all.

Personally, I would view deafness as a disability and implants to make up for it as transhumanist improvements on the body. If they come up with an implant to, for example, allow people to view infrared, it would make sense to use it to make up for the limitations of genetics and to avoid weakness. Just my opinion.