Advocating for English…and Against Puerto Rico

English First is an organization advocating the adoption of English-only laws in the U.S., which would mean government agencies and officials would not be allowed to conduct any type of business in a language other than English. They also oppose bilingual education and bilingual ballots. Here is a screenshot of their homepage’s banner; perhaps you will note a small irony, coming from an organization concerned about people being unable to use the English language:

There is a very clear anti-immigrant stance, which in some cases bleeds over into a general anti-Latino perspective. For instance, the website has a link to a letter sent to Attorney General Mukasey, expressing concern over Department of Justice statements about plans to crack down on voter intimidation:

Yet under the new DOJ policies as we understand them, anyone who dares complain when they see a busload of illegal aliens pulling up to a polling place could be arrested on the spot by agents of their own government.

What’s interesting here is the idea that you could immediately spot “a busload of illegal aliens.” I could be wrong here, but I’m guessing that to at least some members of the organization, any vehicle with Latinos (or other brown-skinned people) in it might be targeted as full of “illegal aliens.”

The organization also blames Hispanic legislators for the failure of the original financial bailout bill.

One of English First’s projects is No Statehood for Puerto Rico. Technically speaking, the population of Puerto Rico has the right to become a state, should a majority ever vote to do so. All Puerto Ricans are U.S. citizens and can travel freely between the island and the mainland, with no need for a passport or visa. Here are some images from the homepage: 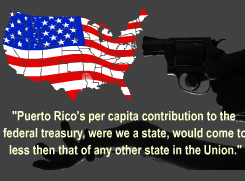 I think the hand at the bottom of that last image is supposed to be begging for a handout. 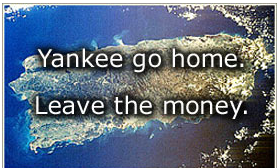 All of these images portray Puerto Rico as a money-sucking burden on the rest of the U.S. The website questions Puerto Ricans’ patriotism (because they protest military training at Vieques, unlike the good people of Oklahoma, who do not protest military training at Ft. Sill), links Puerto Rico to terrorism, and argues that Puerto Rico is a “proud, Spanish-speaking nation” and thus wouldn’t want to be a state anyway (leading to questions of why any of this is an issue, since the population would presumably never vote for statehood anyway). I am unclear whether English First advocates total Puerto Rican independence from the U.S., or just keeping it from becoming a state.

English First has a handy list of states that have English-Only laws, as well as which ones have been overturned.

You might also check out Lisa’s recent post on an organization that linked anti-immigration and pro-environment stances.

Looking through the list of states with Official English laws, I see a handful of names of Spanish origin in them -- Arizona, California, Colorado and Florida. How ironic that Spanish isn't recognised in Sacramento, Boca Raton or El Paso. You'd think that they'd want to preserve a sense of their history and origins.

On the other hand, if that happened in Europe, you'd have minorities demanding to make their traditional language co-official instead. Here in Spain we've got Galician, Basque and Catalan at the same level as Spanish in their respective territories, for example. Somehow we manage.

It's things like these that make me wish I spoke a Native American language...

Interesting. From the Boston Globe, "Since World War II, Puerto Rico has suffered more casualties per capita than any other US jurisdiction, and the rate is among the highest in the ongoing conflicts in Iraq and Afghanistan, according to Pentagon statistics."

I come from a "donor state" which gives more money to the Federal government than it receives back in Federal funding. In the spirit of the third graphic, can we now kick states like Alaska, Montana, and Alabama, who take in more money than they contribute, out of the Union?

Missouri has one of these on its ballot. What's interesting to note is that Missouri does not have a significant Hispanic population. What we do have is a significant refugee population, ranging from Tutsi to Bosnian. Also, for all the people who see this issue as being about immigrants not learning English: American Sign Language isn't English. If you cannot conduct business in any language other than English, you are excluding the disabled, refugees, new immigrants, and people who reside in communities where English is not necessary.

The debate on whether Scotland should become independent from Great Britain is also often couched in financial terms.

Anti-independence voices say that Scotland receives disproportionate subsidies (agricultural, fisheries, social improvement) relative to its population, and would therefore not be able to cope if it were independent.

Pro-independence voices often mention that revenues from large corporations within Scotland and using Scottish resources (notably North Sea oil producers) were and are taxed on a UK level and therefore benefit the UK as a whole, not Scotland in particular.

I'm not an economist so I don't know who is right. The Scottish National Party have been the majority party in the devolved Scottish government for a while now, and have received some criticism for not calling a referendum on independence.