Marriage–as a social and legal institution–has not always been what it is today.

In early American history, when families largely lived on farms and worked for sustenance, people didn’t marry because they loved each other.  And they certainly didn’t split up because they did not.  Marriage choices were highly influenced by their families and, once married, husbands and wives formed a working partnership aimed at production.  They teamed up to support themselves and make children who would take care of them when they were old and help them in the meantime.

Today, we still (generally) think of marriage as comprised of a man, a woman, and kids, but mutual love and happiness are now central goals of marriage.  This idea only emerged in the 1900s.  It hasn’t actually been around all that long.

I bring this up in order to shed some light on the pro- and anti- gay marriage rhetoric.

On the one hand, those against gay marriage need to define “marriage” in a way that excludes same-sex couples.  One way to do this is to refer to a “traditional” marriage (image found here). 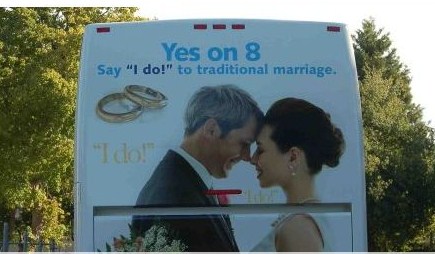 But there is no such thing as a “traditional” marriage, just a long history of evolving forms of marriage.  For example, few anti-gay marriage types would actually be in favor of returning marriage to one in which women were property that can’t contract, vote, testify in court, own anything, and have no rights to their own bodies or custody of their children (though the idea that women are property is still out there today).  Because there is no such thing as a “traditional” marriage (that is, no reason to privilege one historical form over another), when someone speaks of “traditional” marriage, they actually just mean “the kind of marriage that I like that I am pretending existed throughout all time before this current threat right now.”

This ad in favor of gay marriage does the latter. Mobilizing the social construction of marriage as about love, the commercial then defines same-sex relationships as about love. If you accept both premises, then, presto, you are pro-gay marriage.  That is exactly what this commercial is trying to do:

NEW!  This Swedish commercial for Bjorn Borg’s dating website, sent in by Ed L., similarly mobilizes the idea that marriage is for love and that gay men’s marriages are, therefore, beautiful:

oh, now I see you changed it to presto. nm.

The idea of love and happiness as the central goals of marriage only emerged in the 1900s? Wouldn't it really be the 19th century?

That was the whitest anti-prop-8 ad ever, right? There are, like, a couple of non-whites in California, if I'm not mistaken.

I get that it's a super-Christian I Cor. 13 thing, but I found it a little creepy that the only way gay marriage is palatable is if white people are dishing it out.

I see that there are a few (maybe two?) not-totally-white people in that ad, but the total lack of blackness is a bit startling. I live in NYC, though, and can't imagine a liberal ad so white.

Thanks Dubi. I had actually already fixed it to "presto." But, yes, "voila" is what I had meant.

@ A White Bear: I don't see what is so startling, given the situation.

There are a ton of white, conservative voters in California who - like people all over the country, nay, world - respond better to advertisements that are targeted to their racial and economic position.

Further, California is populated with exactly the same type of political strategists you find everywhere; strategists who use polls to locate particular demographics and target them.

The No on 8 campaign desperately need more votes and, strange as it may sound, they are more easily forthcoming from white conservatives than from African Americans, liberal and otherwise. So, the ads are a bunch of whitewashed tripe designed to appeal to the grandmas of Orange County.

The picture on the bus looks more like a jewelry ad than part of a political campaign.

[...] marriage by pointing out that men and men and women and women can love each other deeply.  Click here and scroll down for the [...]

[...] might compare these videos to the commercials in this post; in those ads, advocates of gay marriage try to rhetorically frame the issue as being about [...]