Breguet watches are extremely expensive luxury products; I found them for sale online starting at $11,000 and going up to $235,060 (on sale–$51,000 off!). I saw this ad for them in The New Yorker (where else?) and thought it was interesting how the company evokes a certain class sensibility by highlighting a flattering reference to Breguet written by an Important Literary Figure (Pushkin): 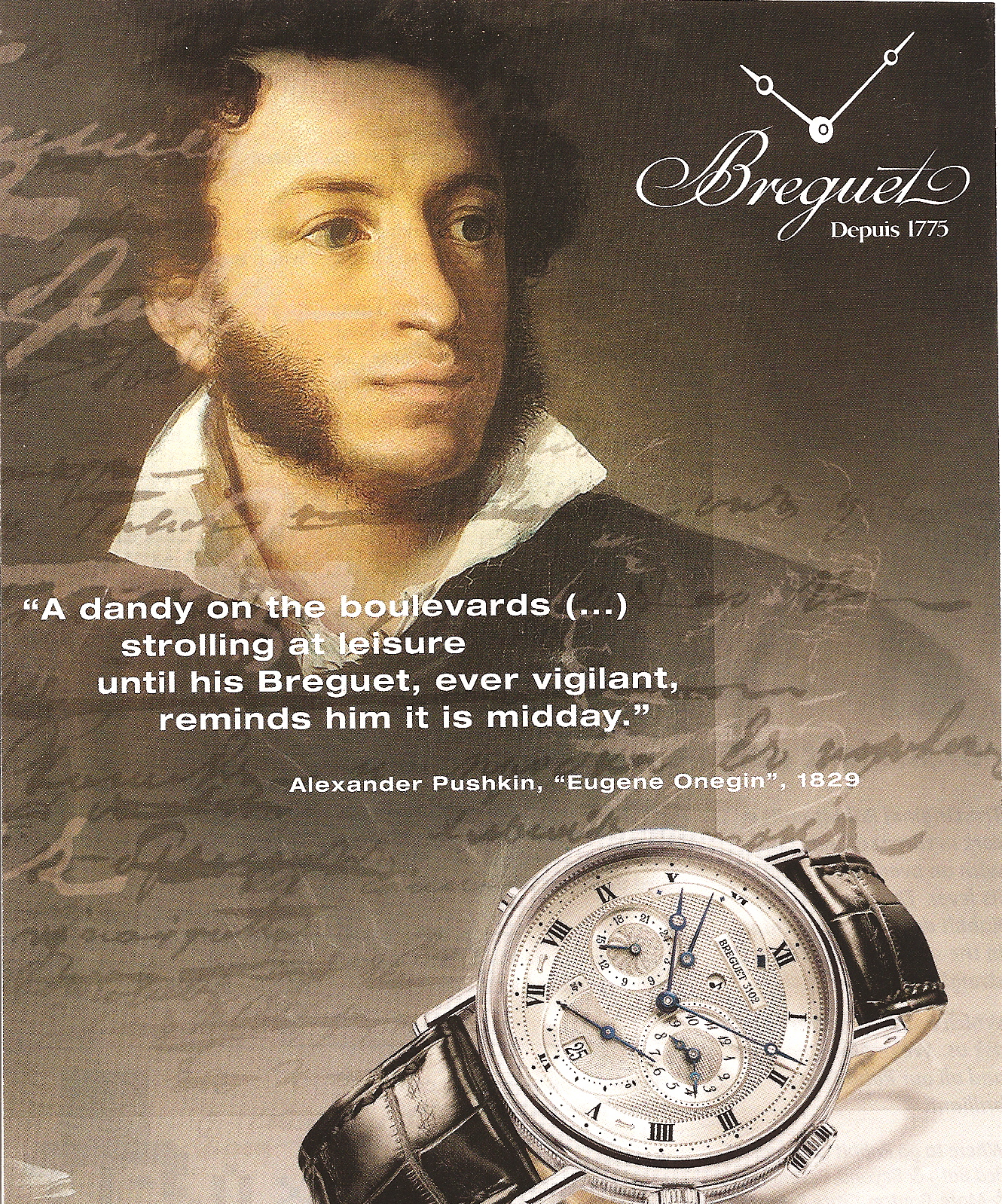 It’s also kind of interesting that the company clearly did not think their image would be damaged by the statement that the watch was worn by a “dandy,” a term often used to imply a man is overly feminine (though how negative the term is varies; recently, some hip hop stars like Andre 3000 of Outcast have adopted the term “dandy” and used it in a positive sense to indicate a man who is stylish and well-dressed, but without the negative implications of being effete).

I went to the Breguet website and read a bit about the watches. Each one has a “secret signature” and an individual number to guard against forgery. One section of the website is dedicated to “celebrated patrons”:

The House of Breguet was privileged to create timepieces for the diplomatic, scientific, military and financial elite. Among its clients, Queen Marie-Antoinette, Napoleon Bonaparte, Talleyrand, the Sultan of the Ottoman Empire, Caroline Murat, Tsar Alexander I of Russia, Queen Victoria, Sir Winston Churchill and Arthur Rubinstein who put their confidence in the taste and artistry of Breguet.

There is also a section on “Breguet in Literature”:

The number of references to Breguet watches in French and foreign literature is an indication of the remarkable reputation enjoyed by both the firm and its founder. Breguet is now so deeply rooted in European culture that the name is virtually a sine qua non of any depiction of the aristocracy, the bourgeoisie or, quite simply, a life of luxury and elegance. Stendhal, Mérimée, Pushkin, Balzac, Alexandre Dumas, Thackeray and Victor Hugo are only some of the writers who have made reference to Breguet in their works…

The ad might be useful for a discussion of social class and the way “class” is often used not just to indicate a level of income, but as a personal characteristic: you “have class” or are “classy” if you like the particular things, speak and dress a certain way, etc. Here we see a connection between wealth, an appreciation for (French and foreign!) literature, an affinity for aristocratic figures who recognized “taste and artistry,” and a particular (extremely expensive) product that connects you to those ideas and symbolizes “luxury and elegance.” By wearing a Breguet watch, you’re associating yourself with all those indicators of classiness and status…in addition to screaming, “I’m rich enough to wear a quarter of a million dollars on my wrist,” of course.

I saw this in the Geneva airport on my trip to Switzerland! Weird!