“Save the Babies!” Alternatives to Pink and Blue

Miguel sent in these photos from nANUFACTURE, a children’s clothing store based in Valencia, Spain. The advertising campaign is “save the babies.” This first one was found at the company website: 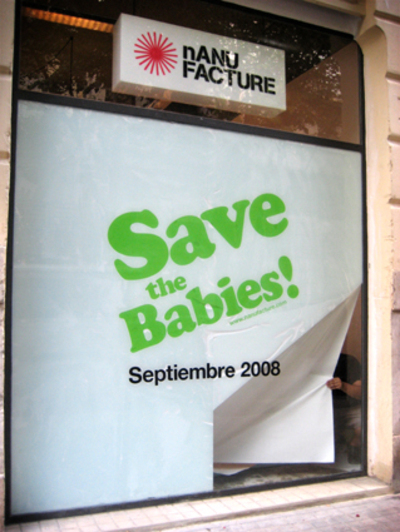 This one was found here: 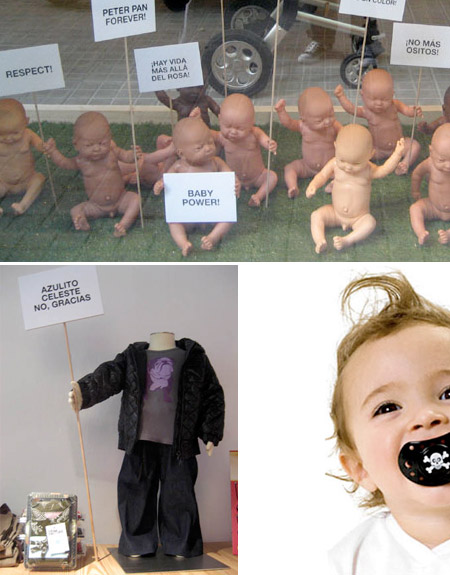 The babies in the top photo are holding signs in Spanish that say “there’s life beyond pink” and “no more teddy bears!” The sign in the lower left photo says “no sky blue, thanks.”

Given that the website includes photos of Angelina Jolie and Brad Pitt and of a scene from the “Sex and the City” movie that shows toys sold at the store, and the super-hipness of the clothing line (flared-leg kids’ jeans, anyone?), I assume the store sells expensive stuff. Their mission statement includes statements about supporting breastfeeding and natural childbirth, as well as selling children’s clothing. According to one of the owners (I think my translation is accurate enough),

Dads and moms…have their first son or daughter when they’re around age 30. That is, they’re young! But it appears that no other store owner in this sector [children’s clothes] has noticed this small detail.

They go on to talk about saving babies from ugly polka dots, teddy-bear stencils, and pastel pink and blue.

I think this is an interesting mixture of elements. It’s nice to see any store selling alternatives to the pink/blue dichotomy and providing forums for breastfeeding advocacy groups and such. But I also think the clear marketing to a certain type of parent is worthy of discussion. Obviously, kids don’t know whether they’re supposed to think polka dots are awesome or lame. This is about “saving” kids from things these young, hip parents think are lame or uncool. We’ve had a couple of posts recently about politically labeling kids (see here), but here we have an example of non-political labeling: as too hip and cool for the tastes of the masses. These images might be a useful addition to a discussion of how children’s clothing often reflects parents’ tastes and ideas about themselves (as cool, progressive, liberal/conservative, etc.), or about the rise in expensive children’s clothing marketed to the middle and upper-middle class.

Full disclosure: I do think many items of children’s clothing are hideous, but I’m probably in no position to judge, since my mom once made us shirts out of some rags she found in my grandpa’s shop that he planned to use to sop up oil. Yes, we actually wore rags.

I find it *extremely* jarring that they talk about "saving" the babies here, but are referring to mainly stylistic choices. This phrasing minimizes the circumstances of plenty of children who really *need* saving; sure, a pink teddy bear might be less "cool" than a little girl's hip parents prefer, but at least she's not dying of malaria.

What dichotomy, where? Gymboree's been selling primary colors and neutrals for 0-6s for at least 15 years, in nearly ever mall in the US. You can easily dodge pink and blue at Baby Gap, too, in all the same malls. Look at the baby racks at Target or Sears--they're hardly a solid sea of pastels. Now, if some parents would rather spend bigger bucks on equivalent gear with hipper(?) tags, I'm sure Nanufacture will be glad to take the cash instead. But they're not offering baby clothes in *any* colors or combinations you can't already buy elsewhere, anywhere, everywhere.

And I'll warn again that, while black is great for hiding baby stains, it also showcases carpet lint and spit-up better than any other color.

Penny--I think you're right to a degree, though my experience of late has been that stores (even stores in the same chain) vary widely in what they have available. I'm always picking up stuff for my niece and nephew, and sometimes I find it really easy to find things that aren't pink or blue (and especially for boys, there's lots of green, red, orange, camo, etc.). But just yesterday I was at the Target nearest my house looking for something for a friend's 3-month-old daughter, and I swear to you, I couldn't find any shirts or onesies that weren't either pink or lavender in sizes for 0-3 months. Up in the toddler section, there were some pale greens and turquoises for girls, but in that particular store, for infant girls, it was really limited to the pink/lavender scheme.

And yet I know earlier this summer I was at a Kohl's with a friend and they had a section of yellow and green things for infants, though it was smaller than the pink and blue section and sort of on a back wall.

Maybe they do market research to decide how many people in the area might be "progressive" and/or might not know the sex of the baby ahead of time, and then decide how much variety to carry in infant clothes?

Black would be the worst color in the world in my house, as I have two dogs. My child would look like an unkempt woolly beast. I would probably get Child Services called on me.

"Maybe they do market research to decide how many people in the area might be “progressive” and/or might not know the sex of the baby ahead of time, and then decide how much variety to carry in infant clothes?"

That would make a lot of sense. I live in a very-NOT-progressive area and all one has to do to figure out which kid's clothing section one is in is to look at what the colors of the clothes are. The girl's sections are ALL pink and purple (with the occasional hint of lime green) while the boy's sections are all very dark colors like red, brown, green, etc. Even in the sections for teenagers, the guys' colors are still mostly dark while the girls' are very bright.

Just because the sign says "Infant girls" doesn't mean you have to shop in that section for a newborn girl. If you like the colors/styles better in the "Infant boys" section, shop there instead, it's not off-limits. And vice versa. I guarantee that the infant in question won't care. (The parents might, but you'd have to figure that out on a case-by-case basis.)

If this were my child, I would happily buy lots of things in the boys' section for my daughter. But I have some friends and family members who I think would be uncomfortable with, if not outright offended by, my buying a "boy" outfit for their daughter (much less "girl" clothes for their sons). My brother-in-law would throw an enormous fit that would threaten relationships throughout the family circle over it. That simply isn't an option for me unless I'm willing to offend people and possibly have access to my niece and nephew cut off because I dared to buy her something he identifies as boys' clothing. Given those limitations, I do my best to buy her things in comfortable fabrics in relatively dark colors--things I think a little kid could run around and play with the dog in and not get yelled at for staining it.

I think the idea that I could just give clothing identified as girls' or boys' to other people's children with absolutely no concern for the sex of their child simply because *I* is based on assuming that I'm buying gifts for people who are equally indifferent to gender color codes. I am not. In some cases I choose to do it anyway, with the assumption that the worst thing that will happen is that the kid will never wear the clothes. But in others, I think the negative consequences of breaking that rule would be quite severe, and so I try to find something that doesn't make me totally want to puke while not completely freaking out the parents of the gift-receiver.

Oops, the first sentence of the second paragraph was supposed to say "because *I* don't care".

Of course, you can avoid the commercially-available choices entirely by making your own gifts--knitting, crocheting, or sewing baby clothes can be very satisfying, quick and easy to do, especially in the age of YouTube tutorials, and that opens up an infinite selection of colors, combinations, and styles. (They still might not wear them, but that's out of your control.)

If you don't have time for that, there are many, many woman-run small businesses online (check Etsy for starters) that sell handmade, good quality, interesting baby clothes of all varieties. Not usually cheap, but at least you can email the person whose hands created the garment--which is never true of the stuff you can buy in malls.