Eric S. sent us a link to the webpage for the Sun-Maid Girl, the girl used to represent Sun-Maid raisins. Here is the original painting of the first Sun-Maid Girl, Lorraine Collett Peterson:

The logo was most recently updated in 1970; here is the current incarnation:

Sometimes we forget that in 1915 there were no electric hair dryers, that television would not be invented for decades to come, and that automobiles were not in every home. Life was much simpler, more rural, a lot less hectic and sunbonnets were still part of women’s fashion in California.

I like the romanticization of the past there. In 1915…World War I was going on. I guess life was “less hectic” in that you didn’t have a Blackberry to check every 15 seconds, but overall, I’m not sure I’d say it was “simpler” in a way that implies everyone had time to just sit around eating raisins and drying their hair in the sun.

To Payne, the sight of the red sunbonnet and the pretty girl in the morning sun was the ideal personification of E.A. Berg’s brand name SUN-MAID.

This might be an interesting addition to some of the images in this, this, and this post about the sexualization of food. Whereas the women in those instances are mostly explicitly sexualized, in this case, the product is being associated with an idealized, non-sexual “maiden” version of femininity. I just thought it might make a good contrast if you’re discussing connections between women and food–the use of female sexuality and idealized female chasteness as marketing tactics related to food products. I wonder if Sun-Maid has stayed with the de-sexualized icon because raisins are associated with children?

FYI, Sun-Maid was one of the companies boycotted by United Farm Workers of America, the group let by Cesar Chavez.

NEW: In a comment Adriana pointed us to Ester Hernandez’s parody of the Sun-Maid girl: 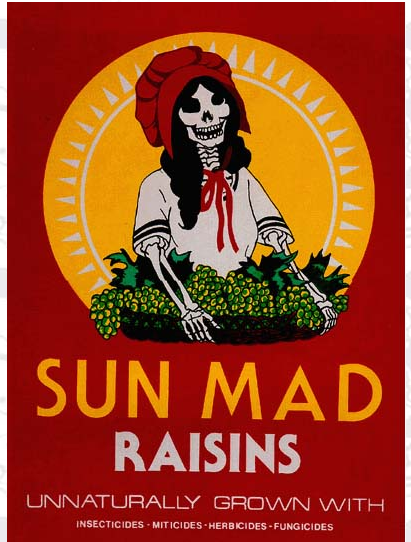 Hard to tell from such small images, but it looks like the latter version has been anglicized — the older one still has fair skin, but her features (again, it's tiny so I could be mistaken) appear to be more "ethnic" (in the hackneyed, non-white sense).

[...] a year ago, Gwen posted about the evolution of the Sun-Maid, the young spokeswoman for Sun-Maid [...]