Stephen W. sent us this picture of the “Hispanic” foods aisle at a Walmart in Sioux Falls, South Dakota: 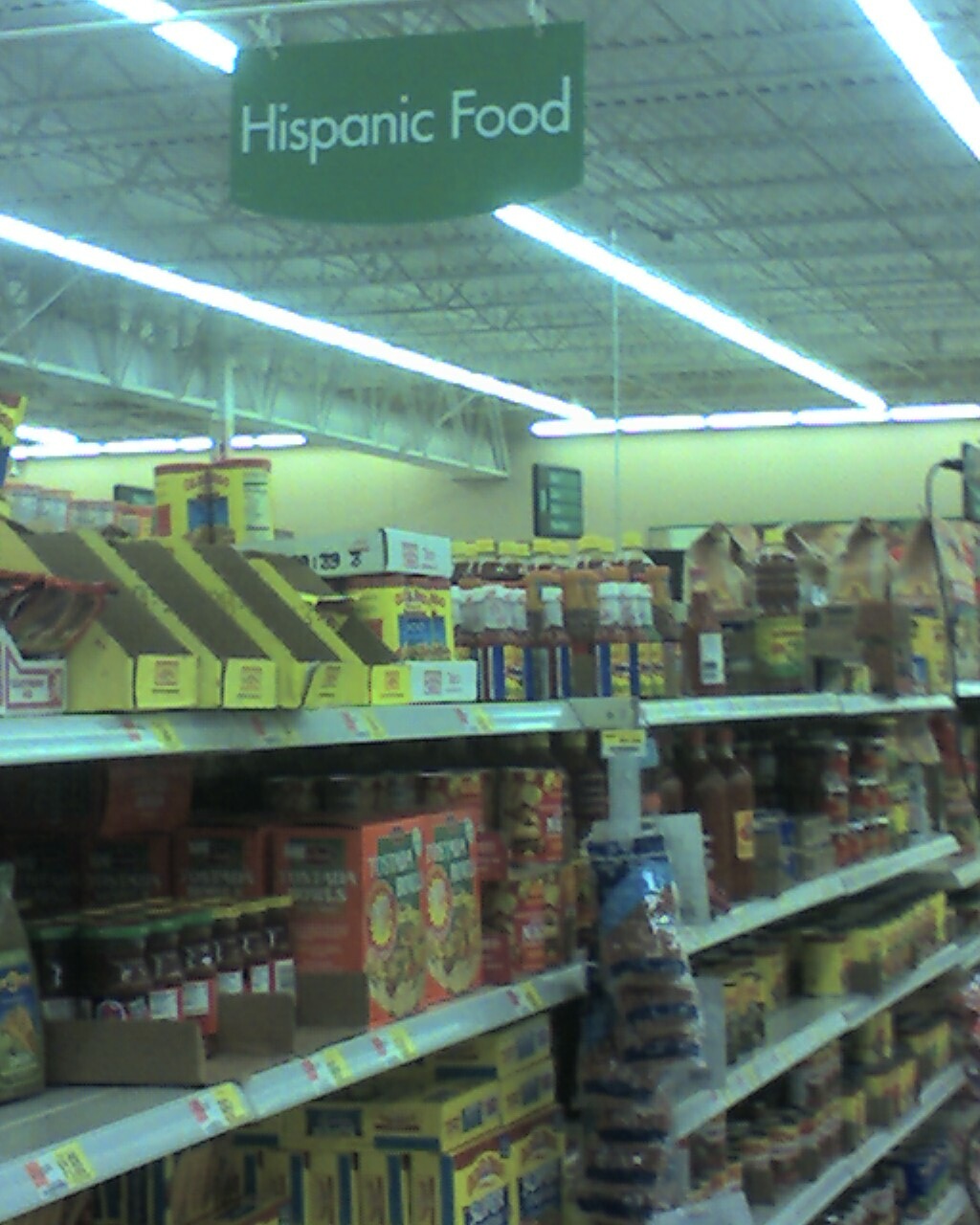 Why is this odd?

The word “Hispanic” was actually invented by the U.S. government to mean Spanish-speaking.  The government invented it for the census because they wanted to be able to label and identify all Spanish speakers.  “Hispanic,” then, unlike the terms “Latino” or “Chicano,” is not an identity that originated among those to whom it applies.  Further, though it is sometimes used as a euphemism for “Mexican” or “Latino,” Spanish is only spoken in Latin America because of the conquest of parts of Latin America by Spain.

Given the history and use of this term, what would “Hispanic” food be?!  (According to Walmart, it’s salsa and tacos.)

NEW: Another use of the term “Hispanic.”  This time on a bag of peanuts passed out on a Southwest Airlines flight. 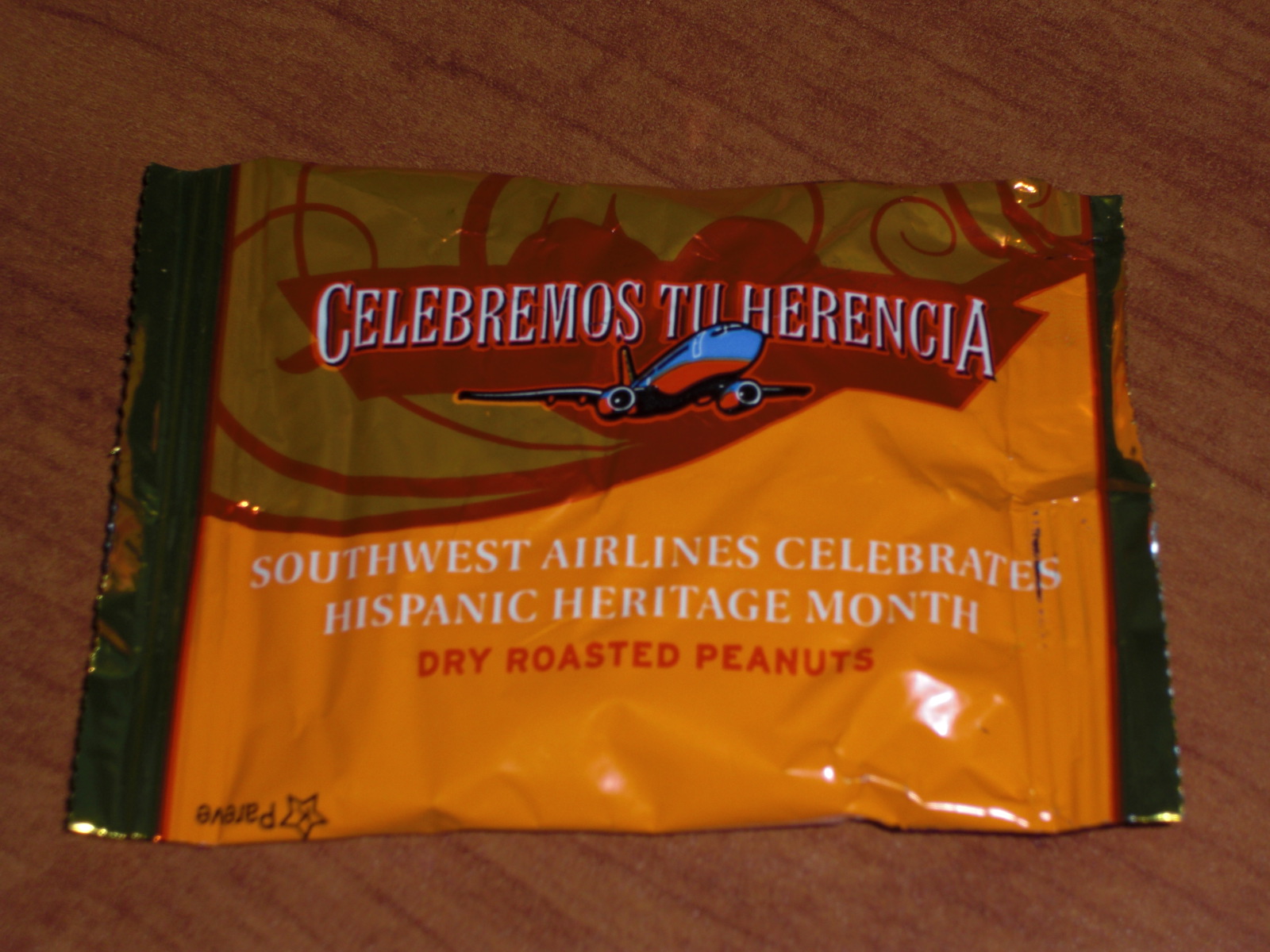 Thanks to Stephen W. for this link, too!

I guess that is a kind of ethnocentrism, trying to encompass all the regions of Latinamerica in salsa and tacos, which, by the way, is not the only food mexican people eat. Funny that MTV did a better job when they came up with the award for the LA MTV music awards: a tongue. That is practically the only thing you could argue that Hispanic America (not even latin america) have in common, the language.

"Identity tags" are always tricky. "Hispanic" is an ambiguous word, but what's opposed to Latin America? Germanic America?. Most latinamericans use their country as primary identity (Mexicans, Cubans, Dominicans...). Iberoamerican may be slightly better but it has not as much tradition in English as in Spanish. Still the problem of oversimplification remains. What's American (U.S.A.) food? Just hot dogs and burgers?

It would be easier if everyone who feels perpetually slighted just give the sensitive types a list of "appropriate labels" that could be used.

In the early 90's in the New England area the proper term was "Hispanic" then "Latino" made a good run for about 10 years and now it is back to "Hispanic".

As for the sign-maker at Walmart? Give him a break.

The U.S. government didn't invent the word-- though perhaps they "invented" that particular usage. You may have simply worded it wrong, but it has a much longer and more complex history:
http://www.etymonline.com/index.php?term=Hispanic

Given its ambiguity and frequent incorrect use, the term 'Hispanic' usually comes across as sounding ridiculous to me.

There's only one region where Latin should be applied and that's Latium in Central Italy.

Hispanic excludes whole populations of Brazil and Portugal. I agree with alfanje that Ibero-american - or Iberic - makes more sense, since both language groups - Spanish and Portuguese are from the Iberian Peninsula. At least, it would include Brazilians and Portuguese-speaking people. The Catalan would feel right at home, too.

Don, I know very little about South America, but how come defining a people by the origin of their European colonizers is acceptable?

Indigenous people have the right to call themselves whatever they want, be it by language, culture or geography.

.... or stores could get rid of "ethnic" food altogether and just put it on the shelves with all the other food and call it "food". That way "Americans" could eat "food" no matter where there parents happened to be from.

Ethnic issues, race issues etc. are sooo passe. Can't we move on to something else to fret about?

[...] added another instance of the use of the government-invented term “Hispanic.” This time it involves [...]

Take Krogers feedback survey to get some discount on your next visit to Kroger.

The U.S. Government did not invent the word-- even though perhaps they "invented" that precise usage. You may additionally add Kroger Feedback have certainly worded it wrong, but it has a miles longer and more complicated history:

Given its ambiguity and common wrong use, the term 'Hispanic' normally comes across as sounding ridiculous to me.

"Identity tags" are always tricky. "Hispanic" is an ambiguous word, but what's opposed to Latin America? Germanic America?. Most latinamericans use their country as primary identity (Mexicans, Cubans, Dominicans...). Iberoamerican may be slightly better but it has not as much tradition in English as in Spanish. Still the problem of oversimplification remains. Asian Grocery Online Canada

These tips are kinda useful. If you ever face any problem regarding your air conditioner feel free to contact us!
AC Maintenance Dubai