Only recently in U.S. culture have rigid and narrow beauty standards for women extended to their vulvas. With the ascendance of cosmetic surgery (and its profits), marketing (and its effectiveness), and the visibility of pornography (and its mainstreaming), there is now cultural pressure on women to have the perfect vulva (see here and here).  This post shows before and after pictures of labiaplasty.

When teaching about this phenomenon, I find that my students balk at the idea that there isn’t, in fact, a “normal” vulva.  They are incredulous that vulvas would vary.  This incredulity is somewhat understandable.  If the women are heterosexual, they are unlikely to have seen many, or any, other than their own (and likely not even their own).  Gay men are in a similar predicament.   Gay women and straight men, being so young, are also unlikely to have seen many.   In any case, showing them that vulvas do, in fact, vary is helpful.

The image after the jump is an art project (image found here).  The artist cast women’s vulvas, so what you will see is 28 plaster vulvas made from molds.   The image is after the jump because it is not safe for work… not likely, frankly, safe for home either!  But it surely does make the point. 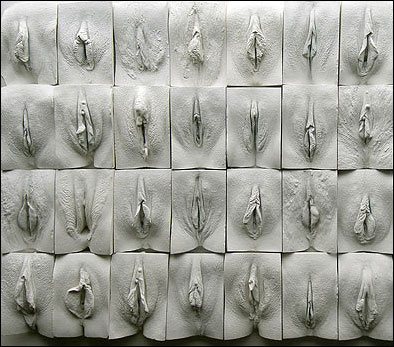 There has always been some standard for beauty, the difference I perceive is that cosmetic surgery has increasingly become a mean to achieve it. And I also agree that marketing does bombard people in a way that it becomes impossible not to wonder if you have a perfect vulva, which is also a little sexist because I don’t get to see a lot of marketing for cosmetic surgery to achieve a perfect penis (except for the spam in my mailbox).

Might also be useful in talking about the ordinary changes that happen over a lifetime--not only with childbirth (which is an obvious factor, but one that's more feared than understood, I think), but also with aging.

This image is safe for my home, and I have friends for whom it would be also safe at work (including a PhD candidate in sociology whose work emphasizes sexology).

I think what you meant was, in Susie Bright's words, not safe for prudes.

I always thought mine was weird because it stuck out too much - now, wow.

You have no idea how much of my anxiety this has just relieved.

I know mine changed after childbirth - and not more "stretched out" like the locker room jokes go. It was just different. I for one would like to see the myth of the physically loose, stretched out woman to rest. Thanks for posting this, and helping people see what diversity really looks like.

I'm uneven and it bothered me tremendously when I was younger. my first girlfriend was perfectly symmetrical and straight and neither fact did anything to relieve my anxiety. 20 years later and a little more experience tells me it's ALL good. I had a straight friend a few years back who opined to me about feeling weird about her unevenness. Hopefully I was able to put her at ease.. Oh and FYI my girlfriend's daughters call their genitals vulvas. In fact the 4 yr old asked the other day when men get their vulvas. My girlfriend, without missing a beat, said, "If they are lucky...when they get married.." I spit my drink.

I'm guessing that the need for the "perfect vulva" follows the same timeline as the (perceived) need for women to shave their pubic area. Wasn't there a post a while ago showing how pubic hair "disappeared" from Playboy centrefolds? I wonder how the two trends line up...

thanks so much for posting this.

i'm just wondering when some doctor is going to come up with the 2 for the price of 1 procedure..........trimming up vulva lips and implanting them into mouth lips so women everywhere not only get a 'perfect' vulva but the 'perfect' trout pout too! genius....

joking aside, it scares me that my daughters are growing up in a society where aging isnt as accepted and the standard of beauty is increasingly unnattainable....plastic surgeons justify their services as something that raises self esteem when actually it creates the opposite in a wider society......

by comparison, the sculptor Jamie McCartney has, by making this work, these casts of women's vulvas, done the opposite. by showing women what real women's bodies look like, he raises self esteem......i found it very reassuring and strangely enough, it hasn't cost me a penny!!

thank you for posting this.

How Ratings Boards are Driving Rates of Cosmetic Surgery » Sociological Images — May 31, 2010

[...] from increased exposure to pornography, is blamed for the rise. For reference, see our post on the natural range of labia shapes and sizes (nsfw) and our post featuring before and after pictures of labiaplasty [...]

this kind of makes me feel better about how my vulva looks.

[...] ago someone left me a link on SOAM’s Facebook wall and I followed it down the rabbit hole to this article. I was a little excited because I originally saw that picture (below) of the different vulvas in [...]

All of these types are normal. What I find interesting is
the following… Here we are serious in sharing experiences and concerns, yet we
go out in public and make fun of men pennies shape, color, size, texture and
etc….