Angela B. brought our attention to an animated map showing, over the space of some seconds, the growth of Walmart across the United States from 1962 to 2007.  Below is the final image.  It’s worth a click to watch the growth yourself. 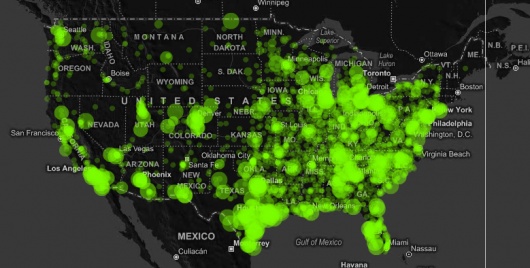 That made me physically ill. Holy crap.

After watching Indiana get swept over in 1990, it made me wonder where my mom used to shop in the earliest years of my life. I honestly can't think of a store that would replace Wal-Mart in our community, probably because they were all forced out of business.

OH my god Wal-Mart is so bad and it hurts so many people oh wow! Seriously, do any of you realize how many good things Wal-Mart has actually done for the American people. Firstly, it has greatly improved the quality of life of the American middle class by providing cheap goods through food, furnishings, and electronics equipment, albeit, as many point out, at the cost of other businesses. Little do people realize, however, that that is the exact goal of capitalism, a survival of the fittest belief that the more successful of the two businesses can drive the other out. Therefore: WALMART EPITOMIZES THE AMERICAN DREAM. One company grew into a global conglomerate and is now the world's largest retail store chain. Secondly, it does wonders for the economy by providing work for 1.3 million Americans across the country and, contrary to popular belief, the full-time employers are paid a livable wage with benefits. Thirdly, they do a lot of community development across the country (remember how much they donated to victims of Katrina only a few years ago?) The truth is Wal-Mart hatred is a load of unjustified bullshit.

That was like watching a cancer eat the country....talk about need of radiation treatment.

To poster "Dumbasses", You seem to miss the point on why people don't like Wal-Mart, as saying it helped America is a bit naive. For starters, as you mention, it did cause lots of businesses to close, and did not replace them with an equal quality company, and those 1.3 million Americans they 'provided work for', they took away significantly more jobs than that. Also, I noticed you said "contrary to popular belief, the full-time employers are paid a livable wage with benefits." Where did you get this information? I will say that they are sued by plenty of ex employees and have gone as far as to close stores to stop people from unionizing for better pay, benefits, and working conditions.
Also, why can Wal-Mart sell their stuff so cheap? Because it's all made in China. The import of goods from China has caused the loss of millions of jobs, as factories have closed in America. Sure, Wal-Mart is not the the only reason for this shift, but with over 10% of the US/China trade deficit being a direct result to China in 2004, it's obvious that Wal-Mart is a big part of the problem.
And as far as 'community development' that Wal-Mart has done, I can't imagine a company that's done more to kill communities. You can talk about dollars spent on social programs, or you can look at a community for what it is, just people. In countless small towns across America, the local butcher, local hardware store, local pharmacy store, and so many other businesses have been replaced by one company with inexperienced employees and high turnover rate. The community that evolved around independent companies with owners and employees that had been there for years is now gone. And as far as Wal-Mart donating to help out Katrina, The Walton's donated a whopping $8 million, which sounds impressive, but when you realize their personal worth is over $90 billion and that they donated less than 0.01% of their money it doesn't seem like a big deal. Of course 0.01% is bigger than 0%, but they don't really deserve a pat on the back for that.
Have you ever stood downtown in a small town that has been destroyed by Wal-Mart? It's one of the saddest things I've ever seen. Even shops that offered lower prices, better service, and better selection eventually closed because nobody wanted to go downtown anymore. What used to be the busy, thriving center of a community often ends up as boarded up windows and decaying buildings.
You may not agree with me, but before you say something is "a load of unjustified bullshit", you should at least try to see why people have this opinion.

On a different topic, this map could spark some great conversations about the changing American way of life.

Dumbasses, your name ought to be singular. Where in the 'exact goals of Capitalism' does preferential treatment like tax subsidies fit? How does supporting an ostensibly Communist regime like China's fit into the Capitalist model? You say one of the 'wonders' it does for the economy is employ 1.3 million people, but what I wonder is what the aggregate economic impact of the closure of the small and medium-sized businesses that were NOT offered subsidies to open their doors has been. Some of those 1.3 million are likely entrepreneurs forced out of business by the Blue Menace. Many more are likely to have been employees of those small businesses, so although they may employ lots of people, many already had other (and often better) jobs before.

Renee's comment hit the nail on the head; recall that another popular term for 'unregulated growth' is in fact cancer, and people generally don't like cancer unless they profit from it.

Mal-Wart has the resources to do great things if they choose, or they can choose to stick with business as usual and help along the continuing decline of the American economy and the rise of China's.

Here's a neat trick they play: You own a business that makes cardboard boxes. It's modestly sized and has been steadily growing for years. You are just big enough to get awarded a lucrative Mal-Wart contract, and of course it calls for lots and lots of boxes. They want to buy so many boxes that you need to make some investments in new equipment and hire more employees; it's great news! The Mal-Wart account instantly becomes 80% or more of your business, and you are happy with the arrangement. When your contract comes up for renewal, Mal-Wart says they like you and want to keep doing business with you, but they can only afford to pay X, which is an amount significantly less than you received in the initial contract. So, you either take the deal and struggle along with the thinnest of margins (carefully determined by their gang of corporate economists ahead of time to be the bare minimum you need to get by) or turn it down and instantly lose 80% or more of your business. Turning it down puts you out of business if you took out significant loans for the new equipment, so you are now a Mal-Wart vassal; congratulations on fulfilling the American Dream (for someone else)!

"Little do people realize, however, that that is the exact goal of capitalism, a survival of the fittest belief that the more successful of the two businesses can drive the other out. Therefore: WALMART EPITOMIZES THE AMERICAN DREAM."

That's exactly the problem. Contrary to your claim that people don't realize it--those of us who understand the pain Wal-Mart has inflicted across America realize that, at the root, it is capitalism and the "American Dream" (also known as the American Nightmare) which is responsible for it.

"Secondly, it does wonders for the economy by providing work for 1.3 million Americans across the country and, contrary to popular belief, the full-time employers are paid a livable wage with benefits."

When you put other stores out of business and put millions more out of work, hiring back a fraction of them does not "do wonders for the economy", especially when they work for peanuts in an environment where nobody cares about their needs and they have no right to unionize. Of course "the full-time employees" (I think you meant "employees", not "employers") are paid a livable wage with benefits--that is the definition of "full-time employee". But how many Wal-Mart employees are offered full-time work? Your rhetoric here is dangerously, and perhaps intentionally, misleading: the "popular belief" (which is true) is that Wal-Mart employees are generally not paid a living wage with benefits, and you invoke this idea before actually challenging another idea entirely, which is only about the full-time employees.

"Thirdly, they do a lot of community development across the country (remember how much they donated to victims of Katrina only a few years ago?)"

"A lot of community development" is a fraction of the pain and suffering they cause in every community they open a store in. This is how capitalist systems, whether governments or megacorporations, survive--they cause pain and suffering, steal everyone's money (directly or indirectly) and then give a portion of it back and congratulate themselves for being such good conscientious corporate citizens. And no, I don't remember how much they donated to victims of Katrina only a few years ago, but it was probably a drop in the bucket compared to how much money they make nickel-and-diming the world.

"Where in the ‘exact goals of Capitalism’ does preferential treatment like tax subsidies fit?"

Centrally, it turns out. The same owners who argue for "the free market" want the government to pour money on them, while opposing government aid for their workers and the poor (generally an overlapping group). This is neoliberalism for you--wallow in corporate welfare and then argue for "the free market" in public to galvanize popular support against the people's welfare.

it's the biggest and a giant company.

biggest in the world.