Blanca M. sent in this picture she took here in Las Vegas of a truck advertising Air Conditioning Technical Institute. The truck says “Hot City, Cool Career,” and then had this image on the side. 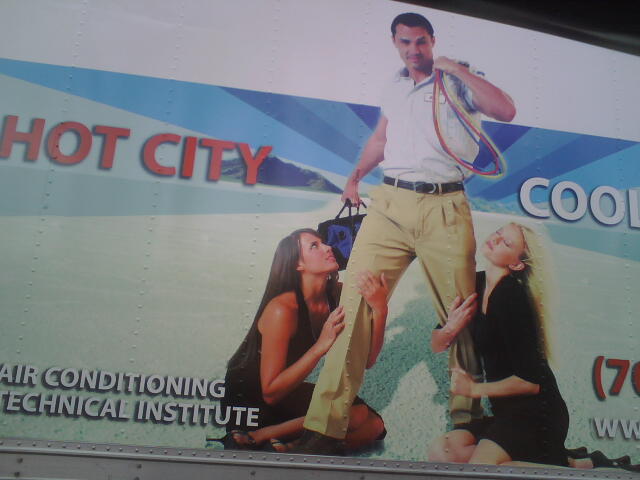 When you go to the website, you see a video (which I can’t embed, sorry) of a man driving up to a house in a sports car. A blonde woman comes out and gushes over the car. The man then says “Six months ago she wouldn’t have given me a second look. I had no job, no education, I was living with my parents.”

So apparently air conditioning tech school is appropriate only for men, and guarantees that you will make enough money to get the hot women you’ve always wanted. Aside from the clear objectification of women as sexual rewards for men, it reinforces the idea of women as opportunistic gold-diggers. It’s also an interesting perspective on how men should view relationships–that they should be perfectly happy to be with women who don’t like them for who they are, and who would presumably leave them if they lost their job or got a pay cut. As long as the woman’s hot, a guy is apparently supposed to be satisfied with the relationship and not worry about little things like whether his wife actually loves him–we reserve concerns about love and emotional closeness for women only.

[...] offered as (less explicit) rewards to men, see this post about Tag, a Dell Computer ad, and an Air Conditioning Technical Institute van. I was going to post links to posts about the presumption that gamers are male, but there were so [...]

There are a famous game where people like to go to enjoying there free time, they can be impressed by magnificent moment at spider solitaire online and make their time to special.