This commercial I recently saw on Comedy Central for Progene male enhancement supplement warns men who are “not 20 anymore” that, without their product, they won’t be able to satisfy a woman.

Here’s a screenshot of a graph from the video which purports to show how men’s sexual performance declines with age: 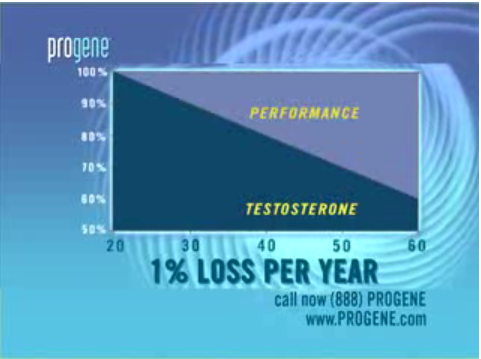 Obviously you could could use this for a discussion of the increasing scrutiny men’s bodies are put under (much as women’s long have). But it’s also a good example of the way sex is often discussed; the implication here is that the only way to satisfy a woman sexually is to be able to have sex like a 20-year-old man, and the emphasis is clearly on penile-vaginal intercourse as the main source of sexual pleasure (though it does come with the handy DVD about the female orgasm). I might also use it when I talk about the ways we construct biology and treat some “natural” processes as inevitable and unalterable while attempting to change others.

For the unbelievers, I know this ad may very well look fake, but I swear to you I saw it on TV. Multiple times, because it was during a show I’d recorded, so I had the opportunity to rewatch it to my heart’s content.

you could also use it as a way to show how statistics and graphs are grossly misused. just because there's a graph, doesn't mean there is actually any information on it. sociology has to be very concerned with how to interpret data and how to present numbers persuasively. this definitely does not.

This graph is wrong on so many levels, I wouldn't even know where to start... I wonder if the whole ad is fake, given the terrible job the model does, this incoherent graph, and the dumb product name.

good point rebecca. also note that what the graph shows is a complete fallacy. men reach A peak in testosterone at 18-21, not THE peak. testosterone levels in men actually increase steadily until roughly 60 years of age, where they taper off at varying rates dependent on the man's lifestyle and previous level of physical fitness.