Light-Skinned Woman Get in Free to Club

I am writing a lecture about the social construction of race/ethnicity and wanted to show some pictures of people who are grouped into a single racial category in the U.S. but, in fact, show enormous variety in their skin tone, facial features, etc., so I quickly googled the phrase “African American skin tone.” And I found this flyer for a party at a club where light-skinned women would get in free ( found here): 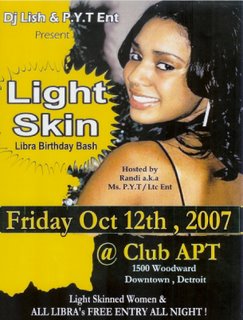 My reactions, in order: “What the f**k???” “This is clearly made up.” [After finding this AP story about it]: “Son of a bitch! It’s real!” Due to the outcry, the event was canceled and the event planner expressed sorrow and dismay that he would have offended anyone. Because who could have guessed this would be problematic?

This image should be perfect for illustrating a number of topics, such as the way hierarchies often emerge within racial groups based on skin tone, facial features, etc., so that racial discrimination does not just occur between different groups, or the way that light skin is still prized in our society, even in racial/ethnic minority populations. You could also focus on the gender angle and compare it to photos of African American women who are often “whitened” or required to have light skin tone in order to be models, actresses, etc. (for example, see this post), or the whole issue of why clubs allow women, but not men, in for free.

I’m going to pair this image with Margaret Hunter’s article “Light, Bright, and Almost White: The Advantages and Disadvantages of Light Skin” (from Skin/Deep: How Race and Complexion Matter in the ‘Color-Blind’ Era, 2004).

Sadly but maybe If all humans looked equal except for the color of they eyebrows we'd still be segregating each other.

In fact somebody told me there's an Star Trek episode which plays on this idea.

I recall seeing that flyer and the drama it caused. Either the same group or another also had a bring a white girl to the club day.
There are always groups who stick to the eurocentric ideals of the closer to white the skin is the better.

[...] in the U.S. but, in fact, show enormous variety in their skin tone, facial features, etc., sohttp://thesocietypages.org/socimages/2008/08/25/light-skinned-women-get-in-free-to-club/Uganda: Is Morris The Next Showbiz Prince? - AllAfrica.comHis is one of the faces that stares down [...]

[...] Whites, and that non-Whites may apply those beauty standards among themselves (for example, see this post about an African American club promoter who planned a party to which light-skinned girls would get [...]

STOP HATTING WATS DA BIG DEAL!IM YELLA AND IT SEEMS LIKE DARK SKIN WOMEN ALWAYS ENVY US LIGHT SKIN WOMEN.WHEN WILL PEOPLE UNDESTAND IT AINT DA COLOR ITS THE INSIDE WAT COUNT.NOBODY WOULD BE COMPLAINING IF IT WAS A CHOCOLATE GURL PROMOTION.EVERY BODY NEED TO GET OFF DAT MAN N***S