Here’s another great one from Elizabeth over at Blog of Stench (image originally found at Ad*Access):

Send for a FREE BOOK telling about this grave womanly offense. Learn how no other type liquid antiseptic-germicide tested for the douche is so powerful yet harmless! Isn’t it a shame when a woman doesn’t realize how important it is to always put ZONITE in her fountain syringe? Failure to practice hygiene (internal cleanliness) often results in such needless tragedies–homes broken up, few social invitations, the feeling of being shunned without without knowing why. A modern woman realizes how important hygiene is to health, married happiness, after her periods, and to combat an offensive odor even greater than bad breath or body odor–an odor she herself may not detect but is so apparent to people around her. And isn’t it reassuring to know that NO OTHER TYPE LIQUID ANTISEPTIC-GERMICIDE TESTED FOR THE DOUCHE IS SO POWERFUL YET SAFE TO TISSUES AS ZONITE! Developed by a famous surgeon and scientist–the ZONITE principle was the first in the world to be so powerfully effective yet so harmless. ZONITE is positively non-poisonous, non-irritating, non-burning. Remember that ZONITE is SAFE! SAFE! SAFE! to the most delicate tissues. You can use ZONITE as directed as often as needed without the slightest risk of injury. ZONITE deoderizes by not ‘masking’–it actually destroys, dissolves and removes odor-causing waste substances. And ZONITE has such a soothing effect. It promptly relieves any itching or irritation if present. ZONITE gives BOTH internal and external protection, leaving one with such a refreshed, dainty feeling–so c-l-e-a-n! Complete douching directions come with every bottle. Buy ZONITE today! Get it at any drugstore.

So women who don’t douche face, as Elizabeth says, “sexless marriages, social ostracism and general disaster.” I like how horrified the woman in the ad looks now that she’s figured out the cause of all her problems. On a side note, I think this is the only instance I’ve ever seen of a man being referred to as “frigid.”

Here’s another Zonite ad that I found at the Museum of Menstruation (who knew such a thing existed?):

I’m too lazy to transcribe the full text, but it’s basically the same story–if only she’d known about Zonite, she wouldn’t have suffered such social humiliations (and notice the scowl on the woman’s face).

These will be great for illustrating the ways women were (and still are) told they need to douche regularly or they would smell bad, as well as to have a healthy vagina–although the douches themselves often destroyed normal, healthy vaginal bacteria, causing the problems they claimed to solve. I’m going to use these in my women’s studies course in conjunction with our discussion of Joan Jacobs Brumberg’s book The Body Project, which discusses the rise of the feminine hygiene industry and the increases pressure on women to keep more and more parts of their bodies under control, whether through sanitary pads, bras, or anti-acne products.

In the comments, Abby says,

This also ties into lessons about contraceptive history.  Andrea Tone has written about how Lysol (yes, that Lysol) and Zonite were ostensibly marketed as douches for “freshness” but were understood to be useful for preventing pregnancy.  If I recall correctly the main era for this was the 1930s, when most contraceptives were illegal.  There is a double meaning when these ads say that women can “banish their fears” – not just odor, but also unwanted pregnancy. (Never mind that douching with these chemicals is NOT healthy!)

As an example, Holly Mac. sent in this ad for a Lysol douche:

A man maries a woman because he loves her. So instead of blaming him if married love begins to cool, she should question herself. Is she truly trying to keep her husband and herself eager, happy married lovers? On most effective way to safeguard her dainty feminine allure is by practicing complete feminine hygiene as provided by vaginal douches with a scientifically correct preparation like ‘Lysol.’ So easy a way to banish the misgivings that often keep married lovers apart.

‘Lysol’ has amazing, proved power to kill germ-life on contact . . . truly cleanses the vaginal canal even in the presence of mucous matter. Thus ‘Lysol’ acts in a way that makeshifts like soap, salt or soda never can.

Appealing daintines is assured, because the very source of objectional odors is eliminated.

Yet gentle, non-caustic ‘Lysol’ will not harm delicate tissue. Simple directions give correct douching solution. Many doctors advise their patients to douche regularly with ‘Lysol’ brand disinfectant, just to insure feminine daintiness alone, and to use it as often as necessary. No greasy aftereffect.

For feminine hygiene, three times more women use ‘Lysol’ than any other liquid preparation. No other is more reliable. You, too, can rely on ‘Lysol’ to help protect your married happiness . . . keep you desirable!

Notice the way in which “feminine allure” is described as “fragile.” I guess just a few years ago that relentless male sex drive was believed to be easily interrupted!

Also note the threat of divorce (and likely economic ruin) and the use of “science” to sell this product.

Ben O. sent in a link to several ads for douches and feminine deodorants (all at Found in Mom’s Basement). This douche ad makes it clear that douching is about pleasing your male partner: 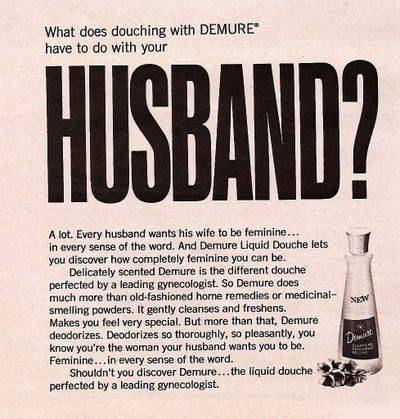 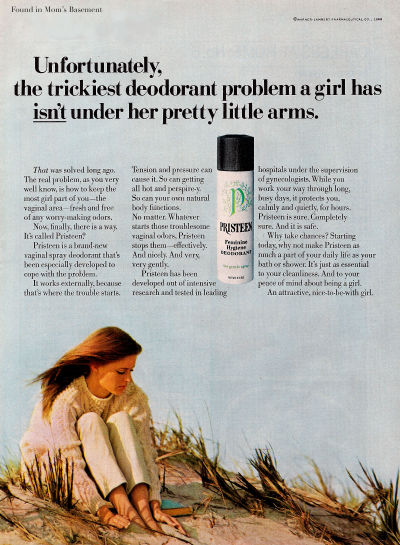 The real problem, as you very well know, is how to keep the most girl part of you–the vaginal area–fresh and free of any worry-making odors…Whatever starts those those troublesome vaginal odors, Pristeen stops them–effectively. And nicely…Why take chances? Starting today, why not make Pristeen as much a part of your daily life as your bath or shower. It’s just as essential to your cleanliness. And to your peace of mind about being a girl. An attractive, nice-to-be-with girl. 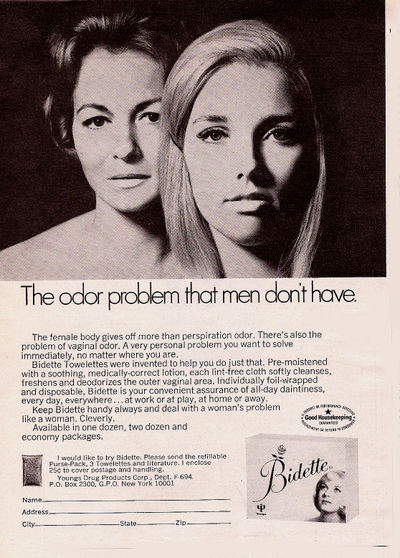 Kim D. sent us in another example, found at the Museum of Menstruation:

NEW! Taylor D. sent in a link to eleven more vintage Lysol douche ads, including this one: 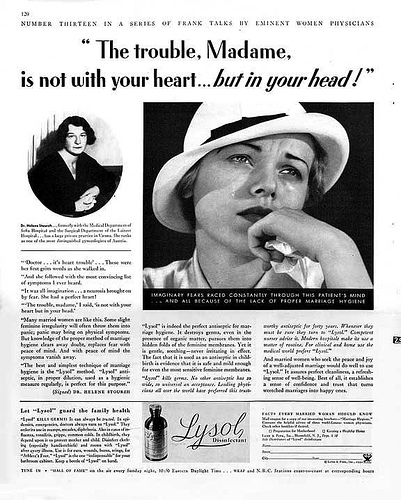 This also ties into lessons about contraceptive history. Andrea Tone has written about how Lysol (yes, that Lysol) and Zonite were ostensibly marketed as douches for "freshness" but were understood to be useful for preventing pregnancy. If I recall correctly the main era for this was the 1930s, when most contraceptives were illegal. There is a double meaning when these ads say that women can "banish their fears" - not just odor, but also unwanted pregnancy. (Never mind that douching with these chemicals is NOT healthy!)

I have seriously never heard of this idea. Evidently this is not such a frank age as 1925!

I have often wondered how women managed menstruation in earlier ages (I've heard the theory expressed that "they were just always pregnant", but that cannot be universally true) and different civilisations, but it's just about the one remaining taboo subject.

God that ad's kinda creepy! But anyway I think it wasn't until the 1920s or so that the FDA was developed and enforced. So before that, products were advertised and sold without any protocols on how consumers could know for sure what the chemical content of the products were, thus having no idea of side effects and such.

Like men don't have odor in the genital area? I seriously doubt men were diligently cleaning to make sure their wife didn't have to deal with "unpleasant" odors down there -- to keep her from being "frigid" and so forth. And even if she were, she'd be admonished about her responsibility to him etc etc.

[...] Related to discomfort with women’s genitalia, Taylor D. sent in a link to even more vintage ads for Lysol as a douche, which we added to this post. [...]

LadyNews » Blog Archive » Calling it a “va-jay-jay” is being frank and honest? - Information in bite-sized pieces for the feeble ladybrain — September 15, 2011

[...] know if it was talked about or not (given that I wasn’t alive), but there are a fuckload of vintage douche ads that suggest we have always been pretty preoccupied with touting this stuff to women. Vag shame [...]

Yea, would you wash that thing for Christ's sake?  Then, I won't have to be grabbing my overcoat and going out to the bar every night just to get away from that stench.

Actually, these ads were probably written by gay dudes trying to justify their repulsion of vaginas.  A real man appreciates the smell of a real woman.

[…] a scanned version (in worse condition, but certainly readable) that you can see here. I also found an amusing look at other vintage feminine hygiene […]