“I’m Saving the Planet. What are You Doing?”

The ever-awesome Elizabeth, of Blog of Stench, sent in this image of a reusable shopping bag (found here):

For another example of environmentalism as fashion statement, see this post.

Zach W. sent in this Mini Cooper ad (found here) that talks about the car’s “carfun footprint,” which is “a measure of how fun your car is versus how much impact it has on the environment”: 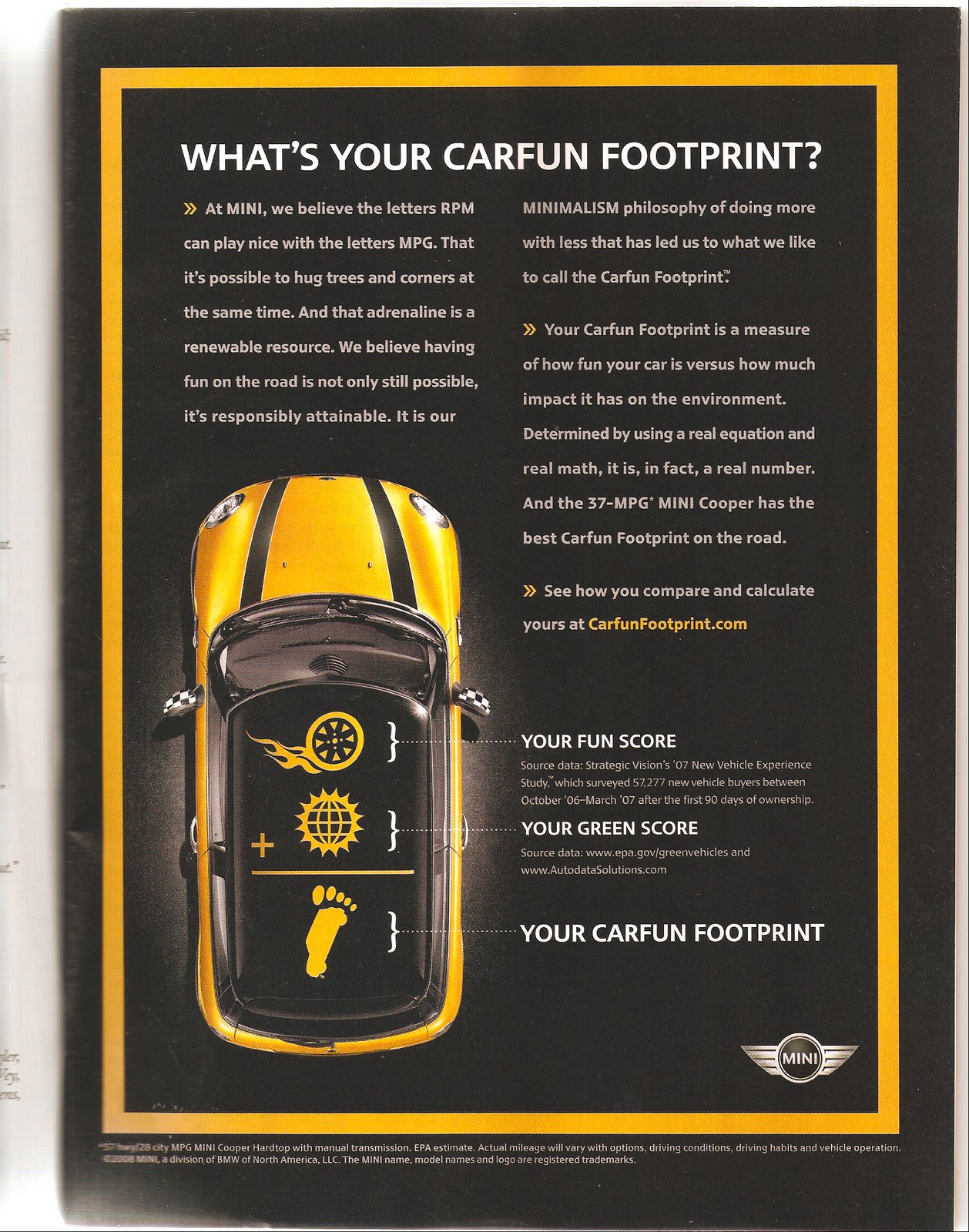 Clearly it’s awesome if car manufacturers are realizing they actually have to address the environmental aspects of their cars, but what grabbed my attention is that in the main text it says the Mini gets 37 mpg, but when you read the fine print at the bottom, you find out that in town it’s 28 mpg, and that’s the hard-top manual transmission Mini. According to this article, the convertible gets 30-32 mpg on the highway, and Yahoo’s autos page shows them getting in the low-20s per gallon in-town. As a Honda Civic driver, that doesn’t strike me as much to brag about, really. I mean, ok, yes, better than the Mercury my grandma bought last year, but still. (Note: I think my grandma is the last person on earth to buy a Mercury.) 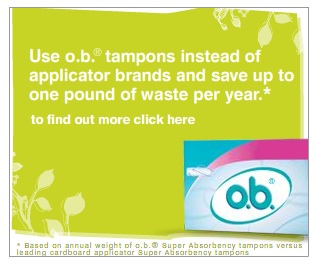 I think when even tampons are being advertised as environmentally-friendly, we can safely say that the idea of being eco-conscious is becoming fairly mainstream (though that, of course, means little about how people actually act).

lol yea its generally a consumerist yuppy who gets on such bandwagons as the current campaign to demonize shopping bags.
the same folk don't seem to know that just driving a few miles is basically the equivalent of a years supplies of bags in energy already. never mind their vacations abroad and such. its a kind of self righteousness that is really full of baloney.

I have a bag somewhat like that. It was a gift a few years ago, is canvas, and says something like, "I'm doing my part. Are you?"

I hate the text. I use it inside out a lot, but I can't bring myself to get rid of it because it's a nice bag and what I'm trying to avoid the quick consume-and-dump mentality. I think I'll sew something over it.

It's not the energy or carbon footprint, it's that plastic bags take an awful lot of time to disintegrate in landfills or float on the surface of the sea... forever, or almost. Right now there is a mass of plastics twice the size of the US floating on the Pacific.

I've got canvas bags that I use everyday to carry my lunch to work, and I reuse plastic supermarket bags as much as I can. But yeah...

I expected to see a lot of copycats in the wake of the UK fad for Anya Hindmarsh "I'm not a plastic bag" totes (there was an earlier post about those here). But so far, I haven't. But now every single supermarket here has its own reusable "Bags for Life" - even the budget ones - and some have started charging for flimsy plastic ones.

I have noted that there's an increase in non-supermarket shop staff asking you if you want a bag, which they probably wouldn't have done a couple of years ago.

We were sent a freebie bag from a charity which was trying to persuade us to give money (this trend might be worth a post on its own) and like Chris, we don't want to throw it out because it's a good sturdy bag, and it would be wasteful. But we don't really want to walk around advertising this charity to which we did not, in fact, donate. Also, it has tacky photos of puppies on it.

I think fred raises - maybe by accident - an interesting point about middle-class consumerist guilt. My husband and I don't have a car and live as lightly as we can, yet we feel very guilty whenever we book a flight. We haven't been abroad in some years because of that. I have a suspicion that the real rich don't worry about the small stuff because they can afford to offset carbon if they want, and the less-affluent don't worry about it because they have more immediate concerns.

Is this a British (class-ridden society) thing, or is it the same in the US? The hybrid-car fad seems to be a middle-income thing; look, we're green, and we also save money on fuel!

Yeah, get a hybrid, recycle, and use canvas tote bags. The impending global eco-Hell has now been averted. Whew, that was close!

We're so far past the point where these gestures would do any good (other than assuage self-imposed guilt) that it's not even funny anymore. Click that link posted above by Elena or do a search on "North Pacific Gyre" to get an idea of the scale of this problem.

Once solar UV radiation has broken down the plastic in the ocean to the point where its buoyancy diminishes, the plastic sinks just deep enough to prevent any further photodegradation and so there it stays, indefinitely.

Sociological Images » Should Marketing Principles Be Applied to Disease? — May 19, 2009

[...] discussed the commodification of activism extensively (see here, here, here, here, and here) and s0 I’m going to skip this point.  Instead, I’d like the ask the [...]

If you have to flaunt your environmentalism, it's probably because it's unnatural for you. Same with anything, correct? ex) If I have to tell people that I'm smart/pretty/strong/rich/nice/whatever, I'm probably not.