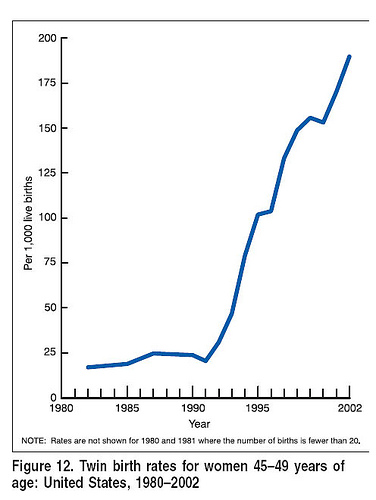 On the radio a couple weeks ago I heard a report that Boston and the surrounding suburbs have the highest rates of multiple births in the country. The DJ then speculated the reason why is because of the number of hospitals in Boston and all the fertility said hospitals "create."

I'm a fan of having babies the old fashioned way: vagina and penis. If that doesn't work adopt or foster. Creating babies through drugs is selfish and detrimental to the fetus/baby and mother.

Here's also something to consider: later age for first births. While all eyes seem to be on teenage pregnancies, the obverse trend also exists among some sections of society. Women, for a variety of reasons, postpone their first child. It could be to promote their careers, or it could be because of what some have called the infantilization of adults - people just want to stretch out their teen years deep into their 30's. As a result, when people DO start wanting babies, they have a much harder time at it, and many get into long fertility treatments. If they decide they want more than one kid, they're even more likely to push their reproductive period into their later 40's, which requires even more fertility treatments, with higher chances of multiple births.

Which raises an interesting cohort question - we're talking about women who entered their 20's during the 80's. Is this description still true for women entering their 20's in the last decade? There have been many changes in the way we perceive feminism during this period, and the so-called "mommy wars" are only one manifestation of them.
This may lead to a reversal of the trend we see in this graph over the next 2 decades.

MMM :
i kind of agree with you that people should adopt or foster kids due to the need for parents and the rising world population, but i don't see why you should privilege heterosexual couples with working reproductive systems. the desire for genetic offspring is pretty universal. i'd like to see more couples adopt or foster children instead, but i don't think this responsibility falls entirely on those that can't reproduce in the traditional manner.

There are high (and increasing) levels of peculiar molecules circulating in our environment these days, and many are potent hormones (birth control pills) or mimic potent hormones (pesticides) when they get inside us. Some remain in the water after leaving sewage treatment plants, and many cities (especially in the West) recycle it back into the drinking water supply. Yum! There are thousands of novel compounds out there these days, and although that's a complicated enough context for unraveling links between pollution and physiological effects, it's much harder than that since many combine in the environment to form unprecedented and unique compounds whose effects on us are a complete mystery.

Although unconnected with the fertility treatment trend (except for the hormones used in the treatments being flushed into the sewer of course; gee thanks), these two factors combined probably explain the steep increase in twin births. The pollutants might be connected to the steep rise in autism rates as well. And Alzheimer's. And some types of cancer. Each seems to be rising close to (or actually) exponentially, which is not the way incident rates of a disease or condition increase if genetics was the primary cause.

Anyway, I personally can't understand the appeal of fertility treatments from the consumer's point of view; they're really profitable so I understand the provider's point of view well enough, but to me they're in the same category as elective plastic surgery but with consequences for the rest of us (hormones in the drinking water). The actual baby is incidental to the process; it's about getting what we want and it's pretty funny in a sad kind of way to see nature throwing curve balls at our hubris again and again... Nature? Ha! We've conquered nature and uncovered all its Hidden Variables! My personal desires reign supreme if I can afford to pay for them! I love my sextuplets!

Village Idiot, any of those couples you know with twins in their late 40's?

"Peculiar molecules"? Condemning birth control pills as dangerous toxins that are causing harm to "the rest of us" via drinking water pollution... seriously? You give people who actually study environmental toxicology a bad name.

"Anonymous:" By 'peculiar' I just meant unusual, which is what the word means, you know. These compounds are very unusual, at least in rivers and lakes and municipal water supplies. Of course, if they are common then they're not particularly unusual but they only become common if the sources aren't identified and remedied.

The following comes from an article published at http://jscms.jrn.columbia.edu/cns/2008-02-19/cupido-birthcontrol

"Dr. David Norris, a physiology professor at the University of Colorado, said it is not just the possible negative effects that estrogen is having on aquatic environments that concerns him as much as the exposure of these hormones to humans, especially fetuses and newborns. According to Norris, numerous reports show that estrogenic chemicals in water can result in thyroid problems and an adrenaline imbalance. Thyroid inhibitors are of major concern because they affect the nervous system’s development and can cause permanent mental retardation.

Although Norris points out that certain foods, plastics, cosmetics, personal-care products and animal wastes are also causing water contamination, studies in Boulder Creek, Colo., have shown that fish are about 10 times more sensitive to the contribution of estrogen from birth control pills than they are to estradiol, the type of natural estrogen excreted by animals like cows."

I called birth control pills potent hormones, not "dangerous toxins" and frankly, nanogram for nanogram, hormones tend to have more of an effect on human and animal physiology than many classic toxins such as pesticides residues. It's the estrogens and estrogen-mimicking molecules that are making trout hermaphroditic, for example, not the heavy metals or oil spills.

Many molecules that are beneficial in at one dosage or within one context act as de facto toxins at a different dosage or within a different context, and the nature of many municipal water systems allows some of these compounds to increase in concentration over time. In Los Angeles, the water coming out of the tap has on average been recycled through the local treatment system more than 8 times. If hormones are not removed, and as of yet they aren't, then their concentration increases with each pass.

Environmental toxicology is way behind the curve at this point, in large measure due to inadequate funding of what should be a top priority, but also due to the fact that there is almost no way to keep up with the possible combinations and permutations of all the chemicals present in water these days. There are new, novel chemical compounds created in industrial and research labs every day and many thousands of these man-made molecules are already circulating in the environment; some are very persistent. Many have been found to be occasionally recombining into molecules that have never been described or studied before (this includes their possible health effects), which greatly complicates the situation even more than it already is.

(You, "anon," give people who actually read and understand what was written before writing a response a bad name)