For “Normal to Darker Skin” 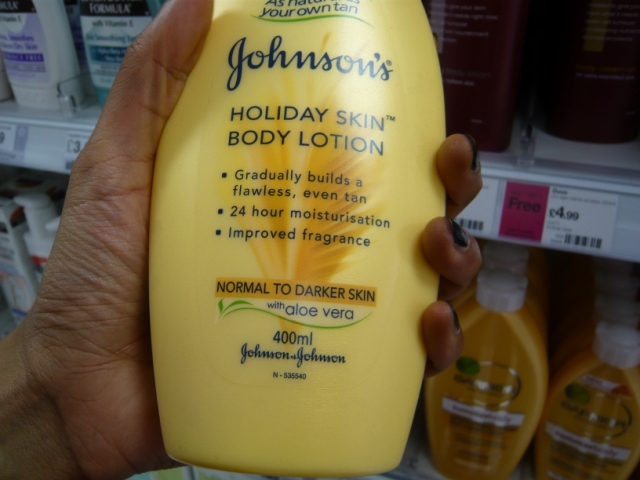 Can’t make this stuff up.  See also this post on white privilege.

It looks like Great Britain from the product labels, but wow...

Is it very hard to write light, instead of normal? The concept of white/light being good and black/dark being bad has a lot to do with normal and deviant.

Hate to contradict, but doesn't this actually imply that "normal" is somewhere in the middle between dark and light? Because they should have a corresponding product that goes "normal to lighter skin" in the opposite direction. If this bottle is meant to cover lighter to darker skin, then why would they label it at all? That would be pretty much the whole spectrum.

First, I am appalled at what is "normal." However, doesn't it seem maybe a little ironic to be talking about white skin as "normal" skin when men and women are buying products that make their skin darker? Things like this make it clear that being white or "normal" doesn't have much to do with skin color.

Memo to Johnson & Johnson: "Normal" isn't a color, or a shade of any color. It's also not the opposite of "dark" or "light."

I think the word we'd usually see used in this context in the US is "medium." Not nearly so loaded; probably still not ideal, though.

Will; isn't it just as ridiculous to assume that 'normal' means a skin-tone between dark and white? The point is that no skin tone is 'normal'. As silly as phrases like 'healthy tan'.

Besides, 'normal' doesn't actually even tell you what type/level of tan you'd be getting; I thought products like these would used more descriptive (and still perhaps problematic) terms like 'golden', 'beige', 'bronzed', 'espresso', etc.

All the phrase actually does is highlight what Johnson&Johnson consider to be abnormal.

Maybe it just means "normal" to the untanned skin of the user (without specifying color). My body has skin that is lighter and darker in places, and yet there is a "norm" or perhaps I should say "standard" that is neither hidden from the sun (my rear) or over exposed to sun (my driver arm). Like, say, my face. Those whose skin is darker than even my darkest skin also have gradations, and therefore a "norm."

Just something to think about.

lisa, Dannger, Liz, Lauren, everyone. This is the thought police speaking. We are off-duty today, so will everyone please chill out?

Will in the comment above nailed it. In an admittedly bad choice of words, J&J just meant that normal is somewhere between light and dark.

The brits must be less PC than y'all. Good for them. By the way, in Israeli academic society, people freely refer to black people as "black" and to homosexuals as "homosexual" or "homo". It's only bigotry if people are bigots. All PC does is to make people keep their bigotry on the inside. Try asking some black people, in the enlightened American society, if they find it easy to hail a cab.

Will is right in his assumption: there is a version labelled "fair to normal skin". It's on my bathroom shelf. The bottles of the two versions are an identical primrose yellow; only the band is slightly darker on the version in the photo (and it's similar enough to cause confusion).

Speaking as a Brit, I wouldn't say we're necessarily less PC, but outside of London the country is vastly less multicultural than the US appears to be. It may be that the product developers at Johnson and Johnson simply haven't considered that anyone who isn't white would want to buy a tanning product. (And I'm not sure - speaking as a white woman, and therefore fairly ignorant - whether they would. Acquaintances who have a southern Asian background have complained that by their parents' standards, lighter skin is considered more beautiful.)

I would agree it's a bad choice of words, but I'm not sure what to propose as a better one. I wouldn't have selected "fair"; I usually describe myself as "pale", but maybe that's not ad-speak.

The "fair to normal" version does not exactly produce a dramatic colour change. Despite this, the product was often hailed as a bestseller in the UK press last summer.

normal, as is your own normal skin tone. the tone you have right now. not generally, the product is not trying to group together a certain "acceptable" skin tone. it is saying it will make whatever your current skin tone is darker if you use it.

Stunning Example of the Neutrality of Whiteness » Sociological Images — November 30, 2009

i think this one just means YOUR normal skin tone to a darker skin tone in respects to the person, personally, who is using the product..

The Many Controversies of Beyoncé Knowles « Baking With Ex Mix — May 7, 2011

[...] dress” coverage here and here. (Still don’t believe me that this is a thing? Go buy this Johnson’s lotion for “normal to darker [...]

Are we sure that this isn't designed to turn your skin tone from ITs "normal'' to a "darker" tone?

[...] uniform in tone and pigmentation, the standard of which being, of course, the-lighter-the-better (the beauty product description of “normal to dark skin”, dark skin being apparently abnormal; not to mention the use of skin lightening creams, which many [...]

I may be fair-skinned, but "normal?" C'mon Johnson & Johnson - Evolve.

Is there a hex color code for this "normal" you speak of??? I want to know if I qualify, or if I am too green

All of y'all need to chill out. Sure this may be offensive to some people but J&J means that if your let's say pale it will make you a shade or two darker. Or if your already pretty dark you will still get darker. It's your own skin tone, your own version of normal. But since we are human and therefore have our own opinions, everyone will find something that is "wrong" with anything. I can't blame y'all but maybe we could learn something from the Israeli Academic System. I'm not trying to be rude, but I am trying to tell the truth.