In a comment to another post, Umlud provided a link to this post from Thoughts from Kansas about the following joke allegedly told by John McCain in 1986 when speaking to the National League of Cities and Towns:

Did you hear the one about the woman who is attacked on the street by a gorilla, beaten senseless, raped repeatedly and left to die? When she finally regains consciousness and tries to speak, her doctor leans over to hear her sigh contently and to feebly ask, “Where is that marvelous ape?”

Here is an image of the original story about the incident in the Tucson Citizen (link to image found at Think Progress). I know it’s small and hard to read, but I wanted to provide the original source. 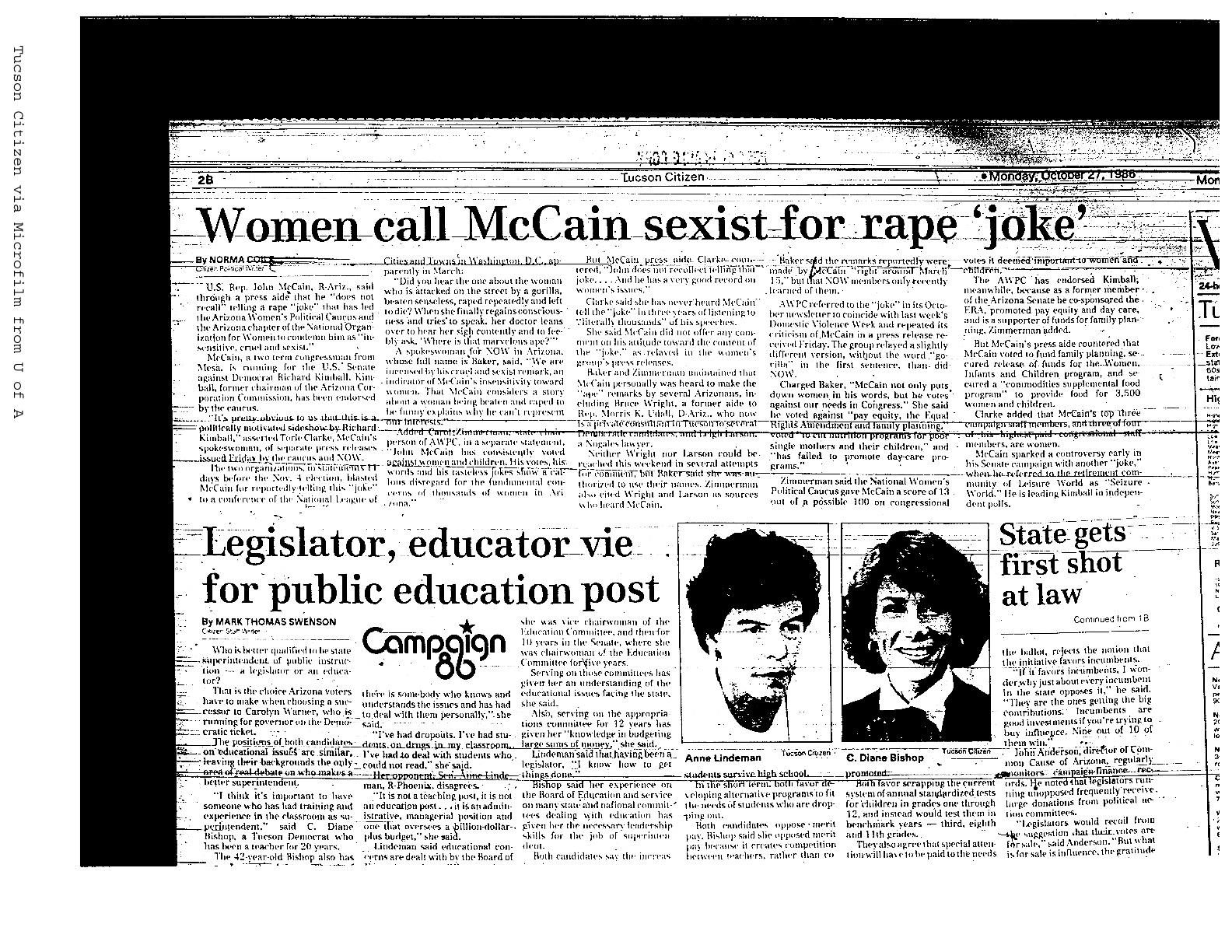 According to Think Progress,

McCain said he did not “recall” telling the joke. More recently, the McCain campaign scheduled a fundraiser with a Texas oilman who compared rape to the weather while running for governor. “As long as it’s inevitable, you might as well lie back and enjoy it,” said Clayton Williams in 1990. After public outcry, the event was “postponed.”

From what I recall, the comment by Williams was widely credited as a major reason Ann Richards won the gubernatorial campaign, becoming the second female governor of Texas.

Huh. I was looking up some information on Ann Richards really quick and discovered this list of the governors of Texas and discovered there have only been 6 Republican governors of Texas, and two of those were right after the Civil War, when the Republican party had quite a different platform and orientation. The other 4 have all been since 1979. And my home state of Oklahoma has only had 4. This shouldn’t be surprising, given that the Southern swing to the Republican party occurred mostly after the Civil Rights movement and Civil Rights legislation signed into law by President Lydon Johnson (who correctly predicted that the Democratic party would lose the South as a result of the policies), but it still surprised me.

Thanks for the link, Umlud!

“As long as it’s inevitable, you might as well lie back and enjoy it”

Uh, Senator? Senator McCain? May I inquire as to whether that approach is also advisable when you're stuck in a little bamboo cage for five years? I bet if they were asked, the Viet Cong would blame McCain's incarceration on the highly suggestive outfit he was wearing at the time (his U.S. military uniform). It's like he was asking for it.

By the way, that kind of experience screws people's heads up bad. There's no way he didn't suffer permanent damage from it, whether intellectually, emotionally, physically, or all of the above. It might be good for street-cred in DC, but he's not unique in having had such an experience.

And besides, on Faux News recently (6/24/08) he said "I really didn’t love America until I was deprived of her company." Say what?!? (it was edited out in subsequent broadcasts but is still on YouTube, of course).

funny you mention johnson, because his mouth was rather foul and i don't doubt he told such jokes or worse.