Conflating Modernity with the West

In this ad for Union Carbide is an excellent example of the dichotomization of “tradition” and “modernity” and the conflation of “modernity” with the West.  Text:

Oxen working the fields . . . the eternal river Ganges . . . jeweled elephants on parade.  Today these symbols of ancient India exist side by side with a new sight–modern industry.  India has developed bold new plans to build its economy and bring the promise of a bright future to its more than 400,000,000 poeple.  But India needs the technical knowledge of the western world.  For example, working with Indian engineers and technicians, Union Carbide recently made available its vast scientific resources to help build a major chemicals and plastics plant near Bombay.  Throughout the free world, Union Carbide has been actively engaged in building plants for the manufacture of chemicals, plastics, carbons, gases, and metals.  The people of Union Carbide welcome the opportunity to use their knowledge and sills in partnership with the citizens of so many great countries. 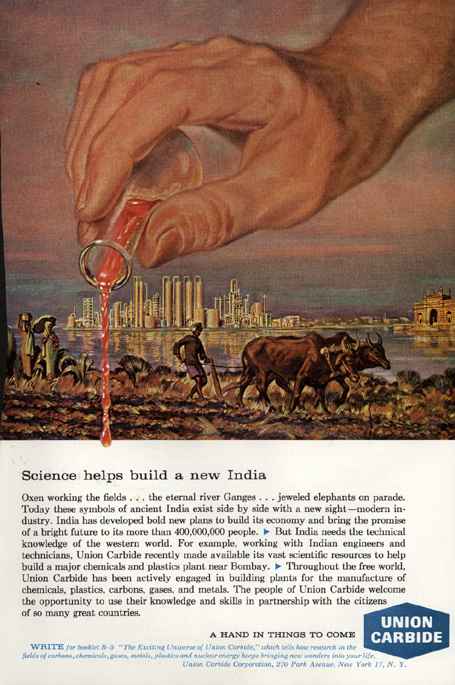 UPDATE:  In the comments, Village Idiot mentioned the imagery which I, ironically, lost sight of in favor of the text.  The great white hand (of God?) pouring what looks like blood out of a scientific beaker onto a scene of dark figures!  Wow!

Found at Vintage Ads thanks to Ben O.

Ah, Union Carbide. They did bring the full weight of modern industry to thousands of citizens of Bhopal...

That giant white hand of God dumping some unidentifiable chemical out of a really scientific-looking beaker is one of the most unsettling examples of prescience I've ever seen.

That's me with the Manifest Destiny image above... didn't mean to be anonymous...

Which Images Represent India? | Racialicious - the intersection of race and pop culture — November 30, 2009

Then I started employing the tool to make sweeping roughing cuts carbide blanks. I did experience a couple carbide blade for a regular blade and proceeded to cut 5mm 10 ply birch plywood, but I attribute that to my over agressiveness and lack of sufficient knowledge of this tool. The smoothness of the roughing cut tremendously reduced my outside sanding time.