Z from It’s The Thought That Counts sends us this figure showing the wage gap between various types of groups.  The point is to show that wage differentials are most extreme across countries, not within them.  In an article, Kerry Howley writes:

Wage gaps between observably identical Nigerian workers in the United States and Nigerian workers in Nigeria (same gender, education, work experience, etc) are… considerable. They swamp the wage gaps between men and women in the US. They swamp the gaps between whites and blacks in the US. Actually, they swamp the wage gaps between whites and blacks in the United States in 1855. For several countries, the effect of border restrictions on the wages of workers of equal productivity “is greater than any form of wage discrimination (gender, race, or ethnicity) that has ever been measured.” The labor protectionism that keeps poor workers out of rich countries upholds one of the largest remaining price distortions in any global market. 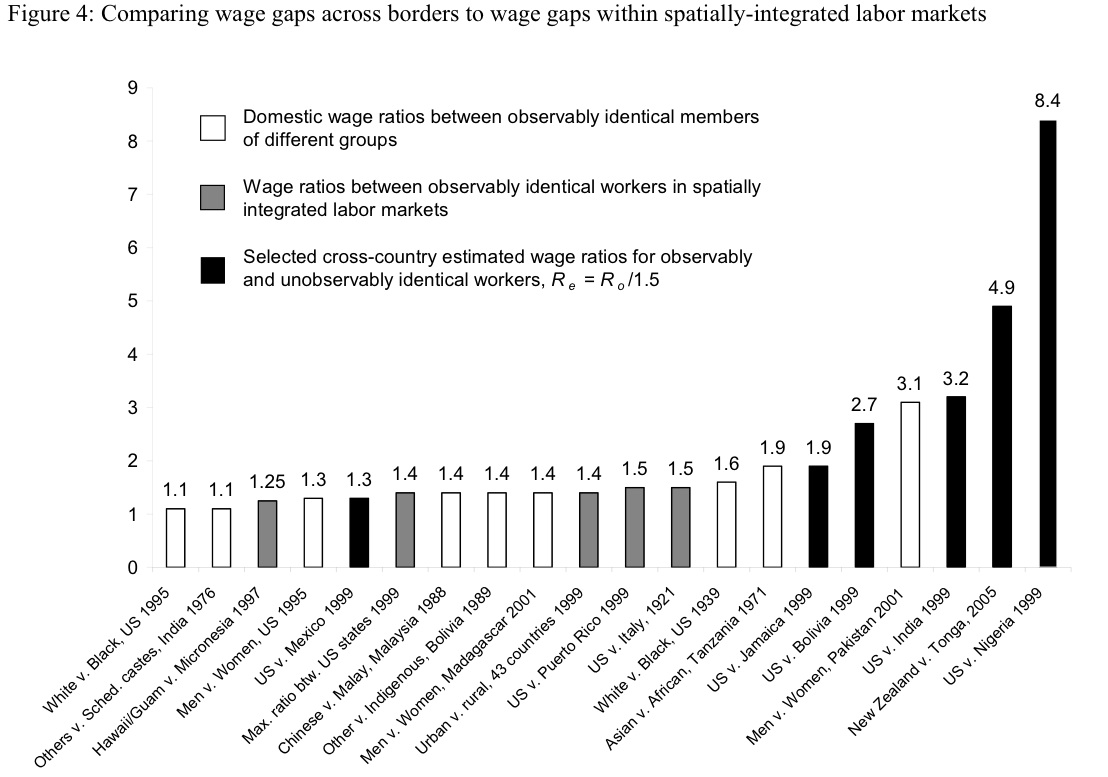 I find this information difficult to understand or use without also knowing the price of goods. My experience traveling internationally suggests that in some countries things are more expensive than others, so it seems like some kind of "standardized" wage (i.e. wage relative to the cost of living) would be more helpful for international comparisons. I know cost of living calculations are also somewhat flawed, but it's hard for me to agree that I'm overpaid in Switzerland when I turn around and find a pair of pants costs 3 to 4 times as much as in the US.

These differences are hardly a surprise but identifying labour protectionism as the solution to the problem is a little simplistic. Opening up labour markets is the fastest way to rob a developing country of their skilled workers which, particularly where health care is concerned, can greatly exacerbate problems for the source country.

I'm pretty tired of this sort of thing, frankly, such as being told that billions of people live on "less than $2 a day," whatever meaningless figure that is. For all I know, $2 (in what currency? A lot of places use "dollars") buys you a pretty good living in a lot of places. I also think newspaper reporters should be forbidden by professional practice codes into "translating" currencies by simply checking the exchange rate. Bzzzt! Not equivalent! Thanks for playing. Try our fun home game, "Economics for Complete Morons!"

The same thing goes for wage gaps. Yeah, someone in Nigeria makes a lot less money than I do. I still make 80 cents on the dollar compared to my opposite-sex and/or able-bodied counterpart. Not to be utterly self-centred about it, but guess which I care about more? Also, guess which I can actually do more about, being as I can (and do) vote here at home, and write letters to my elected representatives...