Susanne T. sent us this image of an ad at a busy stop at the University of Bremen, Germany (comments after the image).  Susanne translates the ad to read:

Kids are only well when mothers are well.  Her project ‘wellcome’ helps families to order the everyday chaos.  Strong women, strong country. 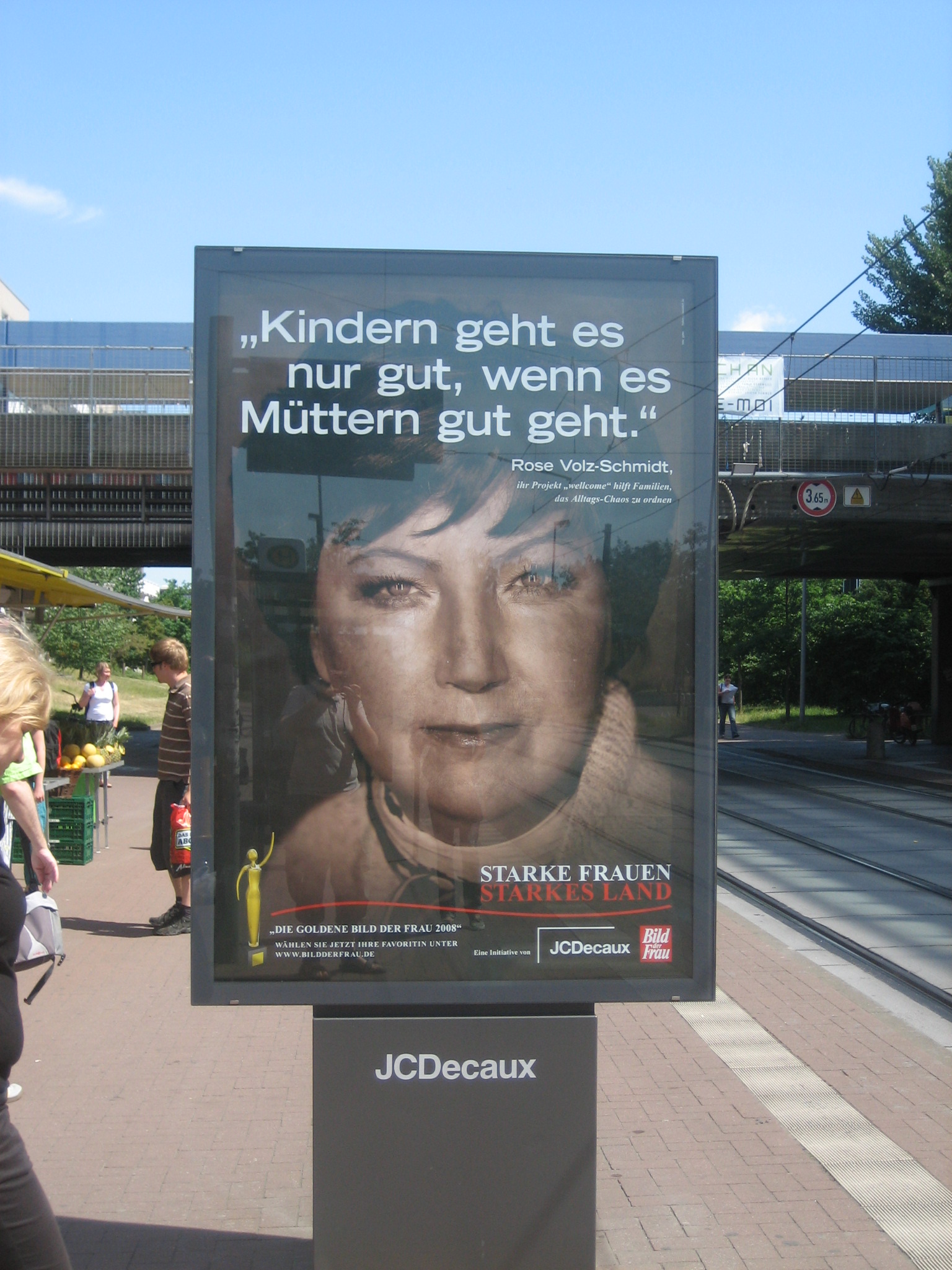 Feminist theorists note that there are two ways to integrate women into a society as equals to men: as citizen-workers (who perform the same tasks as men, namely breadwinning) or as citizen-mothers (who perform different tasks than men, namely parenting). If, and this is a big if, we truly valued parenting as much as we valued breadwinning, then the latter is a perfectly viable strategy with which to bring about a gender egalitarian society.

In the U.S., we conflate the idea of equality with gender sameness, assuming that any difference between men and women is a sign of oppression.  So, to many Americans, the fact that this ad makes fathers invisible and holds women alone responsible for parenting is problematic (as Susanne noted).  But different isn’t necessarily unequal and Germany (as well as France) has a tradition of supporting women as mothers.  By “supporting” I mean generous social policy that rewards women in concrete ways for reproducing the nation.

I’m not sure to what extent Germany still supports mothers with pro-natal policies.  Susanne’s critique may very well be more accurate than my comments about different ways of integrating women into the state.  However, I think it’s useful to problematize our assumptions about what equality would look like.  If women were truly valued for their unique contributions, that would be okay.  The problem in the U.S. is that we hold women responsible for childcare and also devalue that work.

Adding freedom to that equality, of course, means state support for both citizen-workers and citizen-parents (of both sexes) and equally valuing both contributions.

Also see this post on equating motherhood and military service in the Third Reich.

"Adding freedom to that equality, of course, means state support for both citizen-workers and citizen-parents (of both sexes) and equally valuing both contributions."

This is such an important point - and one that seems to be missed by singling out mothers (instead of parents of both sexes) as the key to keeping kids well. But for all I know this ad is part of a series that also features fathers and female and male workers as equally valuable members of the nation.

I think the german attitude is similar to the 'seperate but equal' policy line, and is as un-equal.
gender equality, for me, is not about recieving the same amount of resources as someone from a different gender; it's about my gender not dictating the decisions I am able to take.
I want to be a participating parent; I want to take a meaningful part in the lives of my children. Why should this option be taken away from me simply because I'm a man?

From the website, it seems geared towards volunteers helping (at least temporarily) families with problems. Also, they use "Eltern" (parents) rather than "Mutter" (mother/s).

(Google translation of the "Die Vision" page with some adjustements): ""It takes a whole village to raise a child" says an African proverb. wellcome will contribute to a society in which children are welcome. This includes responsibility and there to help where help is not. Children need time. Parents alone are often overwhelmed. Some problematic biography has its roots in these early borderline. We imagine that it is particularly in transitional and emergency support from the community. A family-friendly neighborhood, supported by civic engagement of all - that is our vision.

We found nationwide wellcome teams in order to reach as many parents to be. We think intensively about how we socially disadvantaged families even more support. The practical assistance by wellcome and networking at local and national level is important to us. Who will initiate social change, but the causes of the problems addressed. That is why wellcome from his perspective and due to the varied experiences of young parents to talk issues, the parents."

hey there... just to add some insight information (and i'm sory if it's too long, but i couldn't help): The add is part of a series featuring women that are nominated for or won an award promoted by a conservative, traditional german women's magazine (that means recipies and diet advice). Those "strong women" do - in the eyes of the jury - good for their communities, as for example Rose Volz-Schmidt, who we see on the add. She is the founder of the organization Elena linked to.

German family policis have changed over time, from a very mother-based approach to a more parents-based one. Since the 1980s, paid paternal leave is granted to mothers and fathers, altough very few fathers took the opportunity. Sine 2007, there is a new policy called "Elterngeld". The time that parents leave their jobs is shorter now, and parents should both take some time off their jobs (at least 2 month, or the familie won't get the full 14 month paid parental leave). The money that a parent gets depends on their last income: you get more if you're income was higher.

that means, the family politics is tending towards the "state support for both citizen-workers and citizen-parents (of both sexes) and equally valuing both contributions" approach, but with a class bias. fathers and mothers are treated equally, and it is an incentive for mothers to go back to their jobs sooner, and for fathers to stay with their kids. there is, however, a pronatalist aspect the new policy was implemented to raise birth rates, especially in economically better situtated families.

on the "If women were truly valued for their unique contributions, that would be okay." statement, I think that nadav is right. the different but equal approach did not work very well in german family politics, as women, after all, have no indenpendent income and therefor not the same financial security as men have.

the different but equal approach did not work very well in german family politics, as women, after all, have no indenpendent income and therefor not the same financial security as men have.

That's the part that gets me about any pro-natalist policy; slotting women into a position where they're assuming responsibility for "reproducing the nation" (what an odious phrase that is, sorry), or, as you said, creating the "citizen-parent" is automatically going to produce a class of predominantly female sharecroppers, exchanging reproductive capacity for arbitrary and capricious benefits. I can't in good conscience support any programme that results in especially women being financially dependent in that way, whether to their family members or to the state. To me, that reads as a huge loss in autonomy.

I'm also not in favour of natalist policies simply because they elevate reproduction to an unhealthily high societal priority. Too many people treat this as if it's some kind of existential threat, and that is incredibly bogus. If societies were going to collapse because of low birthrates, they would have done so right around or because of the time I was born, which was absolutely the nadir of the baby bust...

Also, the citizen-mothers model of gender equality is only equal for the cisgendered.