Men vs. Women Cartoon: A Short Overview of Stereotypes

Notice that the woman can’t go on a business trip because she’s (literally) tied to the house. Also, both men and women have the same image of the “ideal partner”–someone who cooks, cleans, and cares for the kids, though of course the man who wants this is a jerk and the woman who wants this is, presumably, dreaming.

At the very end of the video it says “stereotypes?” I don’t know what the intention of the makers of the video is–to parody stereotypes, or if they actually accept them, but it doesn’t really matter, as far as I can tell, because the video is useful either way.

Good for providing a quick, funny overview of lots of stereotypes and the way our gender myths lead us to believe that men and women literally do everything differently. Also, you can pick up a little Italian.

NEW! In an example of the “men and women are totally different!” trope, Rachael H. let us know about Maxim’s helpful flow charts showing how men and women argue: 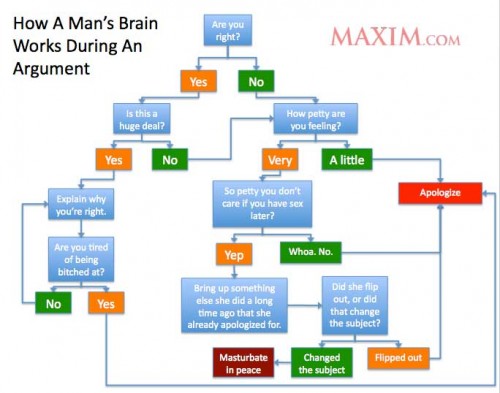 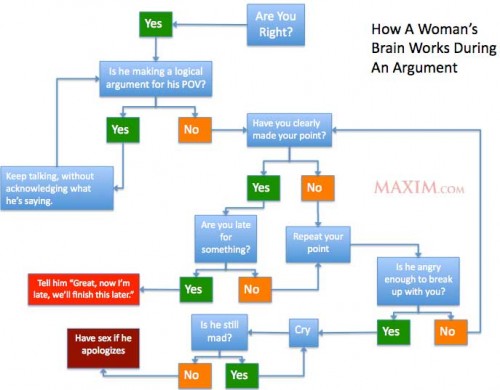 NEW! (May ’10): Juniper, Corina C., and Dana G. sent in another example of this genre, this time videos by members of Harvard’s sailing teams:

Also, notice how the woman often talks like a child (particularly obvious in the shopping scene).

But I'm really puzzled about what they were trying to accomplish with this video... It's not a parody because the authors are not looking at the stereotypes from a perspective that might make them funny.

And the question at the end doesn't make any sense... What else could they be if they're not stereotypes?!?

Yes, very confusing. But at least there were a few moments where patriarchal structures have been appointed (of course as a global fact and less in a emancipatory way):
- in "business trip": a woman can't travel like a man, cause she is bounded to the household
- in "handbags": the woman got a spray with the name "alarm" on it in her bag. I read this as a self-defence tool. But maybe it's just to keep dogs away...
hmm...still very confused.
Maybe it's a very weird way to tell that in the end we are all the same (which is also weird). We are all (smiling) stars and the rest is just stereotypes (which we can smile away)!

This looks like a short film funded by the European Community and the regional government in Lombardy to contrast and challenge our stereotypes of men and women. Not particularly incisive though: I hope the winning project was better.

My mother-in-law sent it to me with a note about how true the differences are. I'm not sure I agree with her but that's neither here nor there.

Thanks for posting it.

Really a piece of garbage.

It looks to me like the kind of film that would be used in a class, to be followed by a great deal of discussion. Like showing old ads to provoke discussion.

The star seemed to me a whole individual, rather than a couple.

[...] women argue (Women are crazy! Men put up with their crap so they can have sex!) and we added it to our post of a video showing a range of “men are like this, while women are like that!” [...]

"The “female” is a circle and the “male” is a square (a very common type of imagery–things depicting masculinity are often angular, while those evoking femininity are often round or curvy)."

Actually, I'm pretty sure that's how genealogical charts are drawn. It's an arbitrary choice to differentiate easily when reading and creating charts. I doubt the first anthropologists/genealogists to use these charts really sat down and consciously thought about it. Researchers use these conventions to draw up charts for animal groups, as well.

Actually, in anthropological kinship charts, the female is a circle, the male is a triangle (pointy end upwards) and the square is gender-neutral, often used for 'ego', i.e. the point of reference of the chart, if it doesn't matter which sex that 'ego' is.

Please note that Harvard Sailing Team is an NYC-based comedy group and in no way affiliated with Harvard University or its sailing team. You can see their website here: http://www.harvardsailingteam.com/

This is extremely sexist. It’s actually ironic how sexist this is. “Men are never right” - there literally is no option for a man to be correct. It’s humor but not humor. This is like the person who says some terrible joke that’s offensive, and nobody laughs because of how awkward it is. Plus women would go apeshit on you guys If you said women are never right because “InEqUaLiTy!”. Love how the website try’s to sound scientific but it’s really just made by some sad virgin who is drinking white wine out of a box.