Hmmm… which Midol ad will you hate/love the most?

This one is from the 1990s (found at Feministing):

This is a brand new ad campaign from Midol (found at MultiCultClassics).  The text says “Reverse the Curse!”  The curse, of course, being women’s punishment for original sin. 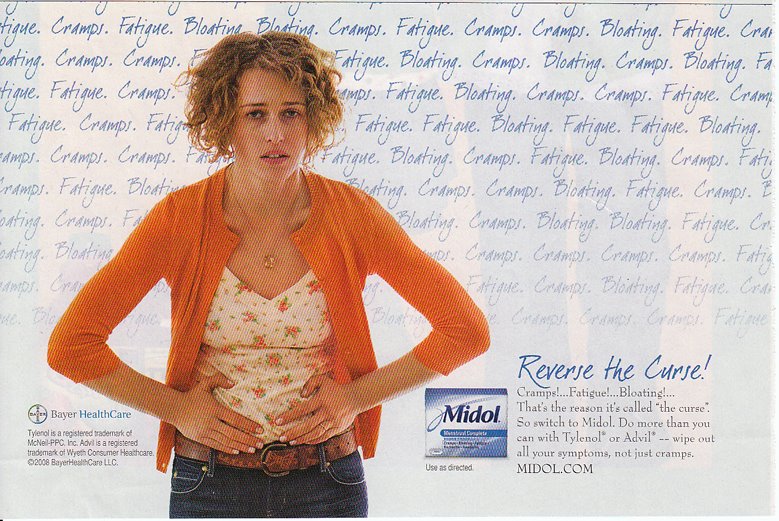 I don't like the slogan in the last campaign at all (I doubt many US women in their 20s and 30s have ever seriously called it 'the curse'--so why re-introduce such a loaded term?). But at least in the last image, the model is indicating something specific about cramping. The earlier ads might let you believe that premenstrual discomfort is about cramps in your legs, or in your earlobes, for all they tell you.

Plus, doesn't "the curse" refer to pain in childbirth, and not random menstrual cramps?

Other than the slogan, yeah, at least the last image is being more specific about symptoms.

The post below about alcohol refers to it as a curse. Do you infer that ad to mean that alcohol is punishment for something?

In the original(ish) post from the Feminisiting article, there is a response from Midol to complaints about the phrase, "Reverse the Curse." They say that they're reclaiming the phrase for the power of women:

In response to your email, many women easily relate to the colloquial phrase "the curse" to describe the full spectrum of symptoms they may encounter during their menstrual cycle. By using the phrase the "curse" to refer to these symptoms openly in our advertising, we are actually hoping to reinvent the meaning behind the association and help reduce some of the stigma that can be associated with a woman's period.

This response from the company puts the other two ads into interesting perspective. If you believe them, then all three can be seen as a sort of empowerment for women -- the first one allows Betty to return to her "real self," the second one lets the woman be PMS-free but still have opinions, and the third one frees the woman from the "curse" of cramps, fatigue, and bloating...and from stigma that comes from calling menstruation things like "the curse." However, practically the only empowerment that these women are given by the lovely little pill is over their own bodies. This links directly with ideas of female-nature connection, perhaps also female-emotion connection. What message, then, is sent?

There are also issues of authenticity in these ads, where the women are attempting to return to their "real self," someone without the uncomfortable accompaniers to menstruation. "I am not-me for a week out of the month and must take medication to become me again during that time." People with menstrual symptoms might agree with this statement. But they also might have integrated this experience into their concept of their "real self," as someone who is flexible. This sort of message precludes this possibility. At the same time, it works to denaturalize menstruation and naturalize the use of Midol.

Love the way the woman in the 1990s ad for Midol keeps looking at the cue card and then the camera. Maybe wandering eyes are also part of her 'strong opinions'.