A while back, Captain Crab sent me a link to Baby Couture Magazine (“We put the ‘coo’ in couture”): 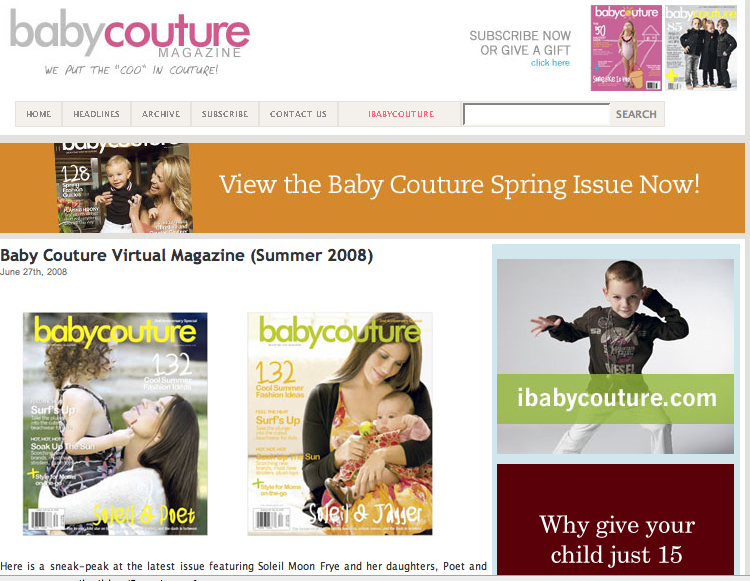 It is, as far as I can tell, a magazine dedicated to how to raise a kid very stylishly. The magazine features fashion spreads of kids with information on where to get the clothes, just like women’s magazines such as Vogue or Glamour. There’s a section where you can send in pictures of your kids to see if the magazine might want to use them as a model or just “…show off your children (and their outfits!)…”

In the caption of a photo of Salma Hayek currently up on the site (posted on June 20, 2008), we learn about her daughter, “Valentina’s father, Francois-Henri Pinault, is reportedly the 3rd richest man in France, and owns and runs PPR (subisidiaries of which include Gucci, YSL, Balenciaga, etc).” 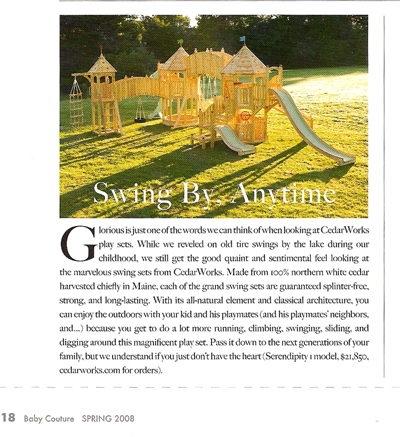 About the Nurtured by Nature line, we learn,

…it is a fabulous baby shower gift as well (you know, when they open your present at the shower and other parents look at you like that “momma who just knows her thang”). Anyway, they are not mass-produced so they may be on the pricey side (it says on their site that a Nature’s Dream gift set is $200.30).

Yes, that might be just a tad on the pricey side for most people. I went to the company’s website and found onesies running from $22 to $99. I’m all for non-mass-produced items made from local materials (in this case, New Zealand-grown merino wool), but…$200??? For a baby gift set??? I bought some of my friends’ babies’ presents at resale shops.

This could be interesting for several different kinds of class discussions–the class element is obvious, not just in terms of how much things cost or who the audience is, but also ideas of parenting and how they differ by social class (for instance, as far as I know my friends and family members aren’t offended if I buy nice used baby clothes at resale/consignment shops, but I suspect that if you gave such a gift to the type of women who read Baby Couture, you would be a permanent outcast–something to keep in mind if you’re trying to extract yourself from such a social network).

You could also discuss changes in parenting overall, though, not just among the wealthy. In the book Parenting, Inc: How We Are Sold on $800 Strollers, Fetal Education, Baby Sign Language, Sleeping Coaches, Toddler Couture, and Diaper Wipe Warmers–And What It Means for Our Children, Pamela Paul discusses how parents confront more and more products they are told any good parent must buy for their child (such as “educational” products that have no shown positive effects on learning), so that book might provide some interesting analysis about why we think we need these things. The whole topic brings up a number of interesting questions about parenting in general: what does this mean about how parents who can’t (or won’t) afford all these things are judged? Why do new parents increasingly look to the marketplace to tell them what they need–and how–to raise a child? How does middle-class fear of “falling behind” play into this whole trend? Why have we become so convinced that raising children requires huge amounts of “expert” advice and purchased products?

NOTE: Well, I have to say, I didn’t actually believe there were such things as $800 strollers–that just seemed exaggerated–but for fun I did a quick search before I posted this and behold: 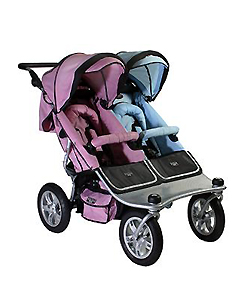 The Boy Meets Girl Pink & Blue Limited Edition Valco Twin Trimode, for $825 (though there are several hundred dollars’ worth of upgrades available on top of that). Of course, it’s also good that it’s color-coded so you know which side to put the boy and girl in. Also, it’s described as an “all-terrain” stroller. All-terrain stroller??? Where exactly are people taking their kids these days? There are a lot more similarly bizarre products at Let’s Go Strolling.

So I learned something today: No matter how much the upper limit is that I can imagine for a baby product, I need to add many, many hundreds, or even thousands, of dollars to it. And upper-middle-class parenting has become very, very strange.

And I owe it all to Captain Crab!

I'm laughing here...because I guess we're in the beyond-strange zone. No matter how expensive a baby product is, triple or quadruple its price if it's in any way adapted for a kid with disabilities. If it's even the slightest bit "special"--scaled up, different belting, different padding --AND if there's any chance your health insurance will cover it, a stroller will cost thousands. I wish I was kidding, but we're on our second Convaid stroller (our insurance pays four figures for the basic item, with hundreds more for additional pieces). We also have a MacLaren stroller meant for the "special needs" market--which really only means it carries a larger kid, up to 100lbs--with *no* extras (no canopy, no storage section, no cup holder, no tray, no cushions, etc. etc.), that's $600 minimum.

Oh--and all-terrain wheels are actually pretty useful if you live at the beach. Or if your town has decided to "beautify" the downtown shopping district with cobblestones or other bumpity-bumpity sidewalks and crosswalks. Those are our bane.

Some of us parents like to hike and trail run.
We bought a $500 all-terrain stroller (the "Bob") when our daughter was born. For the first three years of her life, she was in the Bob for all our long hikes and trail runs (we're talking back country hiking here in British Columbia). It was our major baby expenditure (no crib etc) and well worth it.

I guess maybe it's sort of like a truck or an SUV: there's a small part of the population for whom the product would actually be necessary/useful, but many people who buy it wouldn't actually use it for the things that set it apart. Just like many people who have trucks don't really haul things, I have a feeling that most people who buy "all-terrain" strollers don't go hiking or running or any of those things. So I just wonder how many people buy them for all those things...and then never actually do anything where they're necessary.

Gwen's reply reminds me--we didn't buy a crib or furnish a nursery either. So, no expenditure there. But a good quality sturdy stroller is worth some investment --in the baby's comfort and safety, AND the parents' own health. The back, shoulder, and wrist pain from lifting, folding, unfolding, and pushing a badly made stroller every day for a year or two per kid, over bad sidewalks--definitely not worth the difference.

It's hard to fault first-time parents for being unrealistic about their post-partum activities--a lot of people go into parenthood with ambitions that don't withstand the reality of life with babies and toddlers.

The difference between an SUV that never sees rugged terrain and an expensive stroller is that the SUV is an environmental and traffic hazard, while the stroller isn't--and even if the stroller never sees a wilderness trail, it's still better than a flimsier stroller on playground surfaces (sand or woodchips), uneven sidewalks, beaches, etc.

So: An expensive stroller that's just for prestige or cuteness is ridiculous, but a stroller that's expensive because it'll last longer and be sturdier and more comfortable might make sense if it's in the budget.

I think Investing in good quality strollers is worth as it can also be useful for my kids in the future. So, I bought a Zooper Tango Stroller as it is extremely comfortable for my two kids. Looking after two kids is not an easy task. It is not like the stroller is very sleek but it had an array of features. The stroller features quick release swivel lock wheels in the front and die cast front latch frame lock and wheel housings of extra strength. The stroller can be easily maneuvered and smoothly moved on any kind of terrain. The Zooper Tango double stroller models come with large extendable zipper canopies which act as weather shields.