CORRECTION/CLARIFICATION: I am reposting this because I want to make clear that a couple of things that people picked up on in the comments are MY mistakes/confusing wording, not Jackson Katz’s. First, in regards to the Rambo movies, I was confusing Rambo:First Blood Par I, which came out in 1982, with Rambo:First Blood Part II, which came out in 1985, which is what Katz is quoting in the movie. I just googled the movie to find the year it came out and didn’t notice it was for Part I, not Part II. I have corrected that below.

I just wanted to a) correct those two things and b) make it clear that they were my mistakes, not Katz’s.

In the documentary Tough Guise: Violence, Media & the Crisis in Masculinity, Jackson Katz discusses how images of masculinity in pop culture have changed over time, and particularly how in the 1980s and 1990s images of male heroes got larger and more menacing, as well as hyper-violent. He uses Humphrey Bogart, Clint Eastwood, Sylvester Stallone, and Arnold Schwarzenegger as examples. I’m basing my discussion of the images from movies on Katz’s analysis.

In this image of Humphrey Bogart (found here) in The Maltese Falcon (1941), his gun is very small compared to his body. His body language is not particularly imposing or threatening. Keep in mind this was during World War II (though the U.S. had not joined yet) and that machine guns had been invented during the Civil War. So Humphrey Bogart conceivably could have been shown holding some sort of automatic weapon instead of a small handgun. 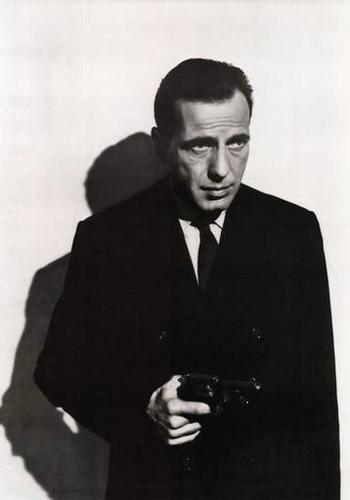 Then we have Clint Eastwood in Dirty Harry, from 1971 (found here). The gun has gotten much bigger and the body posture a bit more threatening. 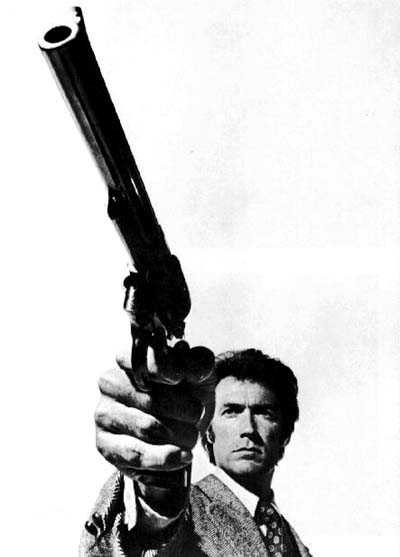 And in 1985 we get Rambo:First Blood Part II (found here), a military revenge fantasy in which a Vietnam vet gets to finish the war the U.S. military wasn’t “allowed” to win, presumably because of weak, feminized elements that controlled the government. Stallone’s body is huge and muscular, and the gun has gotten larger and more deadly. 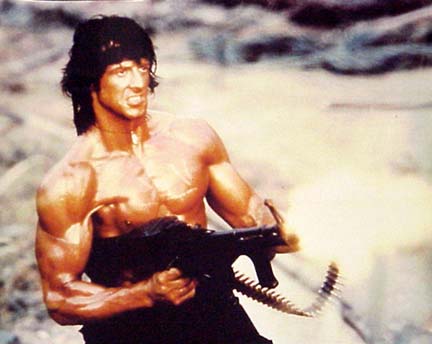 Katz attributes these changes in images of masculinity to a growing concern in U.S. culture that we are somehow being “feminized” and becoming weak. He argues that the loss in Vietnam (or lack of an outright win, if you prefer) as well as political and economic gains by women and non-whites caused a cultural panic about the status of white men. As these men were supposedly losing power and status in everyday life, cultural images of them emphasized strength, power, and aggression as a version of ideal masculinity.

Here is a clip from Tough Guise:

And here’s a clip that takes the Tough Guise intro but adds some other images:

I was thinking about this because when I was in Oklahoma, I was around a lot of trucks, and specifically, a lot of old farm trucks. And one day when I was standing next to an old Dodge Ram, it hit me how much less…I don’t know…imposing it was than newer trucks. It seemed like a cute little toy truck. Here’s a picture of a 1985 Dodge Ram (found here): 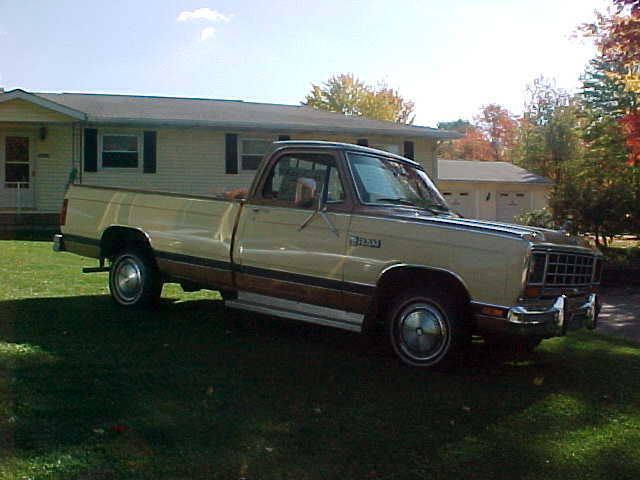 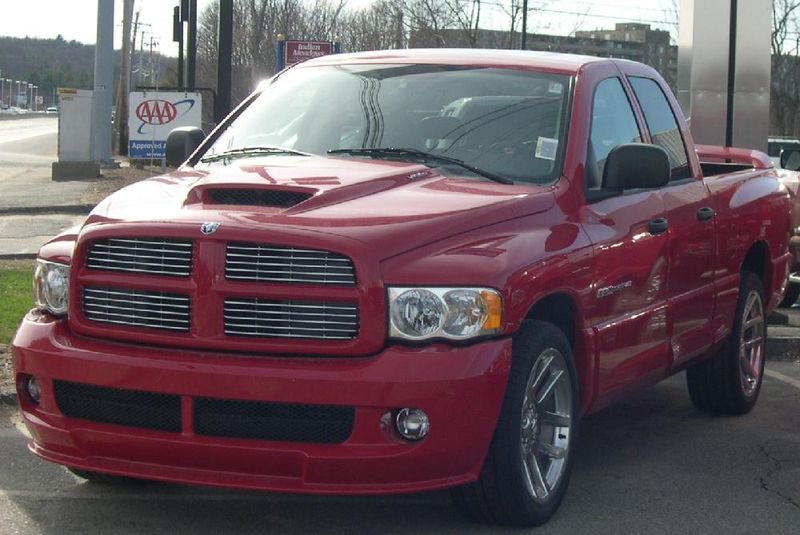 Looking at my family’s old farm trucks (and we’ve got a collection of rotting, rusting trucks dating from the 1950s on; I did not post pictures of our trucks because my grandma would kill me for exposing our farm junkiness to the world), I kept thinking, “We used to haul cattle with that?” or “That was considered sufficiently masculine at one point?” And the answer is, yes. Yes, they were.

Now, I’m certain that a lot of the redesigns had to do with advances in safety and efforts to improve fuel efficiency (by making the truck body more rounded, for instance). But there also seems to be a pattern in trucks today to design their headlights and grills to look sort of “mean,” if you will–like they’re snarling or growling.

I’m not necessarily saying there’s a connection between Katz’s work and the way trucks have been redesigned to look meaner and more aggressive…but it just got me thinking.

Of course, as a farm kid, what strikes me about trucks is the way the newer designs make them less functional for the types of things you see people doing in truck ads. While the cabs have gotten larger, making room for more passengers (that is, more like a car), the beds have gotten smaller, so you can’t carry as much (or as long of) stuff in them–and carrying stuff in the back is what you supposedly need a truck for. Yes, you can still stick more stuff in the back of, say, a new Dodge Ram than in a lot of cars, but I’m just sayin’. (Also, you’d be shocked at how much stuff I can get in the back of a Honda Civic if I lay the seat down and am really motivated. And my mom once brought a 130-pound calf home in the backseat of a car–I had the fun job of trying to keep him from attempting to crawl into the front. And we had a woman in my hometown who used to haul pigs around in the backseat of her Caddy.) A lot of things we used to haul around in the back of our trucks wouldn’t fit in the beds of new trucks, or you couldn’t fit nearly as much of them. And of course the majority of people who buy trucks for their big motors aren’t doing the types of things (driving through extremely rocky or muddy country, hauling trailers full of cattle, etc.) that require such a huge motor in the first place. So why not just buy a car?

Just some thoughts that struck me while hanging out on the farm.

I think there's no question here: the new Dodge Ram looks like it did steroids. Also, I believe you are referring to Rambo II - First Blood was a quite different movie. The series started out pretty serious, as the story of a Vietnam veteran with a serious case of PTSD, but soon the military theme and John Rambo where fetishized to ridiculous ends in the sequels

It's funny... I never thought of those newer style of trucks as being more masculine. I just thought they were ugly as sin! But now, looking at them side-by-side, I see what you're getting at. Has the truck supplanted the sports car as surrogate phallus?

I wonder what it says about my masculinity. Then again, I don't really care for the NASCAR stickers and "little-boy-peeing-on-something" stickers that so often decorate trucks either, so I suppose by those standards I must be missing something.

I was thinking of the same thing as for the trucks the other day, while looking at barbecues. They've definitely gotten bigger and "manlier".

I was thinking of the same thing as for the trucks the other day, while looking at barbecues. They've definitely gotten bigger and "manlier".

I second KJK::Hyperion objection: first blood was quite a different movie from the follow ups, it dealt with PTSD and how vietnam veterans coped with daily life. Surely it was a violent movie and the M60 machine gun became quite an iconic image, but it was a intelligent movie, not macho-trash.

As for Terminator 2, the weapon Governor Schwarzenegger is using isn't part of his body, but a "normal" weapon (a Gatling gun) he's holding and firing from the hip. It's the arch-enemy of our hero (another cyborg) that can mold its body into weapons. The interesting thing is that the enemy is more a "normal" man, not exaggerated like Schwarzy.

The second one is just a small issue but with Rambo we're talking about a whole different movie... This doesn't cast a very good light on Jackson Katz's research. I mean, I quite agree with the observations, but getting basic facts straight would have looked much better.

@Julie: i think the BBQ thing is more about having a more "professional" (i.e. like in real chefs' kitchens, with functional and compact forms) look than a masculine one.
it's still a very "manly" thing to desire professional tools even for once-in-a-year tasks, but it's a little different :)

[...] also Gwen’s post on changing ideals of masculinity (measured in guns and cars) inspired by Tough [...]

Our culture has been officially neutered by Femi-NAZIS into group think.

So much for diversity of cultures. Amazing how those that are so much more enlighten end up seeking to ban and restrict the rights of others. Whether it is music, art or video games. It always comes down to control doesn't it. What we think or see.

Nazi Germany was that way. And during Germany's great economic troubles a charismatic leader arose promising the masses state controlled everything, even health care. Nazis were socialists, nationalist, vegetarians, gun control advocates, bigots, extreme anti-rights and freedoms of other cultures they didn't like. And used national laws to oppress their own populace. Nazis believed they were superior to all others. Especially intellectually. Those who they looked down on Nazis tattooed with numbers to track them. And then eventually gain public support for genocide by nazi law that was supported from 24/7 public propaganda of non-stop demonization.

And what country traveled across the seas and saved all of Europe from the Nazi iron fist of world domination and fought real battles spilling macho blood of all those mentally corrupt and delusional violent American masculent males?

The real world is a place full of countries with the next world dictator waiting to take control. And they will only be defeated by those who have been raised in a culture that permits freedom to be masculine and the unselfishness of sacrifice to insure others enjoy the same freedoms we have here that are daily taken for granted and ridiculed by those who have the luxury that was paid for by those who fought and died for them.

I think the comparison between legislation on guns and the holocaust is quite laughable myself.

And for the reccord, it was the Soviets who took down the Nazis, not the americans, though the americans did help by opening new secondary theatres, and supplying the soviets with trucks, food, tanks, planes, etc..

I can think of no better example of perfect masculinity than Christ, who was God but also fully man. He taught Love, turning the other cheek, resisting temptation and laying down one's life for another. That is the mark of a real man, and it takes true strength.