In a 1987 article titled “Sex and Death in the Rational World of Defense Intellectuals,” Carol Cohn discussed the way in which “defense intellectuals” (the scientists and strategists behind war) used language that was rife with sexual metaphors, sexual imagery, and the promise of sexual domination. Here are some of the words and phrases she heard these men (mostly) use to refer to military weapons:

“releasing… megatonnage in one orgasmic whump”

India’s first explosion of a nuclear bomb described as “losing her virginity” and then the United States asked whether they should “throw her away.”

An explanation of why the MX missile is to be placed in new silos: “because they’re in the nicest hole—you’re not going to take the nicest missile you have and put it in a crummy hole”

“Then, just when it appeared as though the thing had settled down into a state of permanence, there came shooting out of the top a giant mushroom that increased the size of the pillar to a total of 45,000 feet. The mushroom top was even more alive than the pillar, seething and boiling in a white fury of creamy foam, sizzling upward and then descending earthward, a thousand geysers rolled into one. It kept struggling in an elemental fury, like a creature in the act of breaking the bonds that held it down.”

With this in mind, consider the costume worn by Miss Atomic Bomb (1957). Yes that is a mushroom cloud or, dare I say, an “orgasmic whump” spreading out all over her. A full-size cardboard cut-out Miss Atomic Bomb, that is Lee Merlin, welcomed Gwen and I to the Atomic Testing Museum in Las Vegas. Here she is in all her glory: 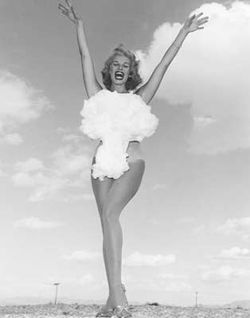 I want to give a shout-out to Vivek who mentioned Merlin in response to our previous post on the Atomic Testing Museum.

Sociological Images » ENGLISH: A SIGN OF YOUR FREEDOM — January 3, 2009

[...] me of when Lisa and I visited the Atomic Testing Museum here in Vegas last year (inspired posts here and here). There was a video about atomic testing in Nevada with a lot of scientists who took part [...]

[...] me of when Lisa and I visited the Atomic Testing Museum here in Vegas last year (inspired posts here and here). There was a video about atomic testing in Nevada with a lot of scientists who took part [...]