Be a Good Parent Through consumption

I’m always interested when I see ads that play on parents’ fears of neglecting their children as a way to sell them stuff. Middle and upper-middle class parents often encounter, and adopt, a parenting ideology that requires the input of lots of money, time, and emotional energy to be a “good” parent. Parenting is commodified into a set of things parents feel a lot of pressure to buy to prove that they love their children and care about their futures–and don’t want them to be social outcasts.

My mom got pregnant with me when she was 16 and I grew up decidedly working class, and the parenting style I was used to was basically, “The kid’s still alive, so I guess I did a pretty good job.” My mom may have taken this attitude to extremes a bit, since she was known to put me in a harness and tie me out to the clothesline so she didn’t have to keep such a close eye on me when she was busy around the house. Give her a break–she was a teenager! It seemed like a really good idea! (And admit it: there’s part of you that is thinking, “That’s brilliant!”)

My point is, I’m always interested in the ways we seem to always be raising the bar on what is considered good parenting, and “good” parenting is usually defined by middle class standards–though we also often criticize middle and upper-middle class parents for supposedly being distant and self-centered and for pushing their kids too much to succeed. So it’s a catch-22: working-class parents don’t have the money to buy a lot of the products or services we think loving parents must provide their kids, and middle-class parents who do provide them may be criticized for doing so.

Anyway, the other day I came upon these two ads, both of which try to sell products by making parents afraid that if they don’t, they’ll be neglecting their kids. This first one makes it clear that this tactic isn’t new; it’s from 1919: 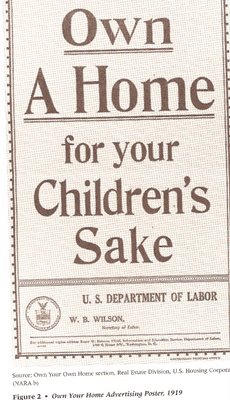 I found this ad in a Las Vegas community magazine. The text lets you know that silver crowns can be unattractive, and that for your child’s sake you better pay for the white fillings (which are more expensive, and the extra cost is often not covered by dental insurance, even when people have it). I also like that metal fillings are called “bling.” Awesome.

Some of the text below the picture:

Being able to see the dental work in your child’s mouth is not always an appealing appearance. A healthy, natural looking smile for your child is our goal…Now you have a choice!