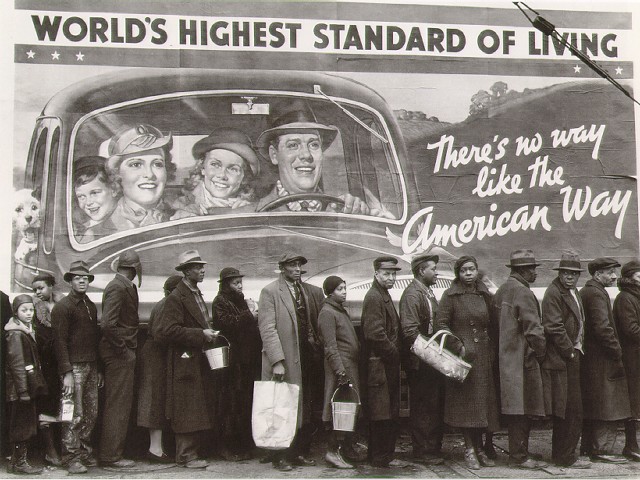 According to this site, the photo was taken by Margaret Bourke-White; this site, where you can buy old issues of LIFE magazine, lists the photo in the index for the February 15, 1937, issue. Apparently the people standing in line were flood victims.

This is a great image for sparking discussion about “the American Way” and what that was meant to be (clearly white and presumably middle-class, from the mural), and the ways in which non-whites (and poor whites) are often invisible in depictions of what America is. And, of course, it could be a great image for a discussion of rhetoric and propaganda (for instance, murals proclaiming how wonderful the standard of living is even though the Great Depression was by no means over).

Remember the American Way is always synonymous with the white way? That is why an all American girl is always white, blue eyed and blonde. Minorities and the disadvantaged dont figure in this equation one bit.

Margaret Bourke-White was a fantastic photographer, I have a book of her early work but can't find one of her later work, which is her political era. She photographed Gandhi and Nehru, Nuremberg after the Blitz, and plenty of scenes like this around America. If you can her later work, it is well worth checking out. And if you find a book of it, please tell me!

A few days ago we were making a list of things a superheroe needs. Like the ability to drive any typ of vehicle and stuff like that.

If you take a look at comic superheroes they represent a lot of the american way. Must of the main ones (spidey, hulk, thor, ironman, 4 fantastic, batman) are white, male adults that, when they are not fighting crime, really experience the american way.

Look at EVERY Negro state or country in the world and the picture is the same.
Figure that one out ? ......No brainer ...right ?

why they have a sad face?

I just downloaded "There's No Place Like America Today" by Curtis Mayfield. Loved the album cover art and wanted to know what it was inspired by. Great, great photograph.