Valuing Dads in the WNBA 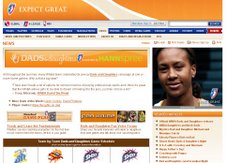 I went to the NBA website and looked around, and unless I’m missing something, there is no Moms and Sons (or even Dads and Sons) page.

I have a theory about this. From the beginning, one problem the WNBA faced was not appearing to be a “lesbian league,” which would presumably alienate advertisers and audiences. To highlight the femininity of the players (because pretty girls who wear makeup can’t be dykes, right?), players were encouraged to wear makeup (and were even sent on Oprah to get makeovers) and players with husbands, boyfriends, and children were photographed with them and their profiles made sure to stress their family roles. When the WNBA began, the website had a forum about the uniforms (potential colors, shapes, styles, etc.), and there was some discussion of making the players wear skirts. [For an interesting discussion of gender in the WNBA, check out: Sarah Banet-Weiser. 1999. “Hoop Dreams: Professional Basketball and the Politics of Race and Gender.” Journal of Sport & Social Issues 23: 403-420.]

The Dads and Daughters page fits into the efforts to make the WNBA seem “family friendly,” i.e., not lesbian. The importance of men in women’s lives is reaffirmed (and also the idea that girls get their athletic abilities from their dads, not their moms). It makes it clear that the WNBA is not a “women only” social space.

The NBA has no need for a similar emphasis on women because we assume that male athletes are heterosexual (in fact, playing sports is one of the ways men prove they aren’t gay).

That's an interesting take on that section of the page. My assumption is that this has more to do with the latter thought in your post about "mak[ing] it clear that the WNBA is not a “women only” social space." than it does about "not appearing to be a “lesbian league,”"...though i certainly could be wrong about that. Their new "Expect Great" ad series indicates it's (the not women only thing) something they are very interested in combatting. Obviously, it could be a little of both.

Are we still doing that lesbian-panic hair/makeup/deportment thing? I thought that went out with the All American Girls Professional Baseball League...

Well the coach who dated her player didn't do much to get rid of that stereotype. But there is a strong and highly visible lesbian following of the WNBA and that in itself or the perception of does turn away everyday orthodox families who are one of the markets the WNBA is aiming for, hence the ad campaign.

The WNBA's marketing strategy has long been to promote itself as a family league, a place where you can take the kids (especially the daughters) on a wholesome family outing. The emphasis on fathers and daughters ought to be seen in that light. The NBA's core audience is, of course, men. The WNBA tries to get those NBA-fan men to take their daughters to WNBA games by playing up the bonding aspect. The assumption, of course, is that men will only be interested in the WNBA if the women in their lives are.

But a big part of the reason the WNBA has tried to stress their "family friendliness" was an effort to AVOID being seen as a lesbian league. You could be family friendly and focus on moms--or just PARENTS generally--but there is no similar program.

The 2002 video, Playing Unfair, makes some of the same points about the WNBA, talking about how family images were often used, like photos of Cheryl Swoopes, along with husband and child, instead of just Cheryl Swoopes winning the MVP/championship/gold medal. Then again, in 2005, Swoopes publicly announced that she is a lesbian and became one of the most high profile athletes in a team sport to come out publicly.

http://failblog.org/2008/03/14/basketball-fail/#comments
you've often noted that men playing sports are exempt from homosexual name-calling and accusations, but this "failblog" post and the resulting comments offer a different take.

[...] The idea that women athletes aren’t sufficiently feminine has been around as long as sports have been around. Today, the feminizing of athletes is ubiquitous.  See our posts on Serena Williams’ ESPN cover, Candace Parker “is pretty, which helps,” press photos of women athletes in dresses, groundbreaking woman sailor is also pretty, sexualizing Olympic women athletes, diets of champions, media portrayals of woman atheletes, and valuing dads in the WNBA. [...]