Kate N. pointed us towards this article in the New York Times today discussing 25 years of Marines recruitment aimed at women. Below is the content of their slide show. 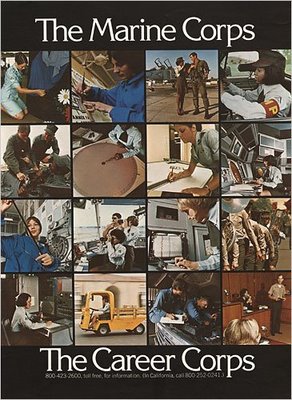 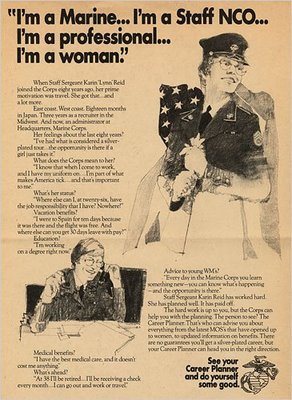 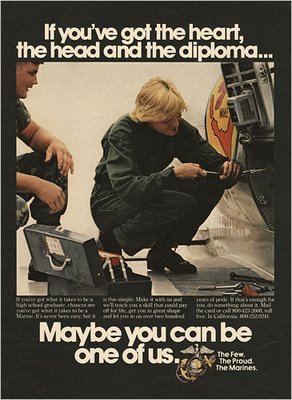 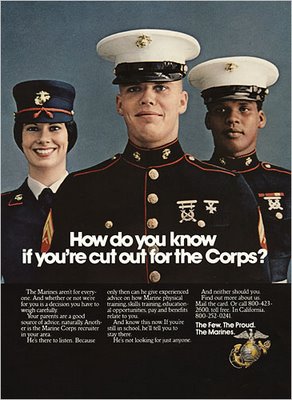 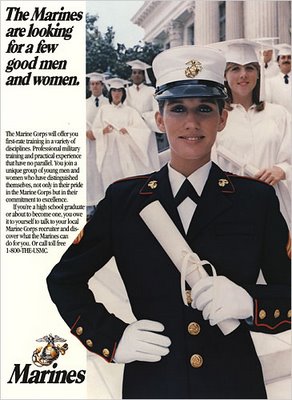 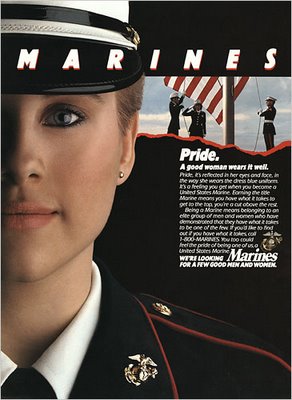 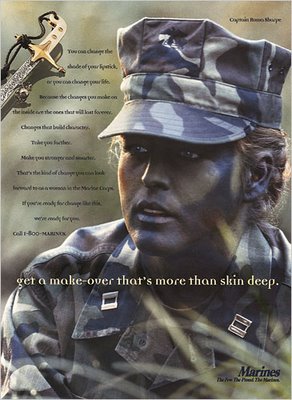 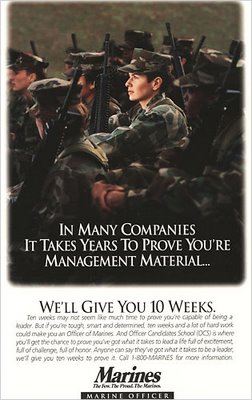 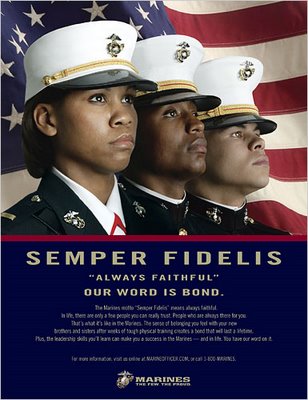 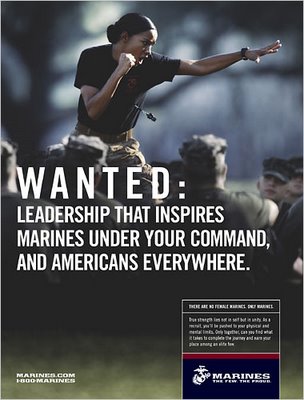 The article says that the Marines have only recently began a concerted attempt to recruit women. Does anyone have any information about the shift in the racial targeting? Or is that just an artifact of the slide show?

Thanks so much for the tip, Kate!

Also in military recruitment: which military would you join?, the homefront, and war as entertainment.

With the statistics on rape in the military, their low prosecution rates and the recent pregnant marine case in which they delayed investigating, I don't know how any woman would even consider enlising in such an organization.

"Blacks constituted 16 percent of all those drafted, compared to 11 percent of the total national population

With the end of the Vietnam War in 1973 came the advent of the all volunteer force. Other changes included a drastic increase in pay and a policy of equal pay for equal work. Enlistments soared. Whereas Black membership in the Army of 1968 was 12 percent, it rose to 32 percent in 1979.

By the end of the draft in 1973, blacks made up about 17 percent of the enlisted force. By the early 1980s, the proportion had nearly doubled.

n the Gulf War, about 25 percent of the American military was black. At the top was Gen. Colin Powell, chairman of the Joint Chiefs of Staff, the first black man to be the U.S. militarys top commander. function."

With the statistics on rape in the military, their low prosecution rates

Instead of guessing on this, I asked two acquaintances of mine. The lady spent twenty years in the Air Force, as a single mom raised a daughter who in turn enlisted in the Marines for four years.

Both said that the statistics on rape were inflated, and in general poo-poohed the reports in the press last year on the matter.

I don't know how any woman would even consider enlising in such an organization.

If you're interested, go ask some why they enlisted. If you keep an open mind on the subject you might be surprised.

I'm curious what happened in 1988 that suddenly caused them to make the woman in the ad look far more feminine. The previous ads, she looks like one of the guys, in 1988 & 1995, the women featured looks far more stereotypically feminine with the emphasis on her curves, the make-up, the earrings, mention of a "make-over", etc.

In or around the 1980
Poster, a recruiting video was made at Camp LeJeune, NC. I was in that video. I saw it ONCE. I was the first woman Marine ordered to inspect and repair small arms, in the 3rd & 4th echelon repair shop, 1978-1982. I would love to find where I might be able to get a copy of this, for my children/grandchildren!

Insightful! Thanks for sharing this note.