Marcello sent us this really fascinating example of political propaganda from an anti-immigrant party in Italy. He translated the text as:

They suffered immigration
Now they live in reserves
Think about it

The implication is, if they let immigrants into Italy, the current residents will suffer the same fate as American Indians. 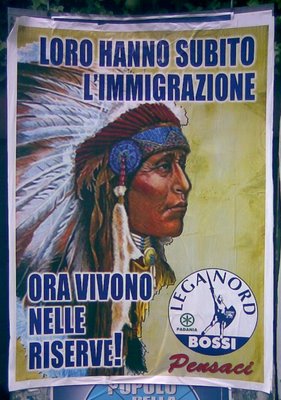 Beside the obvious racist concept i think it’s quite ironic that they identify
themselves with people they would probably discriminate [against] if they ever
met any american-native people here in italy and the fact that they criminalize
the role that the very same “western civilization” they stand for (against the
“bastardization of culture from muslim heretics”, their words, not mine) played
in the american-native genocide.

The gall. The unmitigated GALL. I don't have words strong enough to express myself.

If this isn't one of the finest (read, slimiest) examples of appropriation that I've seen in a long time, I don't know what is. After you've finished kicking someone in the teeth, you don't get to identify with their oppression, nor claim it for your own. You don't. You really, really don't.

And you certainly don't get to do it in the process of justifying further acts of oppressive evil.

[...] 2008:  This fascinating Italian anti-immigrant poster suggests that, if immigration to Italy is allowed, immigrants will persecute the native Italians [...]

Pope Alexander VI, Borgia started the great American Indian genocide, with blessings, cash and a Papal Bull. I am an American Indian presently living and traveling in Italy, for six years now. I heard about this poster and did a google search to find it. It is a strange use of the image of an American Indian. Yes, it is true, the American Indian made no restrictions on immigration. This was because the American Indian does not believe in borders. So it is ironic. The old Indians welcomed everybody and paid a high price. But we are still here, and sometimes quite near. The author of the poster, who made this, is not a good person, the people who made this are filled with fear, fear without reason. I will share this strange Italian poltical image with some other tribal relations.