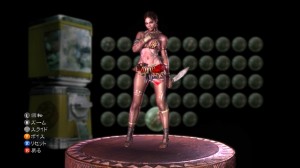 As a fan of this series (of which this is, I think, the 13th game), I want to rush to its defense. But this topic has been covered already in some depth at the racialicious blog:

I'd check that out.

pretty sure it's set in haiti

This made me a little uncomfortable, but given the game title all the violence is most likely related to a bad case of the ZOMBIES.

Resident Evil zombies have always come in all races, creeds, and colours.

Since the other games and movies have been set firmly in the United States, I wouldn't confuse racial violence and torture for brain eating due to an unending hunger. The main character in the first four movies, while sexualized, is a strong female zombie killer. I'm sure there are valid race and gender issues you could pick on in these movies other than the melanin content of the zombie's skins.

I really enjoy discussions about race re: RE (re: RE! I kill me...) but I think we're failing to take into account that this is also a Japanese take on race-- right?

Mordicai: I have not managed to play any of the games, so my comments are based almost entirely on the movies. My recollection is that the zombies in the games up to this point have been majority white, so this could be considered equal opportunity zombie slaying.

For the record, that "tribal" outfit is unlockable - that woman is one of the main characters, and wears generally sensible clothes for the duration of the game. When you win, she puts on a bikini!