While tampons have been around since the 19th century (see the Museum of Menstruation for more history), they really took off in the U.S. in the 1940s. One of the reasons for this was a targeted campaign by Tampax that took advantage of women’s new labor participation during WWII. These newspaper ads from that time period show the ways tampons were marketed to women who were not only working, but wearing pants on the job.

These ads would make for a great class discussion on gender and the homefront during war (not to mention a discussion of women’s work and bodies)– particularly on how gender relations and practices can change (temporarily or permanently) during wartime. 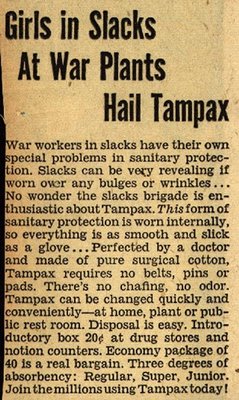 I found these at the amazing database of old ads that Gwen posted about. Thanks again for the link Martin W.!