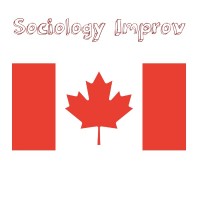 This episode we start with a discussion of violent protests prompted by a question from a listener (Which is great! Send more!). We then talk about Twitter, hashtags, Gmail, and passwords before moving on to a discussion about education and universal preschool.

Links from this episode:

I'm a little disappointed you guys didn't actually talk about Adventure Time. Not that I can think of a lot of sociological discussion to have about it.
I do find it interesting the ways it acts as an extention of, and interacts with web-culture. Oh, and it got a mention on the PBS series Off Book, episode Fan Art: http://www.youtube.com/user/PBSoffbook/videos

Which is a series with some pretty neat cultural commentary, although it's not terribly sociological in its approach.

Also, if you like cartoon shows, the new Avatar series, The Legend of Korra has had some fascinatingly nuanced politics, and a surprisingly developed sense of ethnography for a Saturday morning cartoon. I'm not sure where all it is available, but it's up to episode 8 so far, an episode which featured  a conflict between an over zealous police force, and a large group of protestors.

Nice work, guys, as usual. I liked having the new fellow on, though I seriously miss Arturo. Bring him back!

This was a very interesting article in the news today that I thought of when you were talking about password strengths: http://news.techeye.net/security/older-people-are-better-at-picking-passwords-than-youngsters

Here's a topic I'd like you to discuss: what do mannequins tell us about the performance of gender?

A tip on security questions:
Since they are usually things that people can somewhat easily find about you, I switch it around and give an answer to a question that I can easily associate in the future. For example, with the the mother maiden name security question, I give the maiden name of a friend's mom (a name that I really like). Instead of the model of the first car you drove, you can answer that with the make of the first bike you rode. It can get a little confusing at first, but if you are worried about stuff like this and come up with easy things to remember that are somewhat connected it's a nice layer of security.